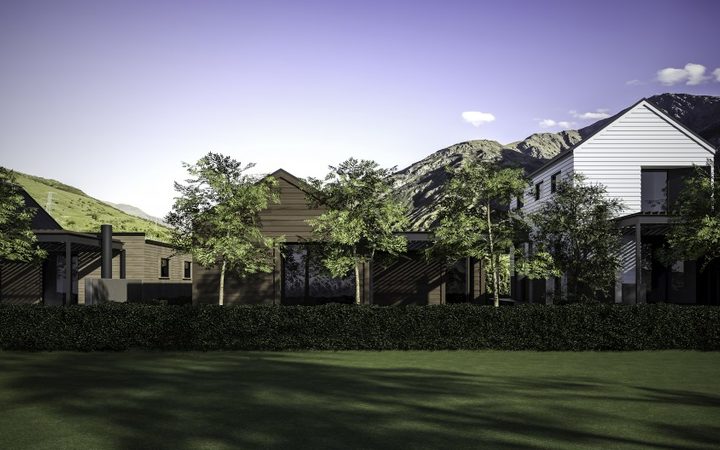 The first SHA in Queenstown, Bridesdale Farm near Lake Hayes Estate, was marketed as a cheaper, affordable development. Photo: SUPPLIED

No houses have been finished in any of the seven SHAs created over the past three years, though dozens are now under construction.

The idea was to bring down prices by increasing the supply of houses. And the seven specially designated areas - fast-tracking about 1000 new homes and two aged-care facilities - do seem to have sped up the process by years, by cutting out community objectors.

But there have been few limits put on sales.

Brett Paterson, 32, grew up in Queenstown. He moved to Melbourne for a stint but came back a year ago with his family, with the dream of buying a section and building a home. He was having to give up on that dream as the prices spiralled out of reach.

It was particularly hard to be born and bred in the area but unable to get hold of a piece of land to call home, he said.

He had watched building companies buying parcels of five to 10 sections from each new subdivision and on-selling them, while he could not get one.

Housing had been left to the market, but the market was not working, and limits should be put on sales so everyone could get a look in, he said.

"We find that frustrating, but it is a free market to a certain extent," Ms Scott said.

"So, unless the council or government was going to put restrictions on who the land can be sold to, there's nothing that can be done about that," she said.

Late last year the council decided to require SHA developers to gift at least 5 percent of the land to her trust to develop affordable houses on - and that was a turning point, she said.

The first SHA, Bridesdale Farm near Lake Hayes Estate, was marketed as a cheaper, affordable development, with sections selling for an average of $210,000.

Stacy Coburn, from the lead agent Bayleys, said it took longer than expected, despite its special classification, but he defended the process as successful and worthwhile.

However, Queenstown Housing Taskforce chair John MacDonald said the SHAs probably would not bring down house prices on their own, because of demand.

He wanted to lift the fraction going to the Queenstown Lakes Community Housing Trust to 10 percent or more in some developments.

His taskforce was also recommending enabling the trust to sell the houses but keep the land forever and control the market, as was done in a number of resort towns in North America, Mr MacDonald said.

People would buy in with conditions, and if they wanted to move on, they would have to sell their homes back to the trust so they could be sold to other families on the waiting list.

The taskforce was working on other ideas, but would not yet reveal them.

Its report will be debated at a full council meeting on Thursday.