A Dunedin city councillor who tried to take on the manufacturing of Cadbury products has unveiled his new plan for a publicly-owned chocolate company. 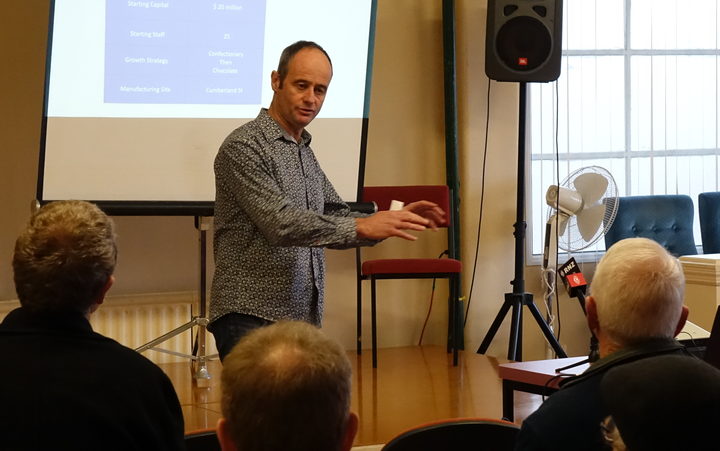 Curious would-be investors gathered at a busy public meeting yesterday to hear Jim O'Malley outline how the company would work.

In June, Dr O'Malley and a group of volunteers created Dunedin Manufacturing Holdings (DMH), hoping to take over production when the Cadbury factory in central Dunedin - run by the American multinational company Mondelez - closes next March.

However, he later withdrew the bid, saying it would be too hard to meet Mondelez's requirements by their required deadline.

Dr O'Malley said he would use crowdfunding website PledgeMe to source $2 million from public investors.

While the finer details of the concept were still being worked out, it was likely those putting forward smaller amounts of $50 to $100 would see their voting rights at the company's annual general meetings represented by a group vote from DMH, which would become an incorporated society.

Those attending yesterday's meeting were adamant the company needed strong worker representation, with Dr O'Malley agreeing the company's new board would include a worker.

The new company would be based on respect, he said.

"We're looking for lots of small people to invest in this so this is a large number of small owners as opposed to a small number of big owners."

It would start with about 20 workers, producing a million bars of chocolate a year at an as yet undecided central city location.

Dr O'Malley said once he had helped elect a board and a chief executive who cared about the company's values, he would step away from the business.

He hoped the company will grow and hopefully take on a few former Cadbury workers.

"I put this a little bit like a life boat coming up next to the Titanic - we can only take a small number of people at the moment."

He wanted to keep Cadbury workers' contact details on file in case more jobs cropped up in future, and would not be satisfied until each redundant Cadbury worker had a new job somewhere.

OCHO owner Liz Rowe said she heard about what Dr O'Malley was trying to achieve, and offered up her own business.

"You can get too stuck on holding onto control and I think now is actually quite a good time for me to say, 'It's got this big, it needs other people and other ideas.'"

She and her small crew would be safely absorbed within the new company, and for the foreseeable future the OCHO brand would remain, she said.

Would-be investor Stuart Gunn, himself a small business owner, attended the meeting and liked what he heard.

"I didn't know what to expect when I came in, but everything I saw, the questions that came from the floor, the positive vibe in the place. The whole idea is just outside the box, I just love it."

Mr Gunn said he pledged $200 to the initial Cadbury manufacturing idea, and would consider upping that amount.

Retirees Ian and Valerie Miller also wanted to follow their pledge through with an investment.

Mr Miller said after hearing the business plan, he believed it could work.

"I can see, after today, taking Cadbury over wasn't possible, it's just a huge step.

"Whereas this way, you start small, and you grow."

The next two months will be spent electing a board and chief executive.

Dr O'Malley said when the lights go out at Cadbury on 31 March, he wanted the new company to hit the ground running.