The Postal Workers Union is calling on New Zealand Post to stop recording audio on the cameras it installs in new postal vehicles. 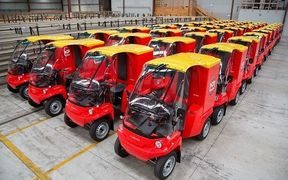 A fleet of four-wheel electric Norwegian made Paxsters are being rolled out throughout the country. Photo: supplied

The new electric postal vehicles have a forward-facing camera on the dashboard for security, which tracks the postie's GPS and automatically records both video and audio any time the vehicles is turned on.

The union agrees the cameras should be used for safety purposes but argues that audio is a step too far.

It said it was a breach of privacy for both the posties and whoever they were speaking with.

It said recordings were wiped after two days and team leaders must seek permission from management before they could access any footage.

New Zealand Post has refused the union's request to stop all audio recordings until any potential privacy issues can be figured out with the Privacy Commission.