Flooding in new Otago housing developments is worrying and the council will look at all areas zoned for subdivision, Dunedin's mayor says.

An aerial photo shows flooding at a new subdivision near Outram after the heavy rain over the weekend. Photo: Otago Regional Council

The weekend deluge, which in some areas dumped more rain in a day than the average for the entire month, prompted evacuations in towns and cities across the southeast of the South Island.

The state of emergency declared for Otago was lifted today. Dunedin Civil Defence has invoked a 28-day transition period, which gives the city council extra powers to carry out emergency-related work.

About 220 households were evacuated across the Otago region over the weekend. Some families who were evacuated on Saturday from flooded properties near Dunedin face several more nights out of their homes.

In Outram, on the Taieri Plain, the water pooled around houses in the new Anzac Court subdivision. Resident Craig Miller estimated it reached 20cm up the side of his house.

"I flew over the area on Saturday with [Minister for Civil Defence Nathan] Guy, and it did worry me that an area that is flooded now should have only partially-built homes on."

The immediate priority was the clean-up, but the council would "naturally be reviewing all areas that are currently zoned for subdivision" in light of the flooding.

A similar process had already started in South Dunedin. "In the South Dunedin area we've changed the rules about what level, what height you can build at. We're actually looking at those things in terms of climate change." 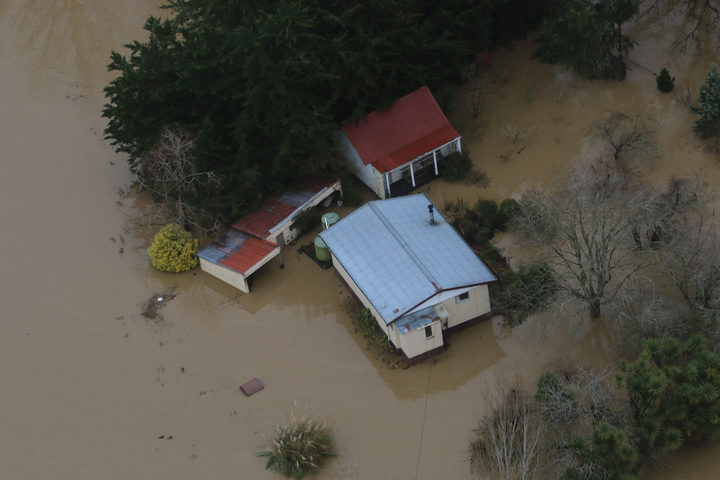 Slips were blocking side roads, cutting off access to some homes, and it would take some time for the regional council's flood protection system to pump the water off the Taieri Plain.

"A lot of them do understand it just takes time now for both the pumping stations and the gravity-fed feeds for that system to do its work and to drain that floodwater away ... in some cases, it could be a few days," she told Morning Report.

"There's definitely a fair number of houses that have flooded, as I say mostly in Henley and on the Taeri, but also a few dotted around Harwood, Ocean View, a few other places like that.

"We've got the odd house that sits effectively in a pudding bowl and so we're going to have to go in with pumps, which we were doing a lot yesterday and pumping water out of their own basin, across the road and into the harbour."

Despite the flooding, the scheme as a whole functioned exactly as intended, she said. "The odd little glitch, but everything went really well."

About five families had taken up the council's offer of accommodation, she said.

In all, about 100 properties around Outram were evacuated in the early hours of Saturday.

See the scale of the damage with this interactive public information map of the emergency areas, including aerial photos of Outram and Henley:

On Orme Street, John Gallaher had used carpets and sacks to try to stop the water flooding the lower level of his house on Saturday night.

"We had about three hours of continuous bucketing water up onto the road - to drain it through the drains up there - but then at midnight we couldn't keep up with it so it just flooded the house.

"It started flooding from midnight though 'til they called for evacuations at three o'clock in the morning ... We given up at that stage anyway."

In the Taieri Plain's biggest flood on record, in 1980, about 1400 people were forced to leave their homes. As a result of that flood, millions of dollars were spent creating stopbanks and spillways to prevent damage to residential properties.

This time, the Taieri River was deliberately diverted onto dairy farms.

Outram resident Eric Harris, whose house is about 100 metres from the riverbank, said the flood protection worked. The spillway on the far side of the river had been designed to give out in a major flood, and that is what it did, he said.

"It's probably saved Outram a bit of heartache and headaches."

But the works did not save the township of Henley, towards the bottom of the plain.

Mr Harris said when he drove past, houses there had water up to their windowsills and he estimated it would be weeks before it was drained away.

Mr Cull did not anticipate any more people would have to be evacuated, but said the floodwater on the plain moved unpredictably as it drained away, and confirmed it would be some days before evacuees, particularly in Henley, would get back to their homes.

"The Taieri Plain is a very dynamic environment and even though the river's dropping, the water that has already ponded is moving around as it drains so that's causing a few problems."

Deliberately-created ponding areas were designed to keep water from built-up areas, but there were a number of streams and rivers draining into the area, and as it drained the water would move about.

"There were houses yesterday ... that hadn't been affected by the initial deluge that were starting to be threatened by the water that was draining away."

About 40 roads in the region remained impassable or only partly passable, he said.