About 4500 households are still without power tonight after a powerful storm battered the lower and central North Island throughout the day, earlier 10,000 people were without power.

The storm has forced evacuations and virtually cut off the central plateau from the south. 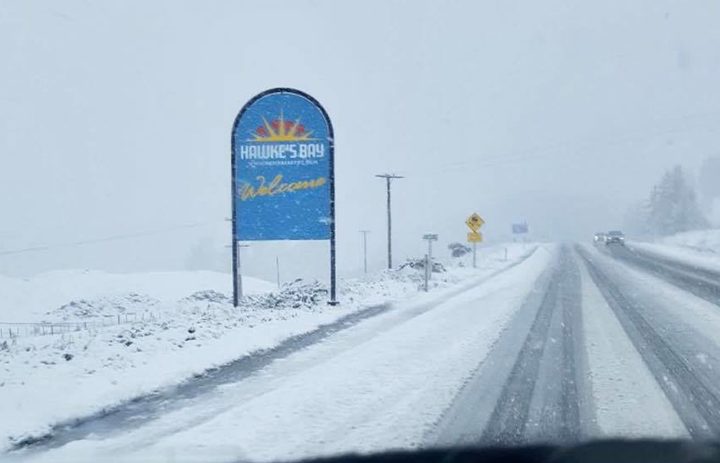 Powerco's operations manager, Phil Marsh, said about 4500 households were still without power across the lower North Island, including in south Taranaki, Whanganui and Taihape.

He said about 25 crews would work throughout the night on any safety hazards.

"We've got around about 120 staff in the field and we are restoring supply. Unfortunately we're still in the middle of the storm really.

"We're experiencing new faults. As we repair sections of the lines new faults are occurring so we've probably increased slightly on this morning's position."

Mr Marsh said commuters must be careful to avoid downed lines as they could be hard to see when a tree has fallen.

"If you see a tree down, look for lines. They are often easily missed. These are black wires probably sparking like they do in the movies but they can still be live so avoid the lines." 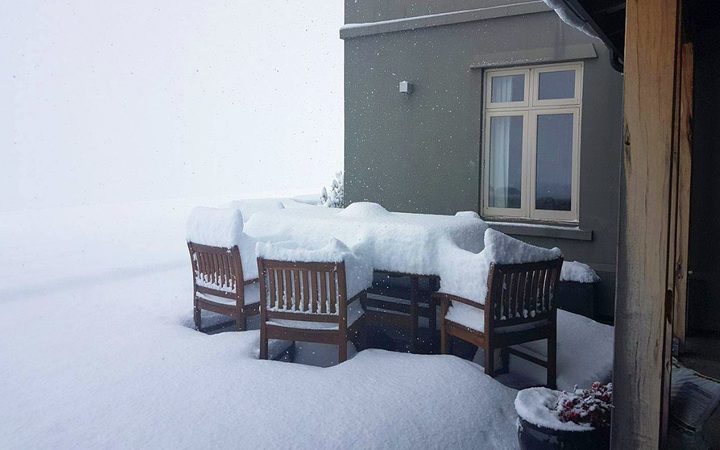 Civil Defence in the Hutt Valley is monitoring the Wainuiomata River and Waiwhetu Stream very closely, and said there was the potential for evacuations.

The Lower Hutt Emergency Management Office has been activated as a precautionary measure as heavy rain is forecast to continue.

Extra staff have been brought in tonight to monitor the situation in the Hutt just in case the weather worsens and the rivers rise.

The city council's Selena Simcox said crews were out on the streets in Wainuiomata and Waiwhetu and the Wainuiomata River was rising.

She said people were not being asked to evacuate right now, but if the river continued to rise they may be asked to leave their home.

Ms Simcox said if it did come to the point where people had to leave their homes the Wainuiomata Community Hub on Queen Street is open. The emergency centre said Wood Street and Coast Road in Wainuiomata and Hinemoa Street, Hayward Terrace and Riverside Drive in Waiwhetu are the most vulnerable.

Heavy rain in Wairarapa has led to flooding in Masterton where a handful of residents have been evacuated.

Snow is even falling as far north as Rotorua as the storm makes its way up the island.

A handful of residents in Masterton have been evacuated from their homes after stormwater drains in the area could not cope with the deluge hitting the Wairarapa.

Masterton Civil Defence said there was widespread surface flooding in the region. It said more rain was expected, but the major rivers in the valley were unlikely to breach their banks.

The wild weather has seen southerly gales peak at 167 km/h in Wellington, and a 10m wave was recorded in Cook Strait. Further south, snowy conditions are expected to ease by this weekend.

A rescue operation was launched this morning after vehicles became stuck on SH5 between Napier and Taupō.

Civil Defence spokesperson Ian Macdonald said everybody who wanted to leave their vehicles had been evacuated and been brought back towards Napier.

Some truck drivers have decided to stay with their vehicles, which was not unusual, he said.

Keep up with RNZ's live updates here and check our summary of what you need to know.

Some of the stuck truck drivers have hunkered down at the Rangitaiki Tavern.

One of the tavern's owners, Marion Klaus, said there were nine truck drivers taking shelter at the moment, and they would not be moving any time soon.

"The sun was trying to come out, but it's still snowing, there's probably three or four inches of snow. We're 40ks from Taupō, but further down it's quite bad." 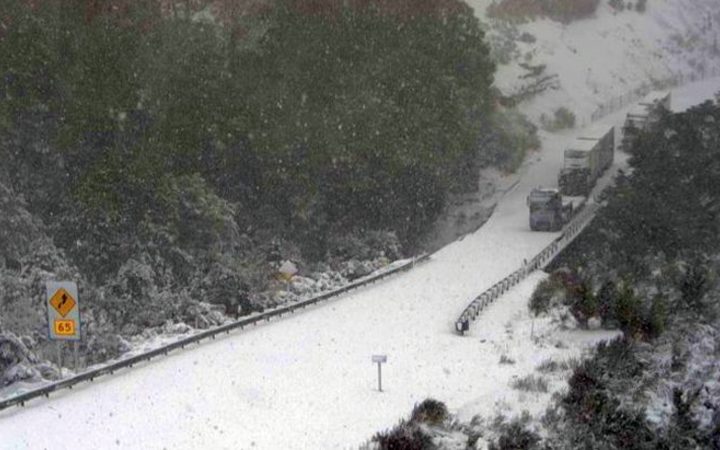 Roads across the North Island, including the Desert Road, have been closed by snow. Photo: NZTA

Ms Klaus said they were pretty self sufficient and the power was on, but they did have a back-up generator.

Mr Macdonald said it was vital motorists did not drive past road closures as there could be hidden drop-outs and downed power lines, and insurance was void past a roadblock.

He urged all road users to take extra care on the roads due to the winter conditions and avoid unnecessary travel.

MetService forecaster Tom Adams said this morning that the snow might be the "poster child" of any winter storm, but it was the wind and rain making things most hazardous earlier in the day.

Wind gusts of 167 km/h were recorded at Baring Head and 151 km/h in the Wellington suburbs.

Mr Adams told Morning Report one wave over 10m had been recorded off Baring Head.

That would be at the top end of recorded wave heights; swells about 7m would be typical.

"I don't think there's any boats of any description out there today."

Wellington City Council said its call centre had been kept busy with scores of calls about trees and branches down on roads, slips and other storm-related damage, including reports of roofing iron coming loose on a number of buildings.

The incidents were being reported from all parts of the city.

Roads around the south coast were open, but motorists were warned to take care, in case waves pushed debris ashore.

Train services on all lines have also been delayed by the weather.

Regional flights in and out of Wellington [ have been disrupted as strong winds hit the airport. 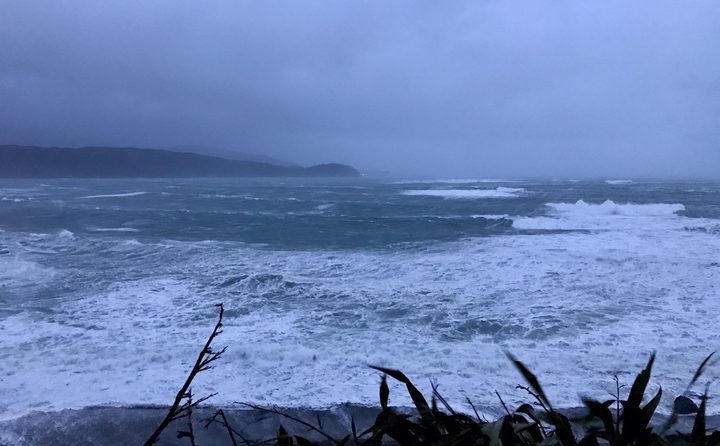 Too much snow on the skifield

Mt Ruapehu's ski fields are closed because of blizzard conditions, with at least 50cm of snow expected there.

Chief executive Ross Copland said they were excited by the big snow and were trying to keep up with snow grooming in difficult conditions so they were ready to open at the weekend.

But he said heavy snow drifts had brought an avalanche risk and staff were carrying out explosions to lessen the risk.

Heavy snow is also falling on Mount Lyford, ahead of the South Island ski resort's opening on Saturday.

Ski field manager Hamish Simpson said it had been one of the best snow falls in recent years.

Mr Simpson said there was still a lot of work left to do when the weather cleared tomorrow, including clearing roads and checking the ski slopes.

But he said the final preparations were on track.

Southern snow eases for the weekend

Further south, MetService said the South Island had seen the biggest snow dump of the year this week.

Snow and ice has closed several major roads across the island this week, with Kaikōura cut off last night. Most roads have now reopened, although Arthur's Pass remains shut.

Mr Adams said this afternoon most heavy snow warnings had been lifted for the island, and the weather should be better for the weekend.

"It's definitely the best snow dump we've had so far this winter. By the time we get into Friday, things do start easing for not a bad weekend, really. But yeah, if you want to get out there and enjoy the snow now, head south of Christchurch. Things are improving, machines will be able to get in there and clear the roads, so it's an improving trend." 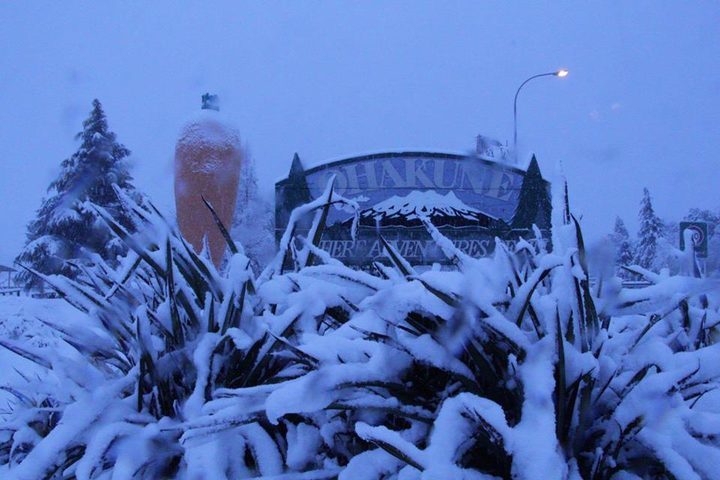 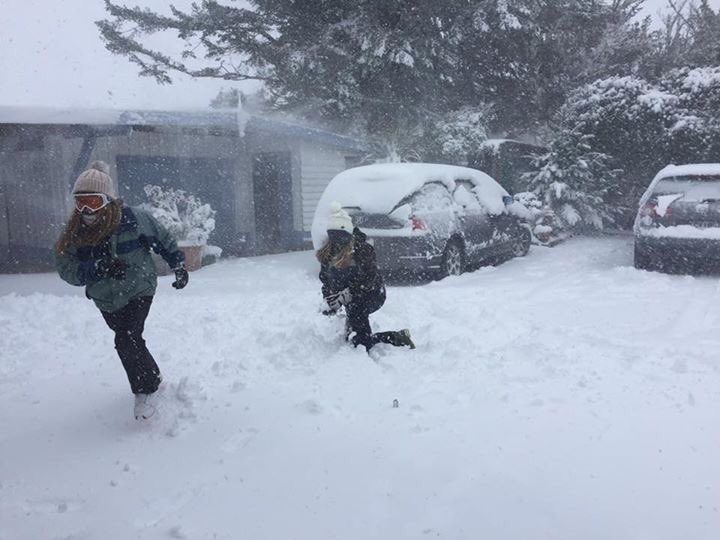 Guests play in the snow outside a lodge near the Tongariro Crossing. Photo: Twitter / @LouisvanWyk 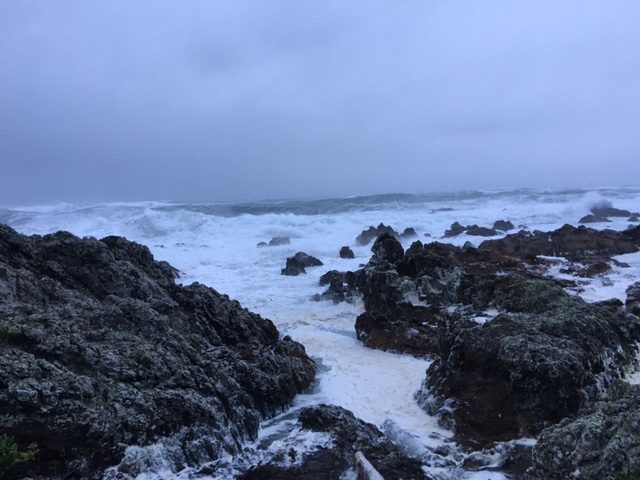 The police maritime unit took the opportunity to do rough weather training in Wellington Harbour on Wednesday. Photo: NZ Police 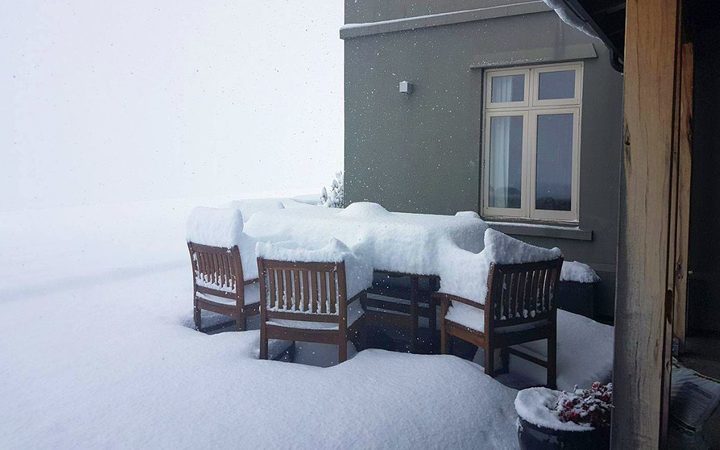 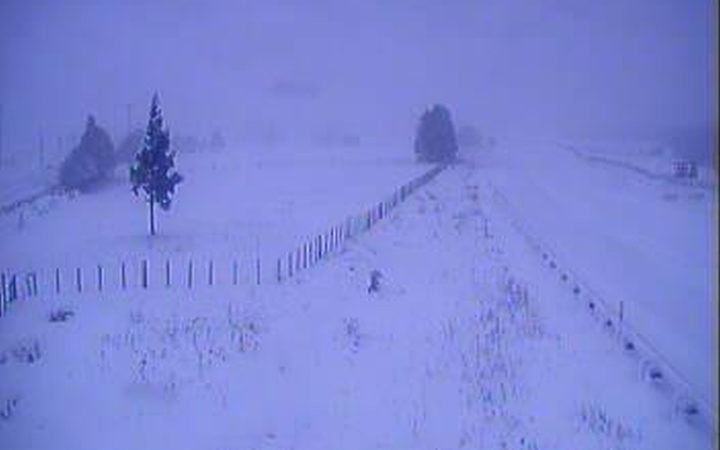 The start of the Desert Road at Waiouru was barely visible on Thursday. Photo: NZTA 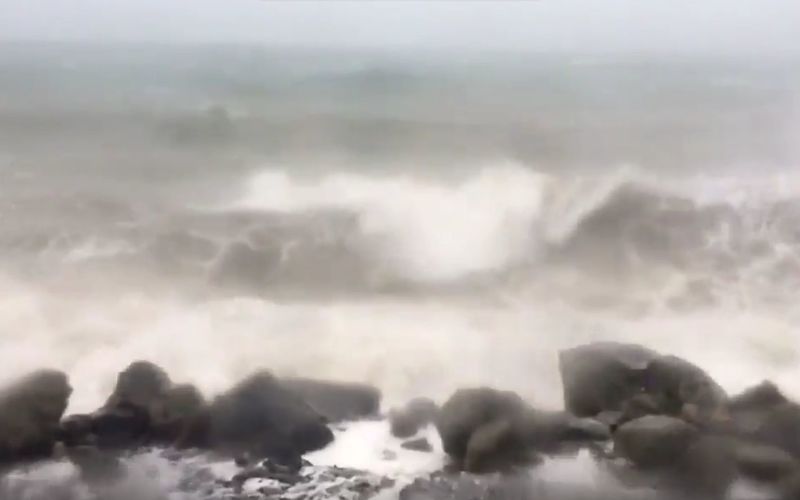 The view from the train window on the Hutt Valley Line into Wellington. Photo: @kelvinking_nz 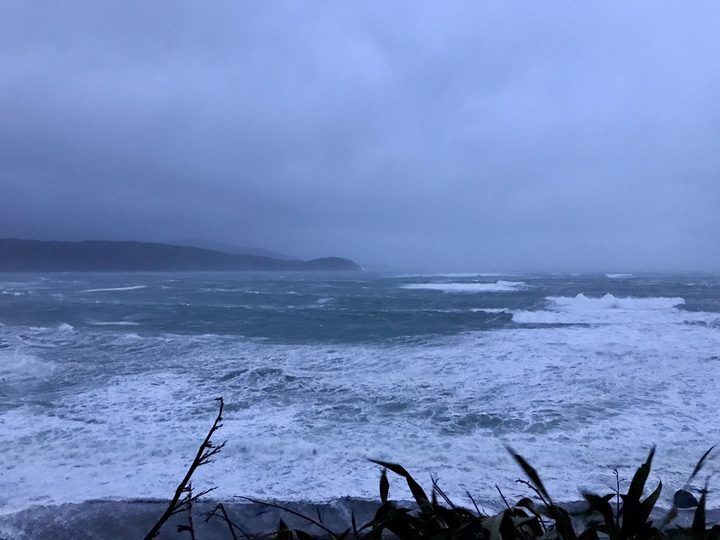 Waves at another stretch of Wellington's south coast on Thursday. Photo: Twitter / @FiNZ63 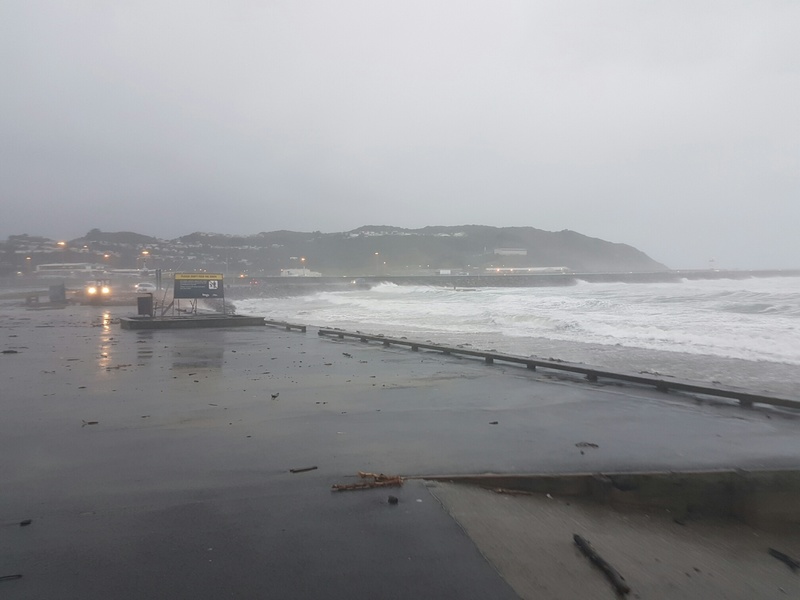 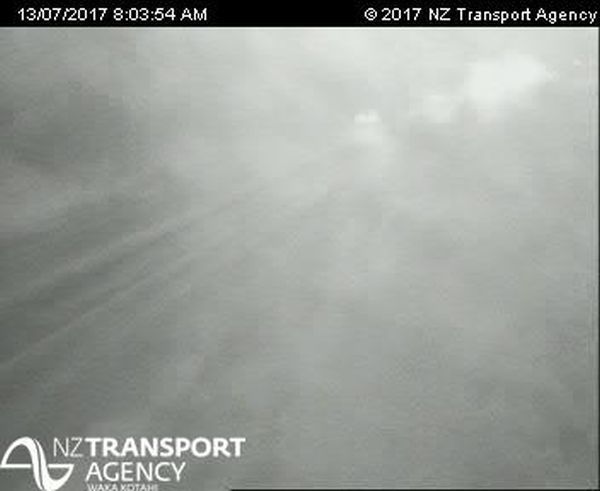 Grey-out conditions on SH1, the coast road, near Paekakariki on Thursday. Photo: NZTA 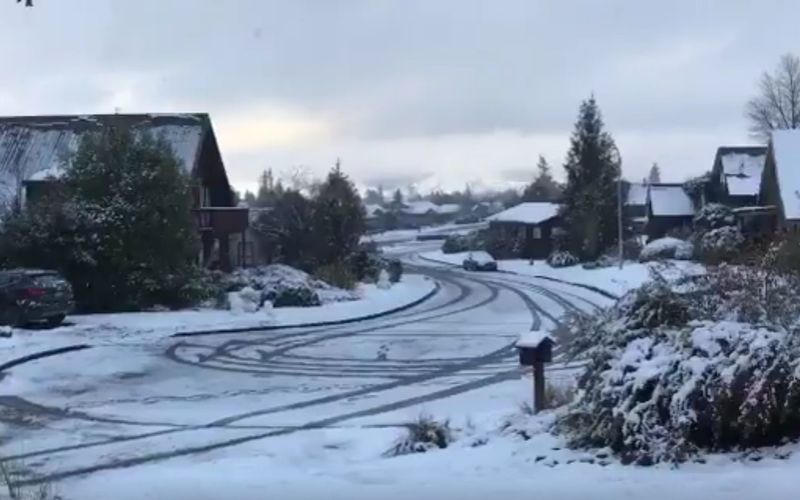 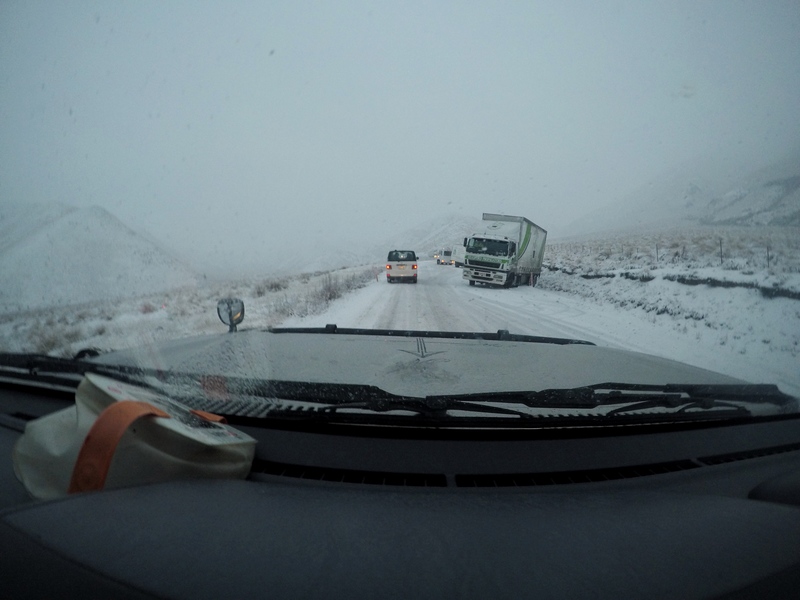 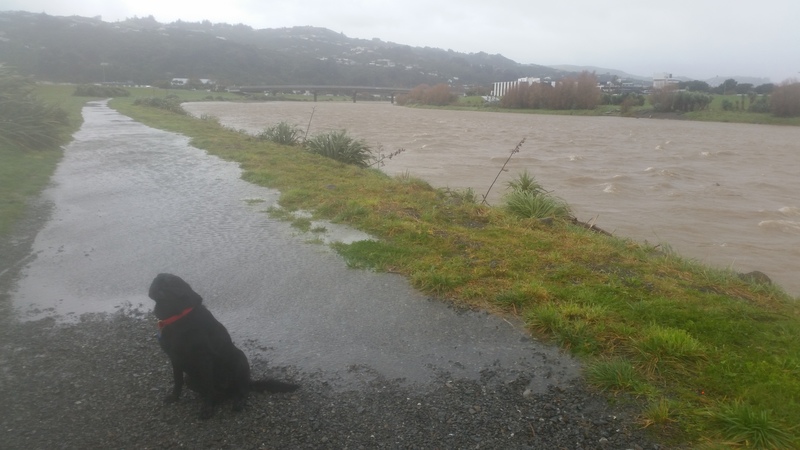 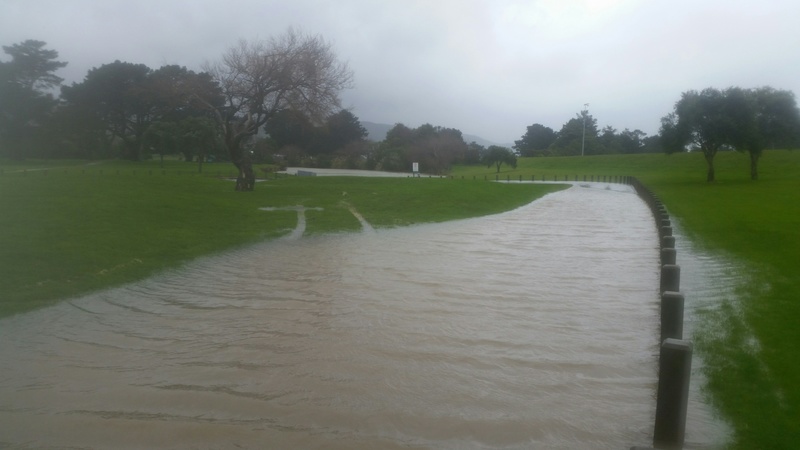 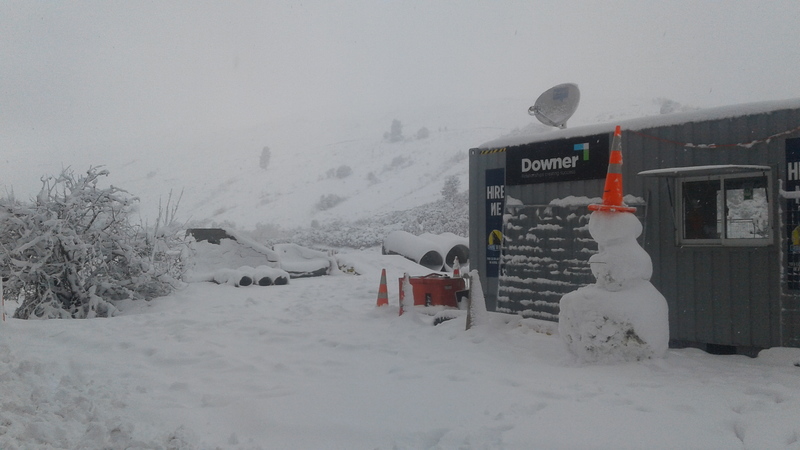 The Waiau-Mt Lyford inland road in Canterbury was closed by snow. Photo: NZTA 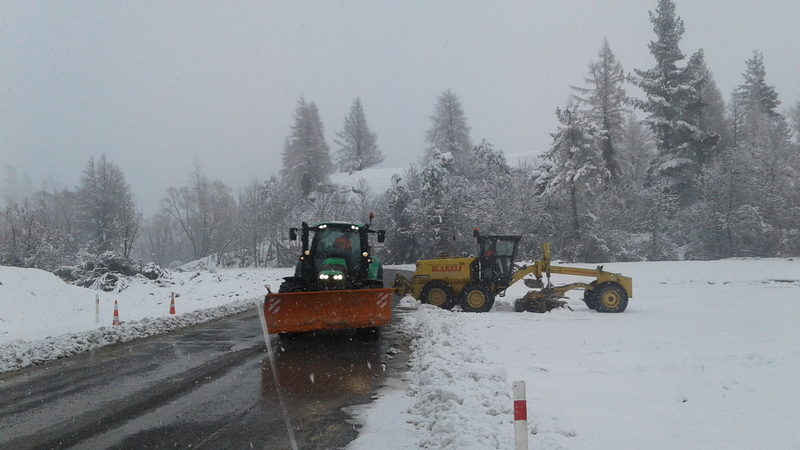 Work under way to clear the inland road on Thursday. Photo: NZTA 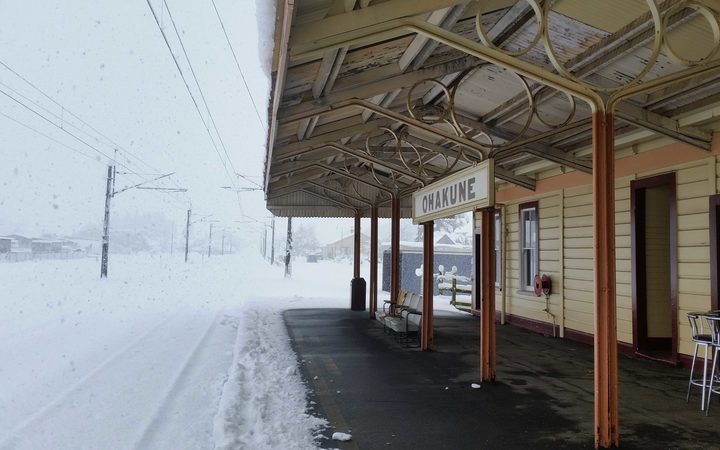 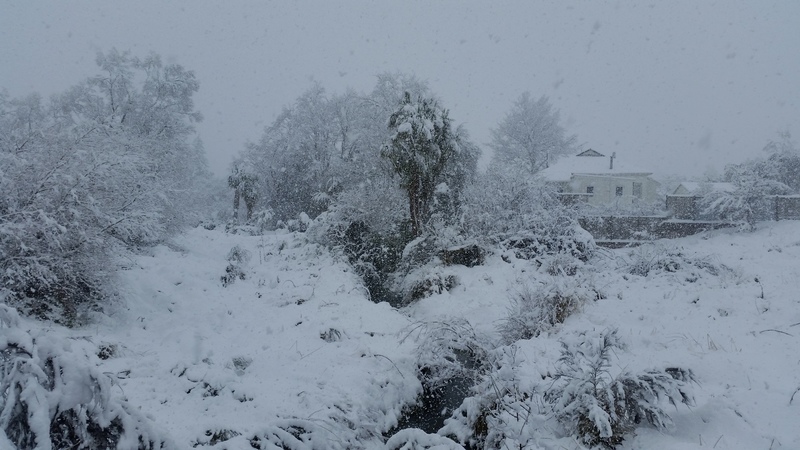 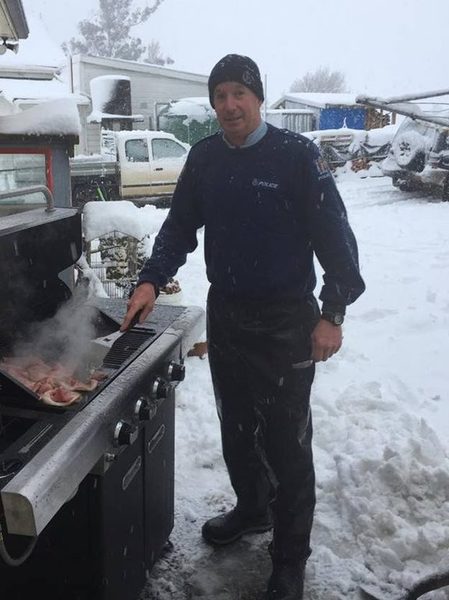 Police in the Manawatu town of Kimbolton have been cooking breakfast for snowed-in residents. Photo: Facebook / Manawatu District Council 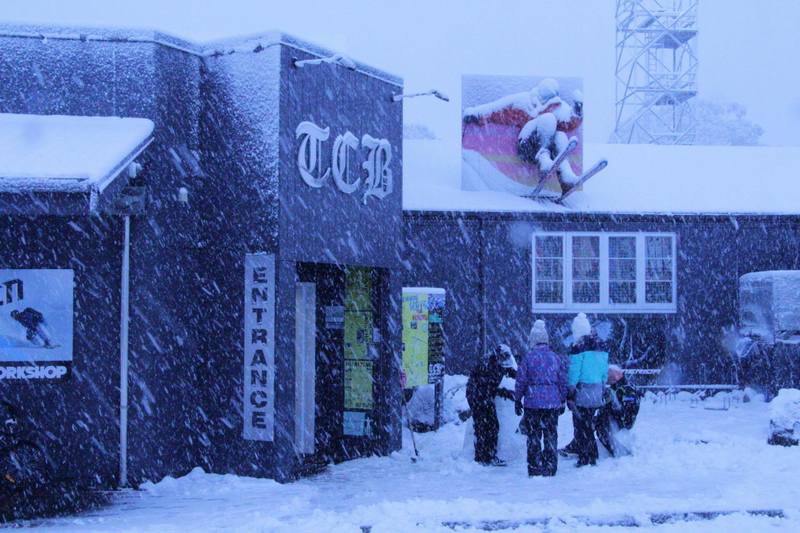 Another shot of snow at Ohakune on Thurday. Photo: Facebook / TCB Ohakune 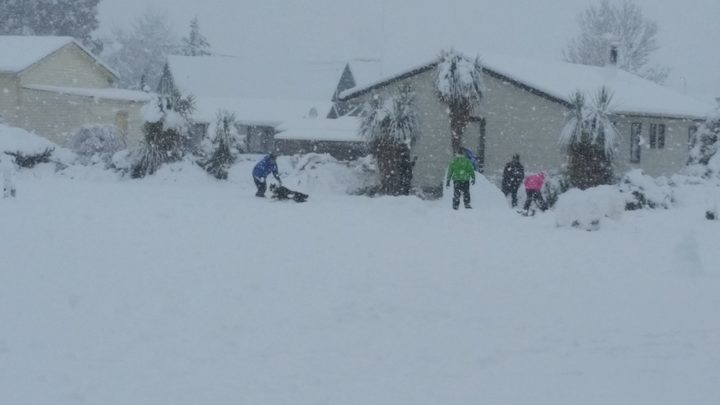