Wheelchair users in Christchurch say they are still struggling with access issues the city, six years on from the 2011 earthquakes. 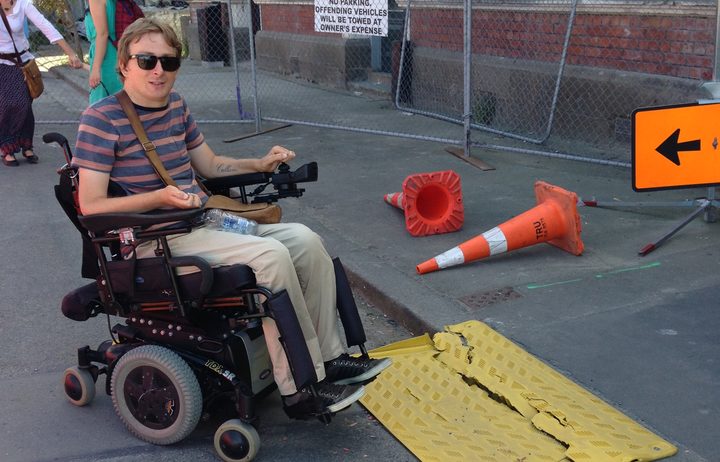 A photo taken earlier this year shows Canterbury University's Johnny Bourke in the city centre, next to a broken access ramp. Photo: Supplied

Johnny Bourke, a Canterbury University PHD student and a wheelchair user himself, has just completed research looking at the long-term barriers that people in wheelchairs are facing several years after the Canterbury earthquakes. 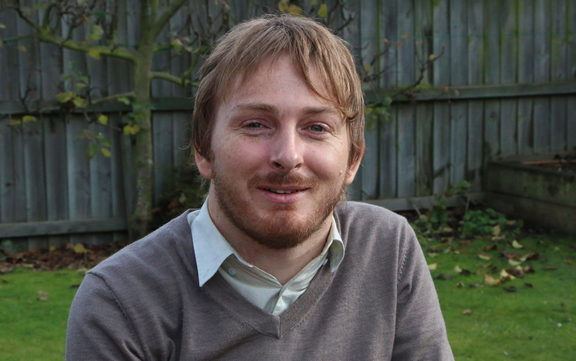 Mr Bourke surveyed more than 60 wheelchair users over 2015 and 2016 and found that getting around was more difficult than before the earthquakes.

He said barriers for wheelchair users included inaccessible housing, shops and businesses - but the most frequently mentioned were damage and physical disruption to footpaths and roads.

"For example going along a footpath and then getting to the end and there is a big [road works] fence and then there is no drop-down ramp [to cross the road]," he said.

Mr Bourke's full body of research was only completed last week, but parts of it have already been published in the International Journal of Disaster Risk Reduction.

He said, from his personal experience, most of the barriers highlighted in the research were still present in the city in 2017, and Christchurch was expected to still be rebuilding for years to come.

Robin Tinga has been using a manual wheelchair since 1994, when he injured his spinal cord.

He agreed access in Christchurch was still worse than it was before the 2011 earthquake.

"It can be exhausting, it can be frustrating to the point that you turn around and just [say] forget about it, it's too hard... can't be bothered," he said.

Mr Tinga said getting around was generally easier for him than someone who used an electric wheelchair, as he could pull himself over curbs and usually make his way along damaged footpaths.

"I've heard a lot about people who just don't bother to come out, because they just don't believe it's accessible."

Mr Bourke said international research had found social connectedness was important for people's well-being after a disaster - but some wheelchair users felt isolated.

Amy Hartnell is the project co-ordinator for the Earthquake Disability Leadership Group, which has been working to improve access in post-quake Christchurch.

She said once the rebuild was finished, access in the city was expected to be better than it was pre-quake, but it was not good enough that people were feeling isolated in the interim.

"A lot of these works are 'temporary', but what is temporary six years on? So it does make it [access] really, really hard, I think there are improvements that can be made around temporary structures or where a development is occurring and the footpath needs to be closed... you know, there is a lot more work and a process that can happen to make those adjustments easier for people."

The government agency in charge of the city's anchor projects, Ōtākaro Limited, said accessibility around construction sites was reviewed during routine checks and all completed projects would be appropriately accessible.

Mr Haymes said damage to the city streets and footpaths following the earthquakes had affected all users getting around the city, whether they were able-bodied or had disabilities.

"The effects of this were without a doubt worse for people with disabilities and it was always going to take some time for the situation to improve," he said.

"I'm confident that we're making good progress now as a city, as efforts by both the public and private sector to rebuild the city are showing.

"The community can expect that the situation will continue to improve as each project comes to a conclusion."