Music has rocked Christchurch's town hall for the first time since the devastating February 2011 quake. 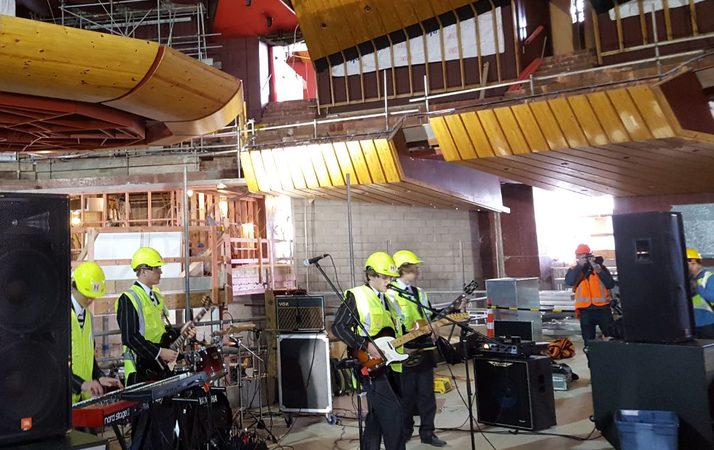 The Town Hall, one of the city's most iconic performance venues, had been under repair for two years after sustaining significant damage.

Workers said the restoration had been a long slog but the end was now in sight.

Christ's College band, Run 77, reminded construction workers, city councillors and the mayor of the building's history as the premiere performance venue in the city, and performed today in front of the main auditorium's stage.

The man responsible for the restoration project, Patrick Cantillon from the Christchurch City Council, said it had been a long process to get to this point.

"It's two years of work, four and a half years of my life, it's a massive job", he said.

The main auditorium was slowly taking shape, its concrete floor poured and ceiling constructed. Next door, the walls were going up in the 700-seat James Hay theatre.

Mr Cantillon said there had been a few surprises along the way, including the discovery that the concourse's roof was made up of old, wet pine.

But he said it could have been much worse.

"There's no theatre ghost found as of yet, but we're over the worst of it and we're heading towards completing the works", he said.

The project, which cost ratepayers $133.1 million, was expected to be completed by the middle of next year.

The building was first opened in 1972, with people lining up for a glimpse inside.

Christchurch mayor Lianne Dalziel said she hoped for a similar celebration next year.

"I was a teenager when it opened, I remember the open day when it arrived, and I can't wait for an open day next year", she said.

The council's events company, Vbase, would be managing the venue, and its general manager, Darren Burden, said it provided a performance space that was currently missing in the city.

"The Town Hall is a really critical venue... there is a huge number of events which are quite challenging in terms of where they have to go at the moment", he said.

Mr Burden said they would soon be looking for interest from groups who wanted to use the venue.

The Town Hall is expected to be ready for its second grand opening next year.