A Queenstown newspaper naming and shaming drink drivers on its front page could do more harm than good, some local service providers say. 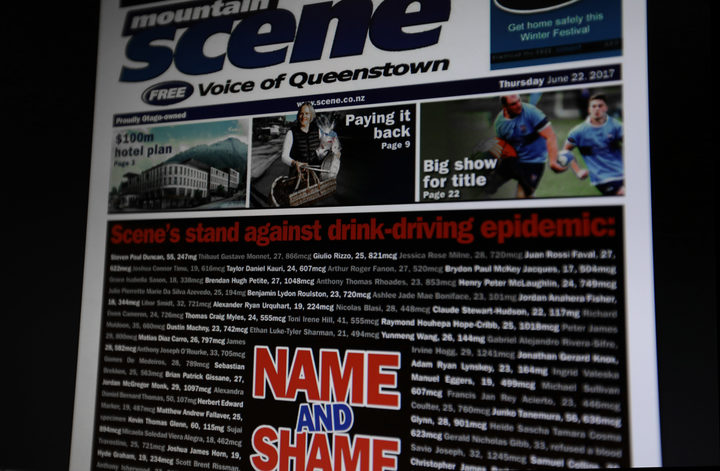 Yesterday's Mountain Scene lists 100 people who have been convicted of drink driving since January.

The paper has said it would publish the names of anyone convicted of the crime at the Queenstown District Court on the front page for the rest of the year - to deter others from making the same mistake.

But Jane Guy, the regional co-ordinator for Jigsaw - a family violence agency in Queenstown - said that would not work.

"We all want this to stop, we all don't want people to die because of this ... but 'shame' research has shown that it doesn't stop people from doing it.

"It usually either drives people underground to do it secretly or it stops people standing up and saying I need support."

Ms Guy said the campaign was creating a division in the community.

"I just think it's not helpful."

She said the community should be working together to find a solution, which could include looking at ways to help people get home safely or bars taking up a bigger support role.

Counsellor Sarah Deeling said that naming and shaming those convicted of drink driving would not bring about change in those individual people.

"If anything they will probably feel worse about themselves and because of that, will feel like having another drink."

The paper's editor, David Williams, said the names of people convicted at the Queenstown District Court for drink driving were already being published in the newspaper before the campaign started.

He said while those named may feel ashamed, he wanted to make others think twice before they got behind the wheel after too many drinks.

"I'm not a researcher, but given the conversations I had yesterday ... I'm hopeful the [campaign] will work, that people will think twice.

"It's a balanced campaign, of course people need support and they need care if they have got a problem and we will be reporting on those aspects of the campaign too."

Mr Williams said it had not had any feedback from social service providers since yesterday's paper was published.