Auckland building consultant Louise Swann is calling on the government to suspend certification of aluminium composite panels in the wake of the fatal tower fire in London. 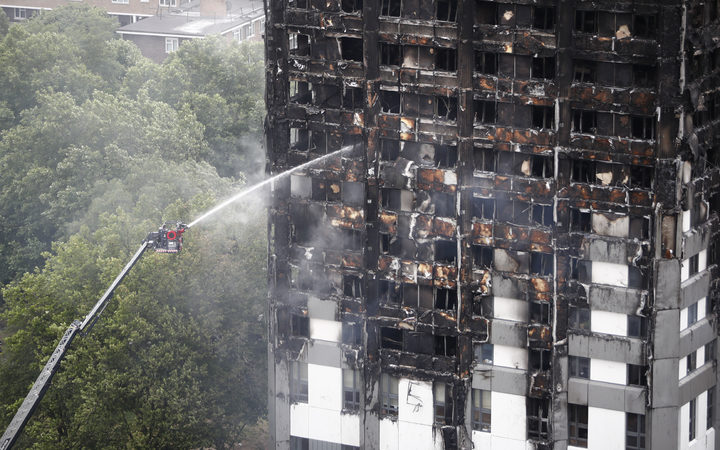 There has been speculation that a type of ACP enabled the fire in Grenfell Tower to spread quickly. Photo: AFP

At least 17 people died and dozens more were injured when the 24-storey Grenfell Tower building became engulfed in flames on Wednesday morning.

The cause of the fire is not known but there has been speculation that a type of aluminium composite panel (ACP), with a combustible plastic core, enabled the fire to quickly engulf the building.

There have been at least 10 other major multi-storey cladding fires worldwide since 2007 with this type of cladding.

Another type of panel - one that has a mineral core, which is much more fire resistant - is used widely in New Zealand.

Ms Swann said she was not questioning the product itself.

But she said a temporary halt in certification was needed to review information provided on how to install the product in order to resist both water and the spread of fire.

Certificates are one common way of showing a product complies with the Building Code, and if it is issued by an accredited certifier a local council must accept it.

"That certificate is so critical and that's my concern," Ms Swann said.

"So let's give all that information up front, really clearly, so that then people can make design decisions and install decisions with full knowledge."

She said the Ministry of Business, Innovation and Employment (MBIE) needed to show leadership and direction, as most in the industry were desperate to get it right.

MBIE said it had asked the certification accreditation body JAS-ANZ to look into the issue urgently, along with the certifier itself, Certmark International, which is based in Australia.

Certmark said in a statement that aluminium composite panels met very stringent criteria and complied with the Building Code.

"Suspensions are not undertaken lightly and require evidence of non-conformity, which currently there is none."

Ms Swann said she put a lot of time into providing advice to the ministry about the issue.

The ministry said it would soon be putting out a report on whether the information that industry was getting about the aluminium panels and other cladding products was up to scratch, and that would go to other regulators too like certification accreditation body JAS-ANZ.

Earlier this year New Zealand tightened up the rules for cladding used on high-rise buildings.

The ministry briefed councils about aluminium composite panels early last year, after an inquiry into the Melbourne Docklands high-rise fire of 2014.

It said councils had not told it about any instances of inappropriate use of the panels.

Auckland Council, the council with the country's greatest number of high-rise buildings, said it had not detected any either.

It said in a statement it had already pushed the ministry to raise protection levels around the vertical spread of fire - which it did in March - and was poised to do more.

"We are already engaging in data we have sourced from colleagues in the UK and from discussions with MBIE. This will inform how we respond following the tragic events in London," said building control manager Ian McCormick.