Heavy rain and gale-force winds are expected in the North Island in the next 48 hours, with local authorities warning people to be prepared. 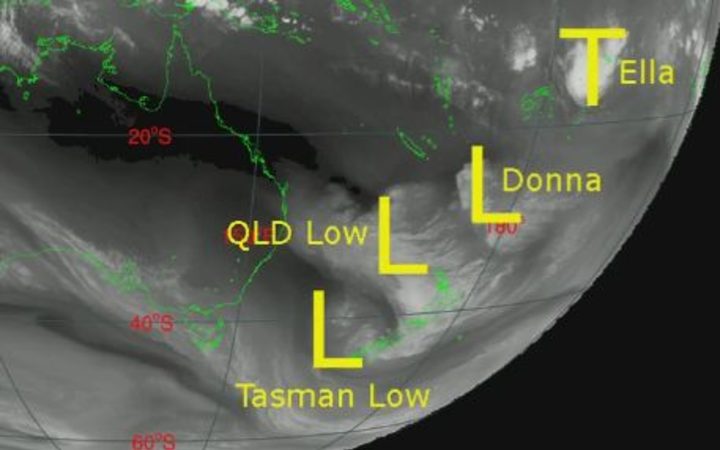 A combo of lows: A Tasman low, a Queensland low, the remnants of Donna and moisture from Cyclone Ella will cause a May deluge in New Zealand, NIWA says. Photo: Twitter / @NiwaWeather

MetSerice said a slow-moving front would bring heavy rain to much of the central and northern North Island.

The remnants of Cyclone Donna, which caused damage in Vanuatu and New Caledonia, was also expected to pass just east of Northland and Auckland later on Friday.

Up to 250mm of rain was expected in the ranges of Bay of Plenty and Gisborne between 9pm Thursday and 6pm Friday. Up to 140mm was expected elsewhere in those regions.

MetService warned this was enough to cause rapid river rises, surface flooding and landslips.

Bay of Plenty Civil Defence and Gisborne Civil Defence asked residents to prepare for the bad weather and keep up to date with the latest information.

Edgecumbe, near Whakatāne, is still recovering from heavy rain last month, which caused the Rangitāiki River to breach its banks and swamp the town.

Whakatāne District Council said it had been advised the amount of rain forecast would not threaten the stopbank.

"The main area of concern is that the cleaning-up process will be slowed down with the additional rain, as low-lying areas are still saturated," the council said.

He said they were checking pump stations were working and asking residents to clear drains of autumn leaves.

He earlier said he hoped a MetService prediction of 160mm of rain did not happen.

"We've had our share, and I shouldn't say but we don't want it in the eastern Bay of Plenty, we'd rather have it go somewhere else."

MetService forecaster Ravi Kandula said earlier a warm northerly flow from the Tasman had brought heavy rain to western parts of the country and was moving east.

Tomorrow, Donna was expected to bring southerly winds that would send that rain back across the country.

As well as Bay of Plenty and Gisborne, heavy rain warnings were in place tonight for Taranaki, Waitomo to Taupō, Tongariro and the headwaters of the Whanganui River, and the Coromandel.

Woah #Nelson 45mm of rain in the last 12hrs (a torrential downpour 49mm in 1hr in Collingwood!) Rain is expected to ease from midday ^AC pic.twitter.com/MNE01Yw7hi

Tomorrow, many of the same areas were predicted to be hit again, with Wairarapa, Hawke's Bay, inland Whanganui and Manawatu likely to be affected.

The wet weather was expected to last until Saturday morning in some areas.