The National Party's use of a song in its 2014 election campaign said to be similar to one by the US rapper Eminem did not breach copyright, a court has been told. 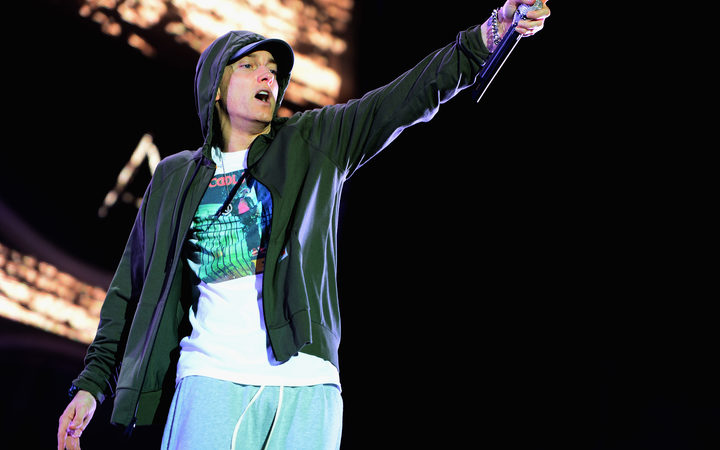 Eminem's music publisher is suing the National Party and others for breaching copyright during the 2014 election campaign. Photo: AFP

Eminem's music publisher, Eight Mile Style, is suing the party in the High Court in Wellington claiming the campaign music was very similar to the rapper's song 'Lose Yourself'.

The National Party's lawyer, Greg Arthur, made his opening address on Wednesday afternoon, saying the track 'Eminem Esque' used in the campaign was provided by a music production library.

He said those libraries provide tracks known as 'sound alikes', which were designed to be similar to well-known music without infringing copyright.

Mr Arthur said for copyright to be infringed there has to be a reproduction of a substantial part of the original and it was not enough for listeners to hear similarities between 'Lose Yourself' and 'Eminem Esque'.

He pointed out that witnesses for Eight Mile Style described the ad track as "weak, bland, or light".

"And I say that's because it doesn't replicate those parts of 'Lose Yourself' that gave it its originality.

"If you take those bits away you aren't reproducing a substantial part and there is no copyright infringement."

Mr Arthur said those involved in planning National's election campaign became aware the music on the ad might sound like Eminem and they did not want to use him because they had been told the singer was associated with hate speech.

He said the party was also concerned about the possibility of breaching copyright in using the "Eminem Esque" track, but was assured by various sources that it had been licensed multiple times for use in advertising without issue.

Mr Arthur read from emails sent to the party by music licencers and others addressing its concerns.

"All you can say is [the production company] provides it in good faith with [an] agreement [the music production library] had with them.

"That agreement says it doesn't infringe on copyright and is available for use in production purposes."

Mr Arthur said the party was told if any issues arose the responsibility lay 100 percent with the music publisher and it had nothing to worry about.

She said focus groups showed a preference for use of the "Eminem Esque" track rather than a classical music piece.

Ms de Joux said the party had previously received complaints about music used in advertising campaigns and wanted to avoid that in 2014.

She said exhaustive inquiries were made with agencies such as APRA and other music licensing groups.

"All those inquiries revealed clear assurances that because the ["Eminem Esque"] track was library production music [we] could use it without risk."

The case is expected to finish early next week.