A volunteer left traumatised after helping rescue people from a collapsed building following the 2011 Christchurch earthquake has won a landmark case. 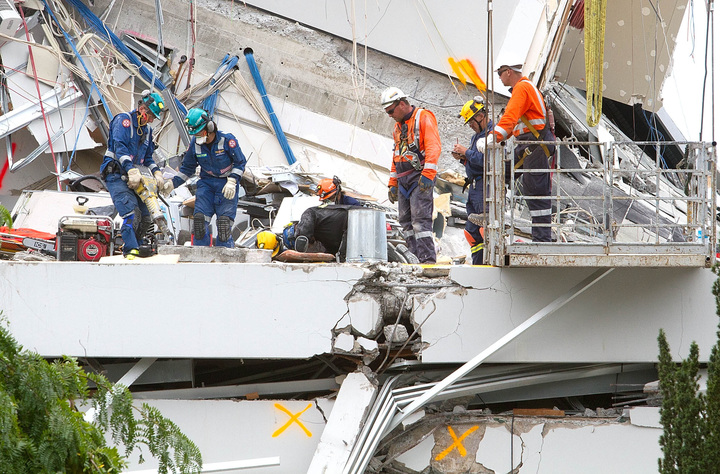 The PGC building in Christchurch collapsed in the 6.3 magnitude earthquake on 22 February 2011 killing 18 people. Photo: AFP

Despite being diagnosed with post-traumatic stress disorder (PTSD), the Accident Compensation Corporation refused to cover Bill Toomey's treatment, stating his injuries were not the result of a work-related accident.

But a judge in the Auckland District Court has disagreed and ordered ACC to cover Mr Toomey's claims.

Following the earthquake, Mr Toomey, who worked as a builder, drove his van into the city centre to see how he could help.

When he told a fireman he was a builder, he and two other volunteers were taken to the PGC Building, where he helped drill through a concrete floor.

The scene that confronted him was horrific.

"It was just like a movie, it was 9/11 inside the building, with the lights hanging down, the papers, there was money there, handbags, shoes and then you hear voices, screaming, and that's the thing that bites you a bit," Mr Toomey said.

It was not until two years later, while he was on a family holiday, that Mr Toomey began experiencing the symptoms of post-traumatic stress disorder.

Initially he thought he was having a heart attack or a stroke, until tests confirmed otherwise.

"It's the nightmares, it's the sweats, it's the shakes, the tears, it's the smell of concrete dust that triggers it - it still does, but I'm over a lot of the pain with that.

"Certain sirens, people screaming and every time you hear a big heavy truck, you think, 'Is that an earthquake or not?'"

His lawyer, Louise Newman, who works for John Miller Law, said the court did not agree with ACC's assessment.

"Even though he might have gone down there with an initial intent to volunteer, he's effectively been using his specialist skills and knowledge as part of his employment as a builder in order to assist the emergency professionals," Ms Newman said

"The court has said that there should not be a disincentive for someone like Mr Toomey not to cooperate with the Fire Service or the police when they're asking for help."

The law was out of date and often failed to recognise people's personal experiences and suffering, he said.

"I don't believe that [Mr Toomey] needs to have gone through the trial of being turned down for such a long time knowing the distress of PTSD and knowing that he's up against the legislation that is not permitting him to be accepted under a ACC claim.

"It was patently unfair that the rigidity of the legislation counted against him."

ACC said it was considering the judgement.

It has a month to lodge an appeal.