The central business districts in Wellington and Auckland were quieter than usual this morning as more people sought a longer break from work. 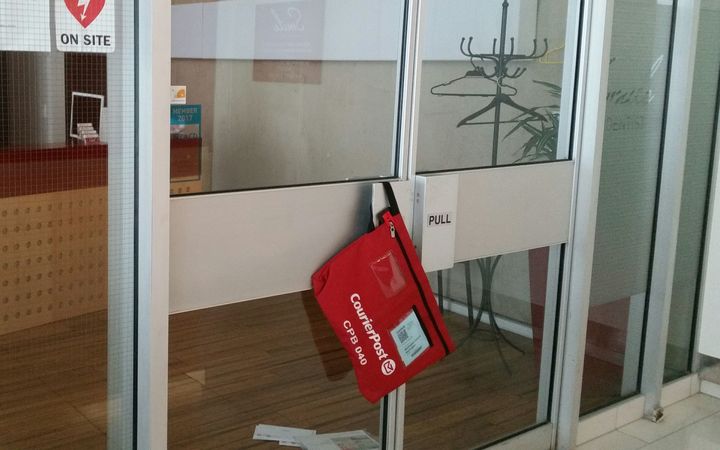 A closed office in Wellington that did not open for the day between the weekend and Anzac Day. Photo: RNZ / Edward O'Driscoll

The Anzac public holiday is tomorrow, and that has prompted people to take today off and enjoy a four-day weekend.

"Who wants to go to work on a Monday, have Tuesday off and then have three days left of work?" an Auckland Queen Street pizza manager said.

"You might as well just have a three-day work week."

He said foot traffic was down considerably.

Another manager at an Auckland curry store said many of his regular customers were business people and he had not seen any of them today.

Convenience stores and cafes on Lambton Quay in Wellington also said the foot traffic was noticeably quieter, and that the peak morning rush did not seem to happen.

"We noticed straight away this morning that it was more like a Saturday than a Monday," she said.

"It's something that people are going to do, isn't it? Because it's just too tempting."

Another woman, who did not want to be named, said she made the last-minute decision not to go to work this morning.

"It's just an extra long weekend," she said.

But employment expert Max Whitehead said people should be cautious if they have "pulled a sickie".

People should expect their bosses to be suspicious and ask questions about their extra day off, he said.

"The employer in accordance with the Holidays Act has the right to require a medical certificate from the employee. If they haven't already organised one, then they will have to get a retrospective one, which is just going to add fuel to the suspicion of employers," he said.

Mr Whitehead said employees should also know that the "eyes are everywhere" with social media.

"The boss may just well see you on the beach or wherever you are at the moment, and so you're better off just being upfront and honest."