Emergency housing providers are warning more homeless families will be sleeping in cars, parks and garages in Auckland this winter because of a desperate shortage of cheap accommodation.

They say the crisis is worse this year because emergency motel units are already full, and at least one marae which helped people last winter won't be reopening its doors.

Emergency providers are warning more families will be sleeping in cars this winter. One housing trust is getting up to a dozen enquiries every day. Photo: 123rf.com

Among the many homeless families who have already asked for help this year is a great grandmother caring for young children.

The manager of De Paul House on Auckland's North Shore Jan Rutledge said that was a new trend.

"The parents are completely out of the loop."

Homes were found for them but many were choosing to stay in crowded houses - sometimes with extreme overcrowding.

"There is no advantage to those families or individuals in reporting to MSD [Ministry of Social Development] because they then put their existing accommodation - friends and whānau - under pressure and at risk of losing their tenancies."

Across Auckland, in Manukau, the Salvation Army is turning away two or three families a day.

"We've got nowhere to send them, to refer them to to offer them any other form of housing so effectively they are just sent away," he said.

They had no idea where they ended up.

"That's part of the frustration - that we know these people are going to do it hard but there is nothing we can do to help them."

The issue of people being forced to sleep in their cars was a growing one, say social welfare groups. Photo: Supplied

People who were forced to sleep in cars should be given somewhere safe to park with showers and toilets, he said.

The government had asked the Salvation Army for ideas on tackling the crisis but the organisation was out of ideas for where to put emergency housing, he said.

"This sort of thing just doesn't happen in two or three months. It takes a lot longer to provide."

A Salvation Army officer, Nicki Dutton, helps people sleeping in cars with food and blankets but can't give them shelter.

The problem was getting worse but it was difficult to know the extent of it, Ms Dutton said.

"If there are families there, people don't want to be seen. They are concerned about what would happen with their kids if someone finds they're sleeping in their cars. So often you don't see the extent of the problem."

Providers said the government had responded to the crisis by giving them more money and building more houses.

But Monte Cecilia Housing Trust chief executive Bernie Smith said some would still be without a roof this winter.

"We are getting around 10 to 12 enquiries on a daily basis. If we don't have space which is more often than not we ring other providers and they in turn are ringing us. Often it is very cyclic in the sense the full sign is out in most agencies," he said. 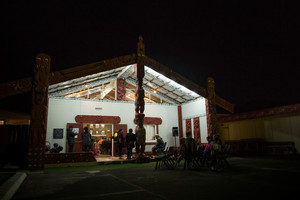 Te Puea Marae gave shelter to almost 200 people last winter but its chairman Hurimoana Dennis would not comment on whether it plans to reopen this year.

He said it was busy helping tourists with nowhere to stay.

Manurewa Marae chairman Rangi McLean said it would not be opening its doors again.

"There was certainly a strain put on the infrastructure and our workers at the Manurewa Marae and they have said to me they don't want to go through that again," he said.

Mr McLean said South Auckland groups were working together to tackle the problem.

The Ministry of Social Development said today it planned to buy a few motels to help provide shelter for homeless people this winter, but it could not guarantee that people would not be sleeping in cars, tents and garages.

Deputy chief executive of housing Scott Gallacher told Morning Report the motels would be bought around the country to provide shelter.

But he said he could not guarantee that everyone will be housed this winter.

"The Ministry of Social Development is absolutely committed to working with everyone in our communities - whether that's in Auckland or elsewhere in the country - to make sure we leave no stone unturned to provide people with safe, secure accommodation."

Mr Gallacher said motels were being used as a temporary option until more emergency housing was built.

He said since last winter 265 places had been built and were all tenanted, 220 more were expected to be ready in the next two months and another 430 would open over the rest of the year.

Among the new emergency housing developments in Auckland, a new complex in Otahuhu, south Auckland with 43 units would provide "safe, warm and dry accommodation for up to 250 mums and dads and children through the course of this year".

Mr Gallacher said the Ministry was looking at a handful of motels in places where "the need is pressing".

"It makes sense for the MSD and the government to purchase the motels so we can ensure ongoing stability for the supply of emergency housing for the families and individuals most in need in our communities," he said.