New figures show Auckland is building fewer than half of the new homes it needs to meet demand.

The new council data shows that while 10,000 consents were issued in 2016, only 7200 homes were completed. Photo: RNZ / Claire Eastham-Farrelly

Council data on the number of dwellings actually completed put the three-year total at just under 20,000 homes.

Traditionally, the only measure of new residential housing has been statistics on the number of consents issued for new homes.

Auckland Council has been developing new data to accurately measure the number of homes actually completed and able to be occupied.

Official estimates show Auckland needs between 13,000 and 14,000 new dwellings a year for three decades to meet and keep pace with the growing population. 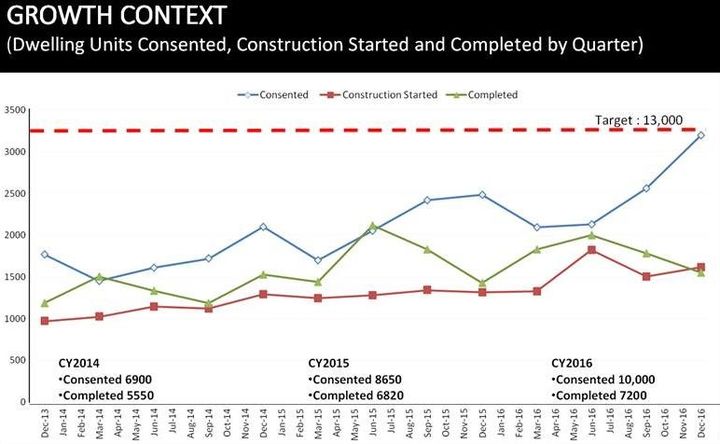 Consents sometimes take a year or more to be realised, particularly in apartment developments, but housing analyst Leonie Freeman said the level of actual construction was a worry.

"Despite all the focus and work and effort of a lot of people and organisations have put over the last 10 years into housing and trying to solve the issues in Auckland, we're only just meeting half the target," she said.

"What we really lack is the ability to implement some of the ideas that people have talked about."

The Australian-owned banks which fund many of the larger apartment projects, are understood to be tightening their lending, and there are reports that a lack of skilled labour is also slowing the rate of building.

"If we look at where we are in the property cycle, that also is a concern for future supply, because we are probably somewhere near the top, and developers are going to make decisions with that in mind," said Ms Freeman.

She said last year's 10,000 consents which had been heralded by some as a success, may have been fuelled by a rush to get consents before the introduction of new development rules in Auckland's Unitary Plan.