Edgecumbe is best-known for being struck, in 1987, by an earthquake that caused widespread damage. It was that quake that made the already low-lying town particularly flood-prone. 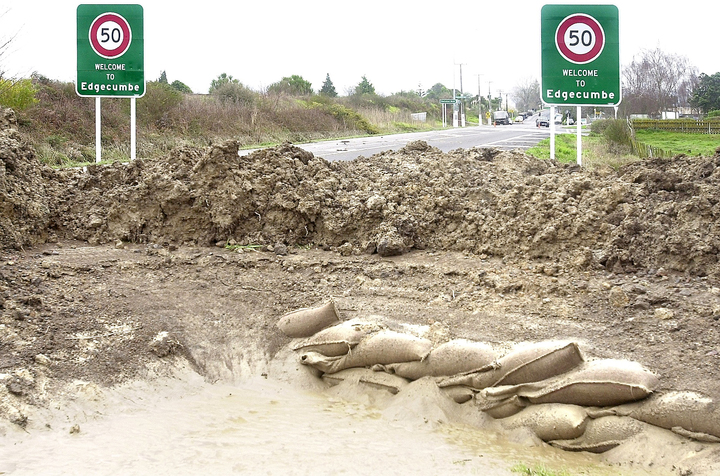 Flooding in Edgecumbe and the surrounding area in 2004 forced 3000 people from their homes. Photo: Supplied / Civil Defence

The town, population about 1600, lies on the edge of the Rangataiki plains, surrounded by kiwifruit orchards and dairy farms.

Wending through the town is the Rangataiki River: most of the houses to its west, while on the eastern bank is Fonterra's processing plant - Edgecumbe's major employer.

Smaller than neighbouring Kawerau and Whakatane, Edgecumbe was elevated from its status as an obscure rural service town in 1987, when a shallow 6.3 magnitude earthquake struck - damaging half the houses in town and opening up a 7km-long rift in the ground now known as the Edgecumbe Fault.

"The powerpoles - they weren't touching the ground, but they were swaying down, the tops of them, to within about six feet of the ground and then standing up again," a witness told RNZ 10 years on.

Nobody died as a direct result of the quake, but the damage had a lasting effect.

A local pub hotel closed down, along with the town's shopping centre, and several banks closed their branches.

"Some of the heart of the town went and never came back," one resident told RNZ. 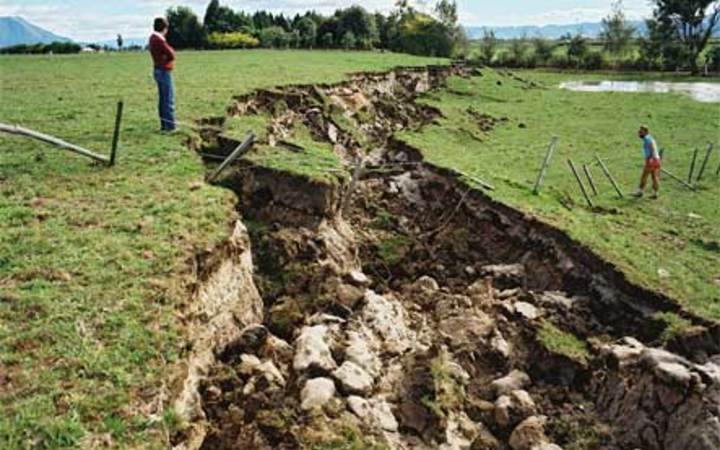 The Edgecumbe Fault, 4m deep in some places, was created by the 1987 earthquake. Photo: RNZ/Supplied?

The quake had another important effect: it dropped parts of the town and surrounding rural land by up to 2m.

"Areas that previously drained by gravity now have to be pumped. In flood conditions the Rangitaiki River, which flows through the town, runs higher than Edgecumbe's ground level," the report said.

"This situation makes it difficult to safely manage stormwater in heavy rains. Loans which the council took out for the recovery works from earlier disasters are still being paid off."

In 2004, an already-wet winter culminated in a massive low-pressure system in July, with nearly 300mm of rain falling in Edgecumbe in three days.

On 18 July, a stopbank upstream of Edgecumbe was washed out, flooding vast swathes of farmland and some houses, and forcing 3000 people in the district to evacuate.

"The general opinion afterwards was that if the river had not breached when and where it did, it would have breached the bank ... within Edgecumbe with catastrophic consequences for the town," local environmental engineer Peter Askey told a 2011 Water New Zealand conference.

Less than a year later, in May 2005, heavy rain again caused flooding in Edgecumbe - although this time it was the settlement of Matata, on the coast north of Edgecumbe, that was worst-hit.

A NIWA summary of events said the downpour "turned small streams into raging torrents and swept down carrying logs, huge boulders and river silt", causing a major debris and mud avalanche to come crashing through the township.

In a report into the disaster, GNS Science listed the effects: "Closures of the main road and railway; the destruction of 27 houses in Matata and damage to a further 87 properties; the evacuation of 538 people; disruption to water and electricity supplies, stormwater and septic tank systems;and the deposition of some 750,000m3 of debris throughout Matata township and lagoon."

After the 2004 and 2005 floods, the regional council embarked on a $13 million flood mitigation project, involving improving stopbanks and floodways along the Rangataiki.

The project is well under way, but completion is not due until 2020 - too late for the latest inundation, 30 years after Edgecumbe's first major disaster.