This week's extreme weather is just a small taste of things to come as the intensity of storms increases because of climate change, a scientist says. 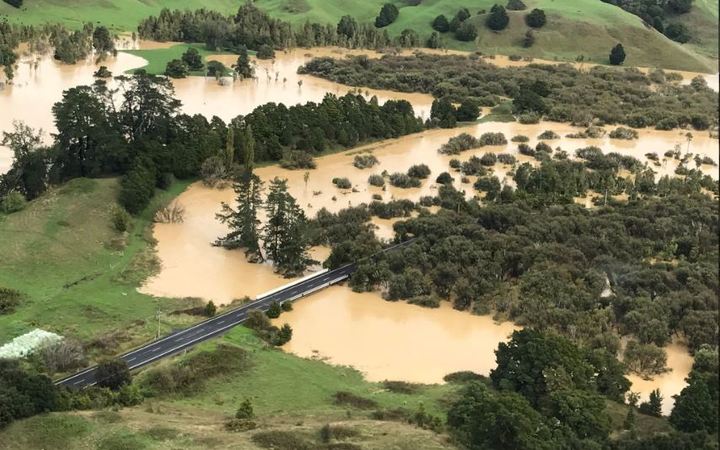 The risk of seeing such storms was increasing as time went on, he said.

"It's not as though every time there's a storm it's going to be like this, or that there's going to be torrential rain every month, but it's pushing the odds," Professor Renwick said.

When there was a storm, it was more likely to bring heavier rain than it would without climate change, he said.

Professor Renwick compared pumping greenhouse gases like carbon dioxide into the atmosphere to putting on a warm blanket.

"What's underneath the blanket - i.e. us down at the surface of the earth - is warmer than it would be otherwise. More of the heat that is radiating up from the earth's surface gets intercepted [by greenhouse gases] in the atmosphere and is radiated back down again - exactly the way a thicker duvet works on a bed."

This leads to warmer oceans, which means more evaporation, increasing the amount of moisture in the air.

With every degree the atmosphere warms, the amount of moisture the air can absorb increases exponentially - by about seven percent. More warmth means exponentially more wet.

NIWA climate data from last month noted that parts of Auckland, Waikato and the Bay of Plenty had rainfall at more than 300 percent higher than normal.

Whangaparaoa, north of Auckland, received March rainfall of 354mm - nearly five times the normal March total rainfall. Most areas of New Zealand have between 600 and 1600mm of rainfall, spread throughout the year, NIWA said.

It is not just intense storms that we are likely to see as a result of climate change.

"The combination of climate, vegetation change and people ... [means] we are likely to see this type of fire behaviour increase throughout the drier parts of New Zealand," Dr Strand said.

New Zealand's maritime environment had "buffered" the country from extreme fire seen in other continents such as Australia and America, Dr Strand said.

Extreme fire would increase here if the climate trend continued.

Sea level rise will continue for several centuries even if greenhouse gas emissions are reduced - the prediction for New Zealand is an increase of 18 to 59cm between 1990 and 2100.

The projected increase in westerly wind could also influence the ocean waves. In particular coastal regions exposed to prevailing winds could see an increase in the frequency of heavy swells that would add to effects of higher sea levels.

It's predicted that snowlines will rise, the duration of the snow season will decrease and glaciers will continue to melt. Drought risk for areas prone to dryness will likely increase in the next century.

Read more on this topic here.