Flooding and slips have trapped residents and schoolchildren as torrential rain sweeps across the central and upper North Island. 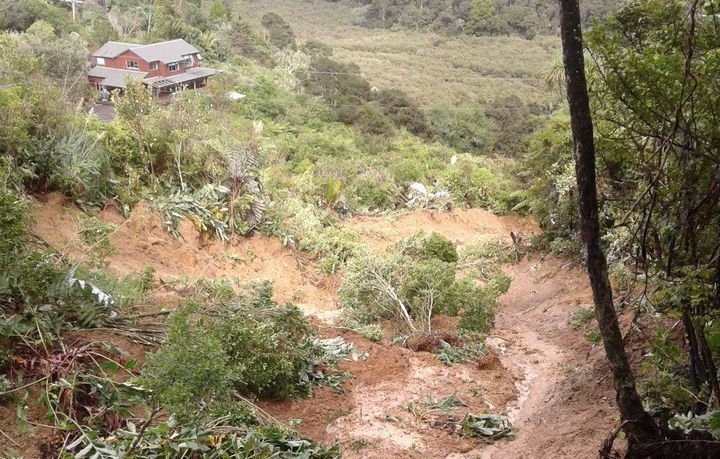 A slip on Landing Road in Titirangi has trapped 16 residents in five houses. All the residents are safe, Auckland Civil Defence says. Photo: Twitter / @AucklandCDEM

Heavy rain has caused landslips, closed roads, closed dozens of schools and forced the evacuation of about 200 homes in Whanganui.

MetService warned of heavy downpours for the central North Island until the early hours of tomorrow.

She said most rain over other parts of the North Island should ease tonight.

A large band of heavy rain was moving south and would affect Wellington, while the top of the South Island was expected to have very heavy downfalls ovenight and early tomorrow, she said.

Police today searched the swollen Waikato River at Ngaruawahia after a man was seen struggling in the water early this afternoon.

Officers said they were not sure if the person got out.

The river was running at a higher-than-usual level after heavy rain.

About 150 schoolchildren would spend the night stranded at a Port Waikato camp, on the south bank of the Waikato River.

The road to the settlement was blocked by a large slip.

The Waikato District Council said the children were not at risk. Authorities earlier hoped to get them out this evening, but had decided they would need to stay there overnight.

Meanwhile, about six west Auckland families have been cut off by a huge slip blocking their shared driveway.

A resident of Landing Road, Titirangi, Tony Matthews, said the slip was hundreds of metres long.

"With the rainfall it just just took the whole face of the slip out. It's run across our road... it's really huge. It's cut us right off," he said.

Mr Matthews said people were trapped where they were, or cut off from returning home from work.

Residents of clifftop properties on Auckland's North Shore, at Waiake Bay, were allowed to stay in their homes for now, after a slip overnight put them at risk. 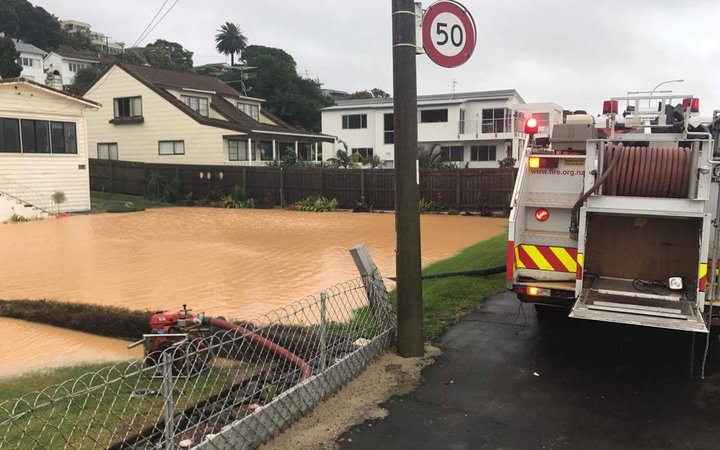 Part of the clip collapsed into the sea - taking trees, gardens and fences with it. Auckland Council engineers assessed the area and said the homes were safe.

In east Auckland, some residents of a block of apartments in Kohimarama forced out by a slip last night were likely to be allowed back in this afternoon.

However, four units at the back would stay closed until mud and other debris was cleared.

Flooding closed about 20 local roads around the Auckland region, including the intersection of Great North Road and Clark Street in New Lynn, which flooded during heavy rain last month.

The Fire Service said earlier water was 30cm deep in one Milford house and staff were trying to save homes on Maraetai Drive in Beachlands.

There were patches of flooding along Tamaki Drive and drivers should take care, Auckland Transport said.

The Fire Service has been inundated with calls for help. It said it had received 500 calls since 5pm yesterday - more than 180 of those from Auckland.

More than 150 graves in a cemetery on Tamaki Drive have been submerged.

A large pool surrounds the Okahu Bay Papakainga Urupa, with only the tallest headstones showing above the floodwater.

Sharon Hawke, of Ngati Whatua Orakei, said distressed family members had turned up at the urupa all morning.

Ms Hawke said they would investigate why the pump system had not coped.

Low-lying flooding around some coastal areas on the Coromandel Peninsula is possible overnight as another predicted band of heavy rain coincides with a high tide.

The Waikato Regional Council said the high tide was due about 2am.

Hazards team leader Rick Liefting said, because the land was saturated, debris and rocks could wash down streams, causing damage.

The settlement of Waharau on the western shore of the Firth of Thames was cut off to vehicles. A slip blocked road access north, while access from the south was closed to cars after floodwaters compromised a bridge.

The Tuakau Bridge-Port Waikato Road would remain closed and be assessed tomorrow morning.

There was a lucky escape in Waikato this morning as occupants of a car sinking in flood water in Whatawhata, near Hamilton, managed to get out.

Waikato Regional Council said some localised flooding had closed roads but there were no widespread problems.

Further south, Ruapehu District Council put its Emergency Operations Centre on standby, with a burst of up to 70mm of rain forecast later today.

The council said there had already been flooding in the north of the district, in the usual flood-prone areas of Matiere and Ohura.

It advised people to avoid travel unless absolutely necessary.

SH1 was down to one lane after a slip came down between Taupo and Turangi, at Bulli Point.

In Bay of Plenty, SH30 at Tikitere, between Rotorua and Whakatane, was closed because of a slip.

Police said wet weather had caused disruption to the roading network in the Bay of Plenty District.

They asked people to avoid all unnecessary travel.

The severe weather has forced the closure of 89 schools and 84 early learning centres in the North Island.

In Kaikōura, where heavy rain was expected later today, residents living near dams created by the November earthquake had been told to evacuate.

The earthquake dammed streams in the valleys above Hapuka and Goose Bay.

Kaikōura District Council recovery manager Danny Smith said homeowners in the flood paths were told last night to stay away while the severe weather warning was in place.

SH1, south of Kaikōura, was closed by landslips. It would not reopen until at least tomorrow morning, Mr Smith said.

The NZ Transport Agency was monitoring the inland route, which is the only remaining road into Kaikōura.

In Christchurch, the council set up pumps as a precaution in the floodprone Flockton Basin, with heavy rain expected there later today.

Live map, with the latest information on flooding and river levels: