Heavy rain and flooding is likely this week as large amounts of moisture, an after-effect of devastating Cyclone Debbie over the Tasman Sea, loom over New Zealand. 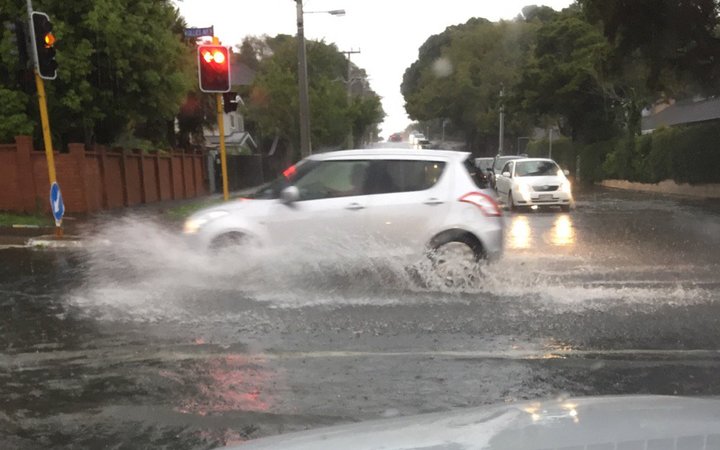 Heavy rains brought flash floods to Auckland earlier this month, and the deluge is likely to return this week. Photo: Supplied / @lovedominionrd

NIWA meteorologist Ben Noll said a serious situation was arising in New Zealand in what he described as a "tropical torrent".

He said an "atmospheric river" - a remnant of Cyclone Debbie - was aimed at the country and would contribute to very heavy rain and likely flooding.

NIWA said the torrent could bring two to three times the amount of normal rainfall for the entire month of April in just a couple of days.

Places in the firing line included Waikato, Taranaki, Manawatu, Hawke's Bay, Wellington and the top of the South Island.

He said up to 300mm of rain could fall on Wednesday night in some places, with more to come on Thursday as well.

"Some places will be getting two, three, four times their monthly rainfall amount."

He said flooding was going to be a "major, major threat", with indications that Taranaki could get "incredible amounts of rain".

Many parts of the country have already had a wet end to summer with record rainfall and flooding in the north of the North Island, Auckland and Coromandel earlier this month.

Wellington could normally expect to get about 86mm of rain in a month but NIWA said it could get nearly double that by the end of the week.

MetService said the very humid air moving over the country today was likely to bring extensive low cloud and fog, with the heavy rains and strong winds predicted to begin in earnest tomorrow.

It said the heavy rain should start in Taranaki about midnight tonight and continue through to Wednesday, with 250mm to 400mm expected to fall on the mountain and 150mm to 200mm elsewhere in that time.

Rain bursts - of 20mm to 30mm per hour - could fall from tomorrow evening through to early Wednesday, it said.

Rain in Whanganui was also expected to be heavy overnight before turning to showers on Wednesday, with about 150mm to 250mm expected between early Tuesday and midday Wednesday.

With up to 30mm falling per hour in the Tararua Range from tomorrow morning, MetService was expecting total rainfalls of 200mm to 250mm, and further into Wairarapa up to 20mm per hour were expected.

A ridge of high pressure should bring fine weather to much of the country by the weekend, the agency said.