The head of Statistics New Zealand might have sped up work on strengthening Statistics House if she had seen an engineer's report from 2013, she says. 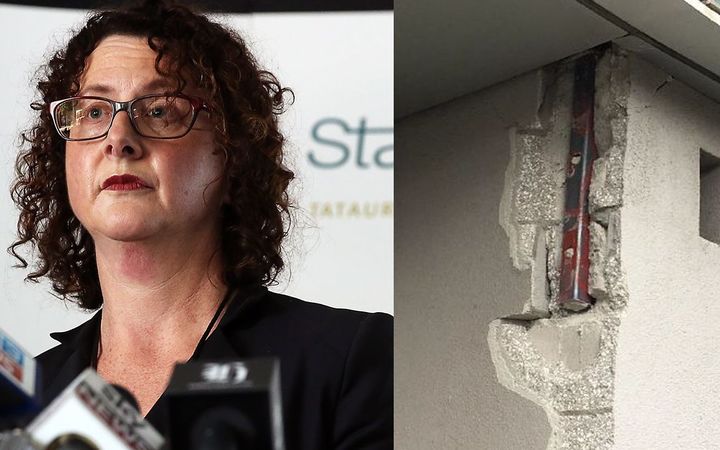 Government Statistician Liz MacPherson and some of the damage at Statistics House after November's 7.8 magnitude earthquake. Photo: RNZ

The results of an inquiry into the building's failure after November's 7.8 magnitude earthquake, released today, found the highly flexible building moved more than expected and concrete beams elongated, so that three pre-cast concrete floor units - on two floors - partially collapsed.

Engineers knew this part of Statistics House was vulnerable and work had begun to strengthen it - but it was only partway through when the 14 November 2016 earthquake hit.

Checks after the 2013 Seddon earthquake had shown the ledges that the concrete floor beams sat on were up to standard but should be widened.

She said she signed having seen engineering advice to CentrePort that the strengthening should happen over five to 10 years, and it began in September 2016.

By the time the earthquake hit, two floors had had work done: retrofitted catch brackets and diaphragm ties had been installed on level four and partly on level three. The floor units failed on floors where this work had not been done.

Ms MacPherson said she did not see a report from October 2013 saying the concrete parts being widened were a critical element.

"One of the learnings is that it might have been desirable for me to see that. If I did see it, what I would have done is take independent advice and, standing where I am today, I may have well made the decision to do things faster."

Ms MacPherson said, however, that the Government Property Group had been negotiating the lease since 2013, and they were experts.

The 2016 advice was not just from CentrePort's consulting engineer that designed the building, Dunning Thornton, but had also gone through an expert panel and independent technical advice.

CentrePort has been asked for a response in relation to Ms MacPherson's comments.

The government has ordered an overhaul of concrete design standards, and is looking at a law change so it can force owners to check buildings similar to Statistics House.

The inquiry panel recommended buildings in the Wellington region be checked urgently, but its findings applied everywhere in the country.

"This may occur in any region of New Zealand because a large earthquake is likely to create similar or greater demand on buildings," its report said.

More than 70 such buildings in the capital city's CBD had already been checked, and some were found to need upgrades.

CentrePort said in a statement earlier this afternoon that it welcomed the panel's conclusions, and noted that the investigators found the building complied with the standards at the time it was built.

"They also acknowledge the effectiveness of the strengthening work we were working with our tenants to complete when the earthquake struck," it said.

"The damage to the building was a shock to us and to the people from Statistics New Zealand and Ministry of Transport who worked there.

"We now have much needed answers to what happened and how."

It said it would make a decision on the building's future once its engineers and insurers had completed their deliberations.