The findings of an independent inquiry into why the 12-year-old building at the port failed so badly as a result of November's 7.8 magnitude earthquake were released this afternoon (PDF, 1MB).

They showed the design met industry standards at the time but this was not enough to prevent the concrete beams that held up the floors from failing.

The government has limited powers to force building owners to follow up such design problems.

Building Minister Nick Smith has told the Ministry of Business, Innovation and Employment to look at law changes to provide greater powers.

"The performance of Statistics House in the Kaikōura earthquake was unacceptable and could have caused fatalities. This quake was large and unusually long but a modern building like Statistics House should not have had life-threatening structural damage," he said in a statement.

"The building was designed to the industry practice of the time but this did not fully account for the effects of beam elongation during an earthquake, an issue that was deficient in the Concrete Structures Standard at the time of the design." 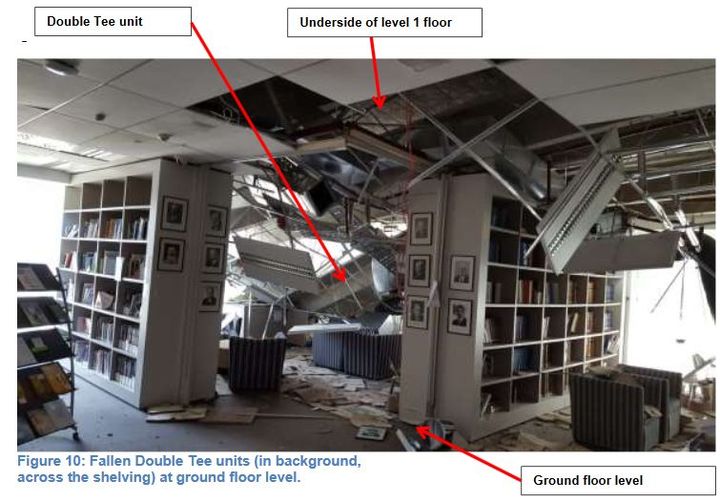 Damage to the ground floor of Statistics House (image from report) Photo: Supplied / Ministry of Business, Innovation and Employment

Changes to the relevant standard would be needed, he said.

"The design flaw is quite specific to highly ductile framed concrete buildings with pre-cast floor slabs and particularly those with multi bay frames. We need to follow up on similarly designed buildings through councils and engineering companies so that where it is a problem, it can be rectified.

"This has already been done in respect of Wellington as a consequence of the preliminary findings in Statistics House but now needs to be followed up elsewhere."

"This is not to do with reclaimed land but the amplification of ground shaking in a basin."

"It is a harsh reminder that our seismologists and structural engineers do not fully understand and [provide] 100 percent protection against earthquakes."

However, it was masonry falling off old buildings rather than the flaws identified in the report that posed the greatest risk to the public in an earthquake, he said.

Statistics NZ hopes for quick decision on the building's future

Government statistician Liz MacPherson said she welcomed the report and hoped it would prevent further failures of its kind.

"I remain forever grateful that the quake struck after midnight when no one was in Statistics House. It is my hope that CentrePort and their insurers can now accelerate decisions regarding the future of Statistics House."

She said staff wanted to know what would happen next.

CentrePort said in a statement it also welcomed the investigation's conclusions, and noted that the investigators found the building complied with the standards at the time it was built. 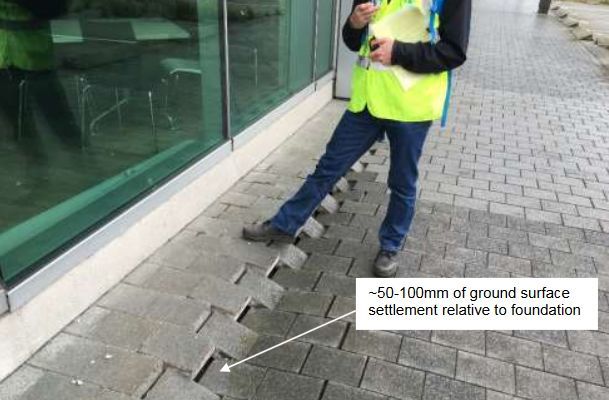 Ground surface settlement at the perimeter of Statistics House (image from report) Photo: Supplied / Ministry of Business, Innovation and Employment

"They also acknowledge the effectiveness of the strengthening work we were working with our tenants to complete when the earthquake struck," its chief executive, Derek Nind, said.

"The damage to the building was a shock to us and to the people from Statistics New Zealand and Ministry of Transport who worked there.

"We now have much needed answers to what happened and how."

The company would make a decision on the building's future once it had completed its own process with engineers and insurers.

The New Zealand Society for Earthquake Engineering said the results of the investigation would help lead to more resilient buildings.

"Statistics House illustrated how different factors can combine in unexpected and unprecedented ways."

The earthquake most severely affected mid-height buildings in Wellington and was at a magnitude that met or exceeded what they were designed to withstand, he said. 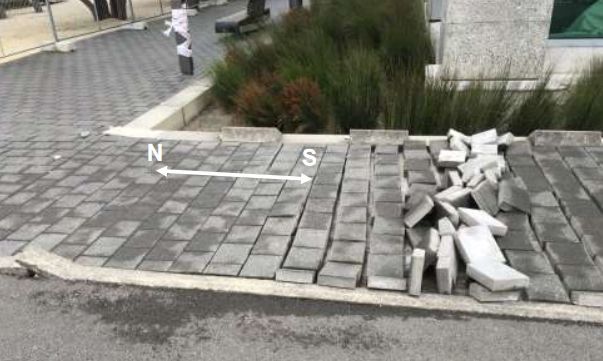 Compression of paving stones outside the building (image from report) Photo: Supplied / Ministry of Business, Innovation and Employment

Source: MBIE ('Investigation into the performance of Statistics House in the 14 November 2016 Kaikōura Earthquake', March 2017)