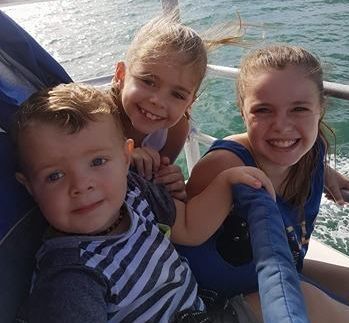 Joanne Kuzman's two-year-old is oblivious but her 11 and eight-year-old are anxious. Photo: Supplied

A New Zealand couple and their young children in Australia's Townsville have tied everything down and taped their windows as they brace for Cyclone Debbie.

Coastal areas of the Australian state are being battered by harsh weather as the storm bears down on the north Queensland coast.

Australia's Bureau of Meteorology predicts it will cross the coast as a category four cyclone.

Wind gusts of 232km/h have been recorded at Hamilton Island, and residents were in lockdown.

The centre of the cyclone is expected to pass directly over Airlie Beach, a tourist town north of Mackay.

At least 23,000 properties were without power, with more blackouts expected.

The Kuzmans - originally from Whanganui - moved to Australia in 2014.

Joanne Kuzman, who has three children, said they had three days to prepare for Cyclone Debbie, and had enough water and canned food to last two to three days.

"We've taped some of our windows, everything's sort of prepared, everything's tied down. We've got more games. I mean, we're anxious, but we're prepared."

She said her two-year-old son did not have a clue what was going on, but 11-year-old Samantha and eight-year-old Jessica "know what's coming and are a little bit anxious of the wind smashing on their windows and what's going to happen". 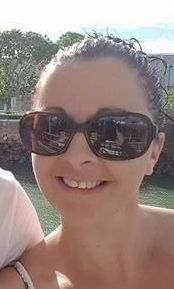 She said it was very calm at the moment with just slight winds "like a normal Auckland day" but she was expecting things to change this afternoon.

"We're expecting about 150km/h winds with about 200mm of rain. So not much for Townsville but it could get worse because it's looking at moving up to a category five so we may just get the end of it."

Mrs Kuzman said she was off the coast in Burdell, which was "a bit far away from the south of Townsville where it's going to hit mostly".

Her children's schools had been closed since yesterday and three of the main malls in Townsville were closed until further notice.

She had been told to stay inside and stay away from the beaches, she said.

She was expecting the worst weather to hit at 1pm local time (4pm NZ time) and in the meantime she was trying to keep busy.

"I've just cleaned the house and done some baking while we've still got power. And the kids are just playing games happily outside on the back yard at the moment." 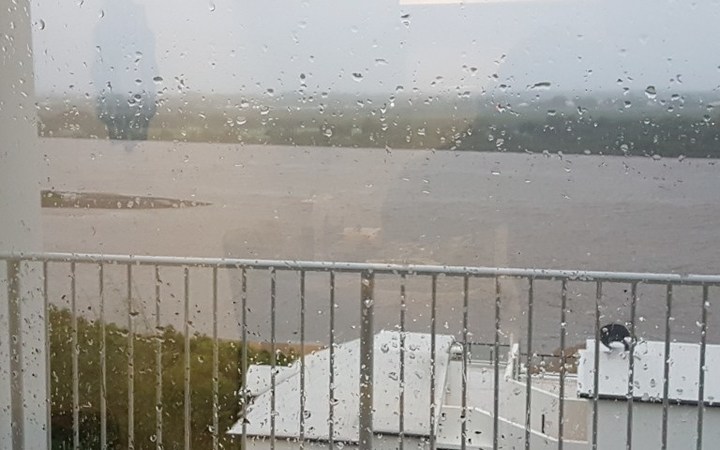 Another New Zealander living in Queensland was worried she would lose her entire livelihood and her three horses.

Julia Lewis, originally from Twizel, lives on 50-acre block north of Ayr. She said her orchard - of more than 1000 papaya trees and banana trees - was likely to be ripped out by the high winds.

She had spent three full days chopping out the trees close to the house to minimise damage.

But her biggest concern was what would happen to her three Clydesdale horses, she said.

"Clydesdales are just so quiet and I trust them with my life - they're absolutely bomb-proof - and yesterday, when we were trying to move them, they were nearly jumping on top of us," she said.

"It's just so out of character for them to be nervous animals at all.

"It was really quite scary moving them, they were extremely, extremely nervous."

Ms Lewis said she and her husband were prepared, in case they were cut off for days.

"We've got to be prepared for not having power for a few days ... We've boiled lots of water, and cooked food to eat cold out of the eskie."

Her property was remote and surrounded by creeks that could swell and overflow. They could also be physically isolated, which might mean they would not get outside help for days.

They planned to bunker down in the washhouse, while her 17-year-old son had been sent to their neighbours because of their low-lying brick house, Ms Lewis said.

The authorities had been painstaking in their messages to the public, warning them of the dangers, she said.

'The worst I've ever seen'

A New Zealand family living near Mackay said they were already getting 100km/h winds, and they were not expecting the worst to hit until 2pm local time (5pm NZ time).

Carolyn McKenzie is from Tokoroa but lives with her husband and three children in Mirani, about 30km inland from Mackay.

She said she had lived there for seven years and has been through "a couple of little cyclones in the past ... but this is the worst I've ever seen."

Everyone had cleared their yards of anything loose, but there were trees sideways outside right now, she said.

She normally got flooded when there was a storm, and water was already settling on her back lawn, she said.

"As soon as we hear there's a cyclone, everybody goes to the supermarket and pretty much clears out the supermarket. We could be flooded in for days by the looks of things. We had to stock up with food and what not, water, batteries, torches. We're probably going to lose power at some point today so we have to make sure we've got gas bottles to cook on.

"We've had to put all our vehicles against our shed door, because apparently shed doors tend to fly off."

She said her husband prepared everything before he went to work in the mines at the weekend.

"The nerves started kicking in last night when I realised 'oh my God, this really is going to be a severe cyclone'."

She said her children were excited and had learnt about the wild weather at school.

"My little one, he's only five, he usually gets scared of lightning and thunder. But because we've sort of been talking about it, my husband's been quizzing them on what to do in an emergency. They're all pretty excited."

They had not been asked to evacuate and hoped that did not happen, she said.

"We have to go into the smallest room in the house, which is my closet - I've got a nice big walk-in closet. We take mattresses and everything in there, have a radio, some supplies, water and what not ... We're all ready to go."

'We've seen a fair few of them'

Johnny Borchardt lives in Mackay with his wife, Sarah, and four children aged from two to 12.

There was a lot of wind right now, he said.

"There are a couple of trees down, as the TV reports, in the city centre of Mackay. There is some power out around the place, we currently still have power."

His parents were New Zealanders who lived near Auckland, but he was born in Australia and used to this kind of weather, he said.

"We've seen a fair few of them. It's not that we're complacent, but we just know. If you're not from here it's quite a big shock to you, it's a real eye-opener, but we kind of get used to these things. Yeah, you still act vigilant and not complacent."

He was trying to keep his children entertained but they were ready for stormy weather, he said.

"Just made sure we had you know a good supply of food, water, batteries, paperwork in order just in case. We went and froze a few water bottles and that in case the power went out to keep the meat cold and that. Got the car full of fuel, tidied up around the house, made sure everything was kind of [battened] down, brought the dog inside."

'Bunkering down the house'

Two other New Zealanders in Mackay have prepared a bunker in a wardrobe as they wait for the full force of the storm.

Adele French and her partner Arthur Hopkins, from the Thames area of Coromandel, have brought in supplies and are "bunkering down in the house", watching television for updates, while they still have power at their home in Northern Beaches, Mackay.

"We can't go anywhere now, it's too late to leave," Ms French said.

"We're up on a hill so it's not too bad at the moment - a few heavy gusts of wind.

"I'm feeling a bit sorry for the people a bit further down the line, down by the beach."

Footage from Adele French's home in Mackay in Queensland:

The state government last night warned 25,000 people living in parts of Mackay to head to higher ground, as dangerous tidal surges of up to 1.7m were forecast. Those who chose to stay were told to keep indoors.

Ms French said because they were on a hill they decided to stay. Her friends and family were safe where they were, and she has checked on the neighbour, who was fine.

The couple had stocked up on gas bottles, water and food for the barbecue.

"They've said for the last week that it was going to arrive here so we've pretty much been prepared for a few days now - which has been good because I didn't really want to venture out yesterday when it started to get a bit windy."

"We've got a few pillows and a mattress in the walk-in wardrobe - if need be we'll be jumping in there.

"It's sort of at the back of the house - the wind's hitting the front so we'll be much more sheltered there if we have to go in there."

"The houses are built very strong over here, obviously for these reasons. So we feel very safe where we are. As long as we stay indoors I'm sure we'll be fine." 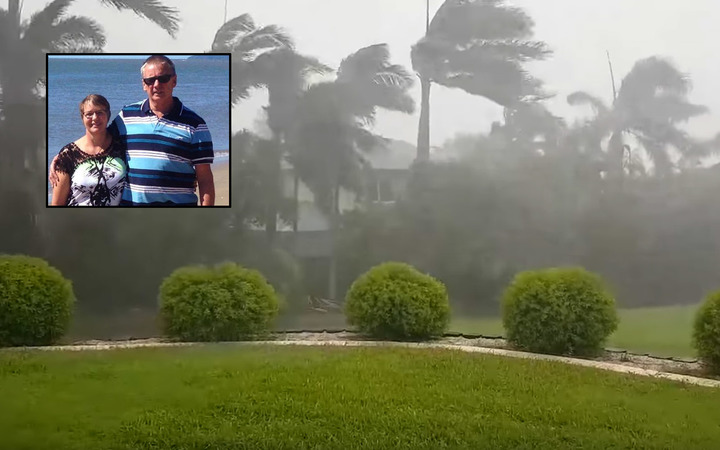 Adele French and Arthur Hopkins, inset, are preparing for Cyclone Debbie by building a bunker in their wardrobe. Photo: Supplied / YouTube / Breaking Disaster

Ms French says she'd had experienced a category one cyclone since moving to Queensland in 2011 but this one was "definitely an eye-opener".

It was very scary, and there was "constant rain" and wind, she said. Ms French said she was planning to move back to New Zealand in two years' time and, after this, she "can't wait".

MetService said remnants from Cyclone Debbie could make their way to New Zealand this weekend, or early next week.

Meteorologist Peter Little said it was possible that low pressure from the remnants of the cyclone could make its way to New Zealand, but it was too early to tell what effect it would have.

#TCDebbie: fairly sleepless night in Bowen Shelter where volunteers Vaurian and Danielle are looking after 270 folks sleeping on the floor pic.twitter.com/Fz0HFlj3KS

Crazy wind and rain in Airlie Beach. Been going all night but still getting stronger. #TCDebbie @abcnews pic.twitter.com/geIxfHE4d3