Dairy owners want cigarette companies to pay for security to protect them from attacks. 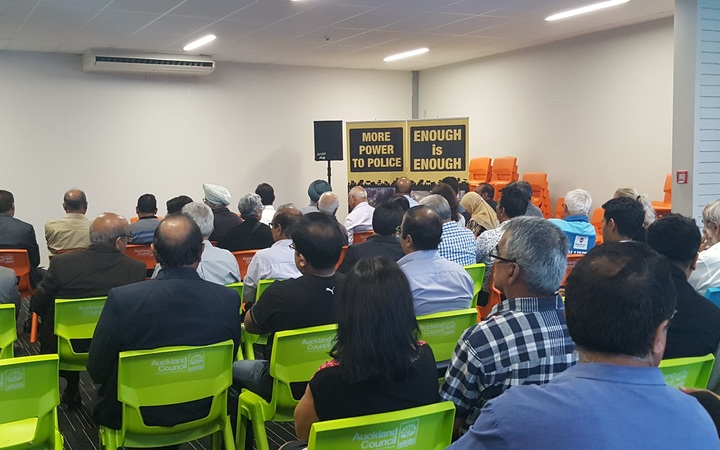 A spate of recent violent robberies on Auckland dairies and liquor stores has sparked an outcry and led to the establishment of the Community Action Group in Mt Roskill.

About 70 concerned residents and shopkeepers turned out to its first meeting at the Fickling Communite Centre last night.

Six violent robberies in the past 10 days have left dairy and liquor store owners scared to turn up to work unarmed.

Sunny Kaushal, who runs the action group, said the trio smashed bottles and fled with alcohol, leaving the owner with multiple injuries.

Enough was enough, he said.

"Every other day you're seeing people in broad daylight, especially the teenagers, armed teenagers... they're entering into the dairies and they are assaulting the shopkeepers. And they loot and go."

Mr Kaushal said people felt unsafe in their shops, at home and on the streets.

The group will take a petition to Parliament, seeking increased police patrols, re-opening closed police stations, giving shopkeepers the right to defend themselves and lowering the youth age to 11.

A protest is planned for next month.

Mr Kaushal said over the past 10 days, about 50 dairy and liquor store owners told him what they put up with.

"One of the shopkeepers said that 'we work 14 to 16 hours a day, and we constantly live in fear', Mr Kaushal said.

Another told him the offenders did not give damn about police and were "not afraid of anything. A third asked who would look after his children or pay his rent and mortgage if robbers seriously injured him.

A person behind the counter, working long hours, "symbolises a weak person", he said. "He is already drained. So every 13-year-old thinks, 'Oh, I can take a shot at him'."

Ash Dardarji, a former Auckland Indian Association president, who worked for 30 years behind a dairy counter, rejected that idea, saying dairy owners could not afford to cut their hours.

He did question whether the small profit dairy owners made selling cigarettes was worth the risk.

Mr Dardarji said the three main cigarette companies who supplied the country's outlets made enough money to help with security.

"They are not looking at those who are selling the cigarettes for them...they're not getting hurt.

"It's the person who is selling it, he's the one getting hurt. His family is getting hurt. What I am asking is for the company to do something about."

British American Tobacco and Imperial Tobacco said the increase in government tax on cigarettes had made it lucrative for crime.

A British American Tobacco spokesperson said the company worked with retailers and local police to clamp down on crime and was happy to talk with the Action Group.