Aucklanders are not yet saving enough water to definitely avoid a city-wide boil water notice. 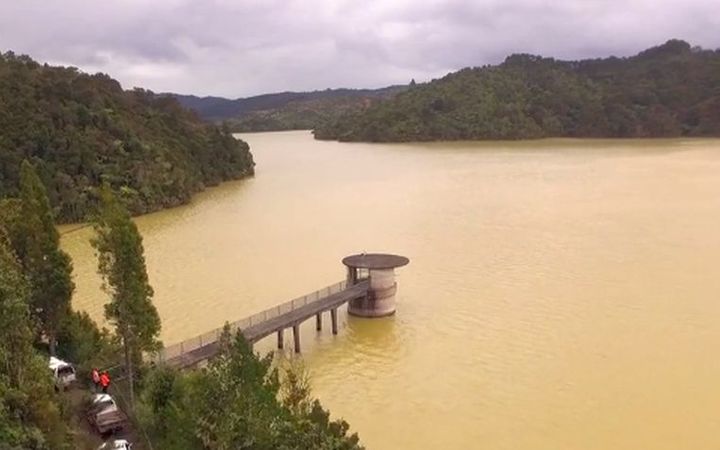 Very high sediment levels can be seen in the dams in the Hunua Ranges. Photo: Watercare

The city's main water treatment plant was swamped with silt and debris after Wednesday's heavy rain, slowing its ability to process water.

Watercare said use needed to be down to about 400 million litres of water a day.

In the past 24 hours, Aucklanders have used 415 million litres.

Watercare said if the target was not met, it might need to release untreated water into the system which would then need to be boiled.

"Currently we are meeting demand - none of our customers are without water - and the quality of the water has not been compromised. It's safe to drink straight from the tap.

"The situation at Ardmore is stable, but if we can't achieve the targeted water usage savings we may be forced to release partially treated water into the region's supply. In such a situation, a boil water notice would be issued."

"The clarity of the water entering the Ardmore Water Treatment Plant is still about 100 times worse than what we would expect to see entering the plant," said Mr Jaduram.

He was out this morning surveying the damage after the latest torrential rain and said the council will be asking Watercare to report on the water shortage.

"We expect to be able to turn our tap on, and for there to be clean and safe water and if for any reason, the safety and the quality of that water is compromised, then we have to consider what might need to be done to prevent that happening again."

Mr Goff said he was monitoring the situation.

"It'll be something that we'll be asking Watercare to report to council on," he said.

Waihi and Waikino residents in the Bay of Plenty have also been asked to conserve water for the same reasons.

The Hauraki District Council said the problem should be resolved in the next two days.

Water pressure has been reduced to Thames Valley South households near the Hauraki Plains after silt and sediment also restricted the supplier's ability to filter the water.

The Thames Coromandel District Council said contractors had managed to partially restore the Omahu water supply, but they suspected there was a break in the mains.

The Council said the break was proving difficult to find because of the large volumes of surface water in the area.

It said a tanker was parked across from the Puriri pub with water for residents who needed it.

The Hamilton City Council has also asked residents to conserve water for the next three days as a precautionary measure, in case it needed to shut down a water main.

The site, which supplies about 27,000 homes, runs under the Waikato River from the city's water treatment plant opposite Hamilton Gardens.

The City Council said it was monitoring the site.

Spokesperson Maire Porter said if the site was shut down today, the impact on the city's supply overnight would likely be similar to what happened last month.

There was some pressure loss, but no households lost their supply when a substantial section of the riverbank collapsed around the Bulk Main in early February.