New Zealand's involvement in the world's largest ocean science project has given the country access to information which little more than a decade ago was out of reach. 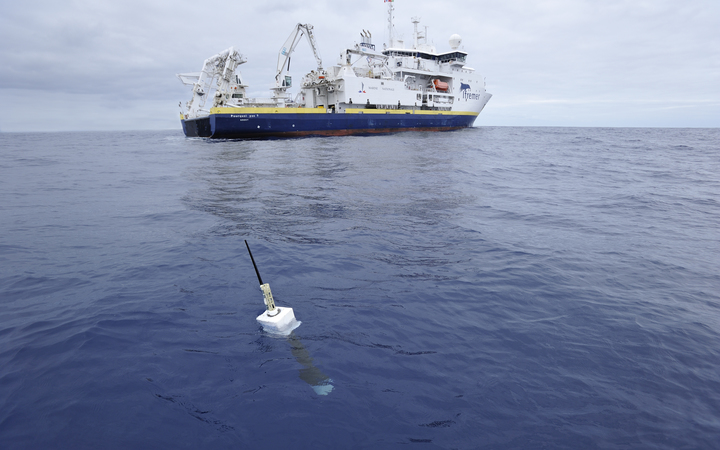 A float deployed from a French research vehicle as part of the Argo project. Photo: Supplied / Argo

The National Institute of Water and Atmospheric Research (Niwa) is celebrating its 16th year of collaborating with the United States on the international Argo float programme.

The project collects data from the upper layer of the oceans around the world and has helped give a better understanding of ocean temperatures, salinity, and sea-level rise.

The programme deploys "floats" - devices that sink to a depth of 2000m and are carried by ocean currents for about 10 days before rising to the surface again. They act somewhat like satellites, collecting and sending information to a database which is accessible to anyone around the world.

So far the data has contributed to more than 2500 thousand research papers, said co-chairman of the Argo steering team Dean Roemmich.

The broad range of work that's been done with Argo data was impressive. "We have 30 countries involved and I think we're all waiting very eagerly to see how many more are going to become involved."

Niwa oceanographer Phil Sutton said the data had already been used to improve El Nino and La Nina forecasting across the world.

Dr Sutton said there has been a lack of information about the South Pacific ocean. Argo data was being used more and more around New Zealand, such as for studying conditions of Orange Roughy spawning grounds.

Even 15 years ago scientists could not have conceived of doing studies on the ocean that are now being conducted, said Howard Freeland, Argo director from the Institute of Ocean Sciences on Vancouver Island.

The Argo team said the key to the programme's success had been that the information was totally free and accessible.

The data is helping estimate what is known as the heat budget. Heat coming into the planet is recorded from satellite data at the top of the atmosphere but then goes into different reservoirs, either warming up the air, land or ocean or melting ice. The main unknown is the deep ocean, and Argo helps scientists to understand where that energy is going. It also helps to map rainfall changes by looking at the salinity of the ocean.

About 4000 Argo floats have been deployed in the world's oceans. More than 1000 of them have been launched by Niwa between New Zealand and Chile, Durban, Mauritius, Tahiti, San Diego and Hawaii.

Over the next few years the team hopes it can get floats to deeper levels of the ocean.

Nations producing data include China and India, Canada and the US, along with countries in Europe, Africa and South America.