A new initiative from the Ministry for Women is aiming to encourage more women to consider trade careers, but one builder says many employers don't want to hire females.

The project, which has been jointly commissioned by the Ministry for Women and Ako Aotearoa - The National Centre for Tertiary Teaching Excellence, will work with women in trades, and employers, to find out what needs to be done to change the male dominated sector. 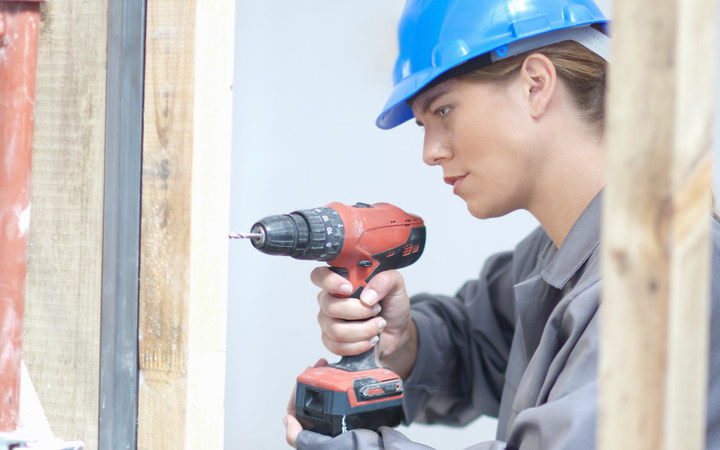 More women are being encouraged to consider working in the trade industry. Photo: AFP

A PWC report last year found that while more women were joining the sector, the ratio of male to female workers remained at around 6 to 1.

Kate Bathurst left her postie job in 2006 to become a builder after helping with renovations on her house.

She hadn't considered building earlier in her life and it was not common to see women on building sites, she said.

"When I was growing up and going through high school no one ever said to me, "Hey, what about the trades?"

"I was always quite a practical person and maybe school wasn't my strength but that, in my mind, was never an avenue I could pursue.

She said there were a lot of employers who didn't want to hire women.

"I think there's probably a wee way to go, but it's getting better."

More than $500,000 is being spent the new three-year research project, which involves a host of educational organisations from training organisations to schools.

The CEO of the Building and Construction Industry Training Organisation (BCITO), which is leading the project, said it was important to diversify.

"We're highly under represented, in the space that BCITO looks after about two and a half percent of our trades people are female and it's a hugely untapped market particularly at a time we have huge skills shortages.

He said while some firms preferred women in their workforce, there was a lot to be done to help employers.

Encouraging women to apply in job ads was one way employers could help, he said.

Construction needs to move away from 'macho' image

Kelston Girls' College in Auckland encourages young women to get into the trades, with senior students given the chance to experience building sites and work towards an apprenticeship after school.

The school is taking part in the project and principal Linda Fox said in her experience not all companies were willing to take young women on.

"The whole business of getting parents and the general community aware that this is a viable option for women has to be a very important part of this and I think the research is going to be very helpful for that reason."

National Association of Women in Construction president Donna Howell said it was important to get away from the macho image that dominated the industry.

"For a long time now there's been an expectation that over time as we advanced in society generally towards more parity that there'd just gradually be an increase in the number involved and that that in itself would lead to a change in culture.

"But I think the reality is that the culture change has to come first, so that we can get to a point where women feel welcome and comfortable in that environment.

She said TV advertisements for the building industry often painted a picture of only men in the industry, and there weren't many women role models visible.

The research aims to provide tools and guides for women, employers, educators and industry decision makers by 2019, followed by a report into its findings.