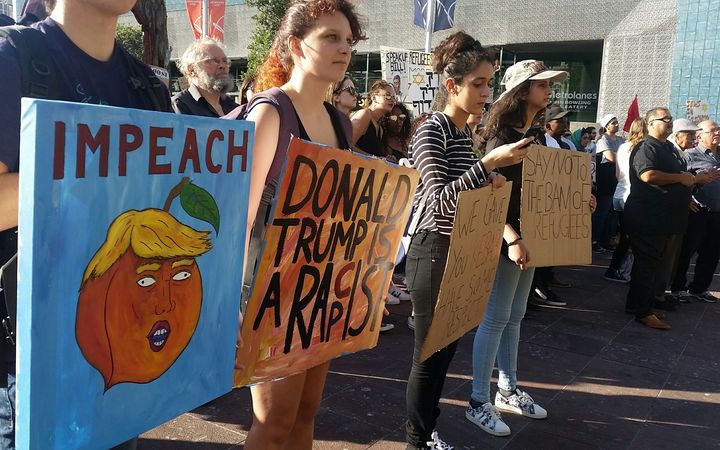 Protesters at the NZ No Ban, No Wall demonstration in Aotea Square. Photo: RNZ / Anusha Bradley

The No Ban, No Wall protest is one of several organised around the world, after Mr Trump instigated a 90-day ban on people from several mostly-muslim countries and a 120-day ban on refugees.

A ring of police blocked a small group of Trump supporters at the edge of the protest from mingling with protesters. 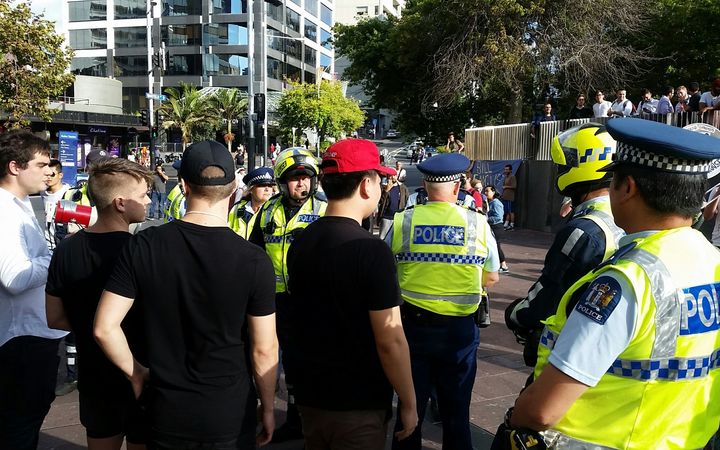 The group that organised the protest, Aotearoa Against Muslim Ban, said Mr Trump's singling out of muslims was a scary step towards fascism. They called on Prime Minister Bill English to denounce the orders as racist.

"These border policies are racist, Islamaphobic and unacceptable," one of the organisers, Mehwish said.

"They continue a pattern of white supremacist immigration exclusion in colonial settler countries like the United States. Bill English refusing to call it for what it is - racist - is a dangerously weak response and doesn't represent the people of Aotearoa," he said. 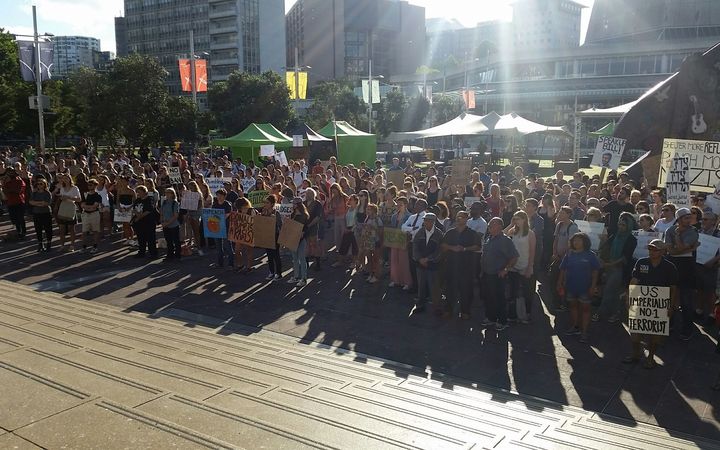 Part of the crowd at the No Ban, No Wall protest. Photo: RNZ / Anusha Bradley

Refugees can enter the US, after Federal Judge James Robart issued a temporary restraining order on Trump's travel ban.

The Trump administration appealed the ruling, but it was rejected.

A full federal appeals court hearing has been set for Tuesday (tomorrow NZ time) on whether to allow or reject the ban, which affects people from Iran, Iraq, Libya, Somalia, Sudan, Syria and Yemen.

The Justice Department has filed a brief arguing it was a "lawful exercise of the president's authority" and not a ban on Muslims.

The brief said the president was best placed to make decisions about national security; it was "incorrect" to call it a ban on Muslims because the seven countries were identified for their terror risk; the executive order was therefore "neutral with respect to religion"; and aliens outside the US had no rights to due process.

Whatever the decision, the case could end up in the highest court in the US, the Supreme Court.

The last immigration case that reached the justices there ended in a 4-4 tie.

If Mr Trump's nominee to fill the ninth berth, Neil Gorsuch, is confirmed in time, it could tip the balance in the president's favour.

Who has spoken out against the ban?

The states of Washington and Minnesota have argued that, as well as being unconstitutional, the travel ban is harmful to their residents, businesses and universities.

Attorneys general in 16 states have signed a letter condemning the ban. Lawsuits have been launched in 14 states.

Former secretaries of state John Kerry and Madeleine Albright and former CIA director Leon Panetta joined others in drafting a letter describing the travel ban as ineffective, dangerous and counterproductive.

Lawyers for tech firms including Apple and Google lodged arguments with the court, saying the travel ban would harm their companies by making it more difficult to recruit employees.