A Wellington restaurant which employs refugees at its catering business has seen a spike in orders since US President Donald Trump's ascension to power. 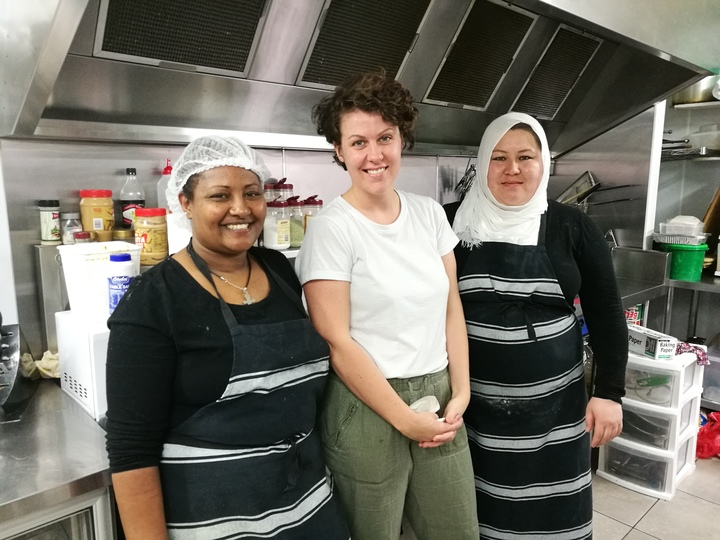 With turmoil, terror and Trump dominating worldwide headlines, Wellington entrepreneur Rebecca Stewart offered refugees a place to not only work, but to learn about living in New Zealand.

By 10am every morning, Ethiopian restaurant Adulis is usually buzzing, but it is not from customers, but from refugees working to send out lunch orders from catering business Pomegranate Kitchen.

Founded in early 2016, Pomegranate Kitchen solely employs refugees, offering them a chance to earn a living in Wellington.

The kitchen employs four cooks, under the watchful eye of co-founder Rebecca Stewart.

"What I saw was that there were a lot of people who were willing to work ... not only for money but also to become more integrated into New Zealand society."

Ms Stewart said her cooks had left for reasons such as political unrest and being in a minority group - some even left families behind.

Anti-Muslim rhetoric from the US was not helping their state of mind, she said.

"I said to the cooks yesterday, 'There's been a lot of news from the States, and it's scary for you, but we've seen a really big spike in lunch orders.'"

One of the cooks, Genet Seyoum, found it difficult when she first arrived in New Zealand from Ethiopia.

"I was confused - and then one by one I learnt everything, I saw everything, and now I'm happy."

The most recent statistics from the United Nations predicted almost 21.3 million people had fled their homes as refugees, with a variety of reasons.