Food for the soul - Pomegranate Kitchen 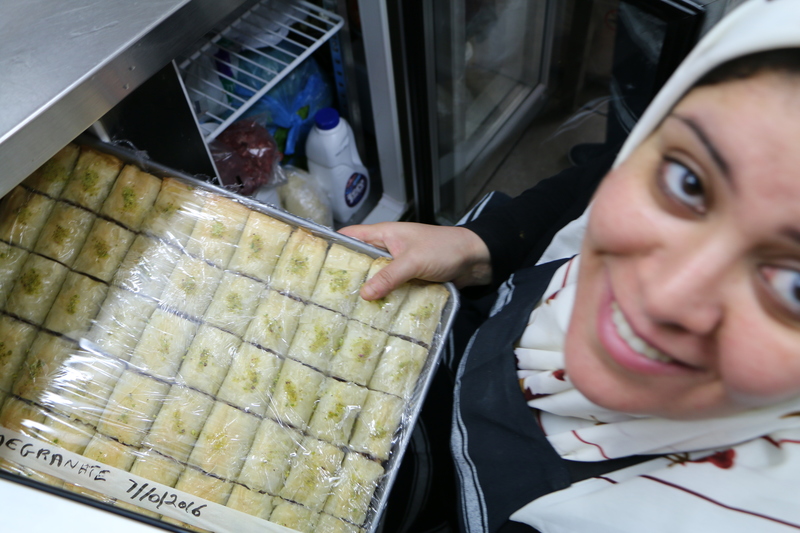 Hajar with trays of prepared baklava 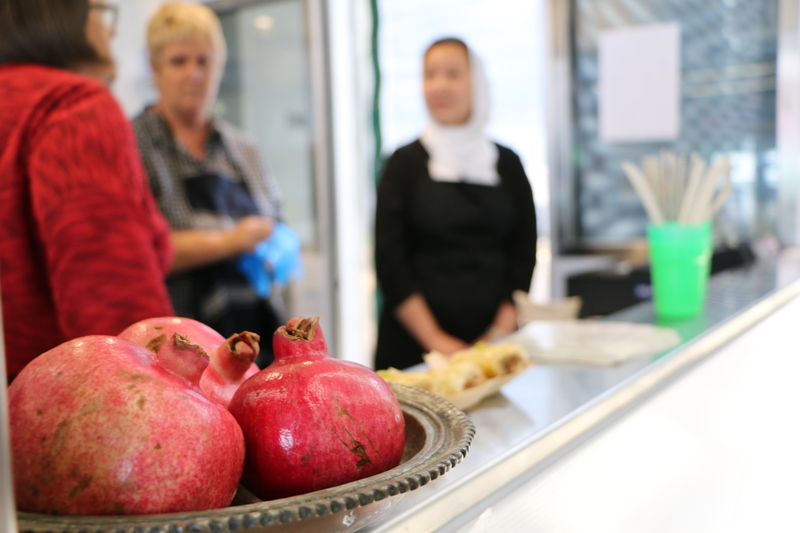 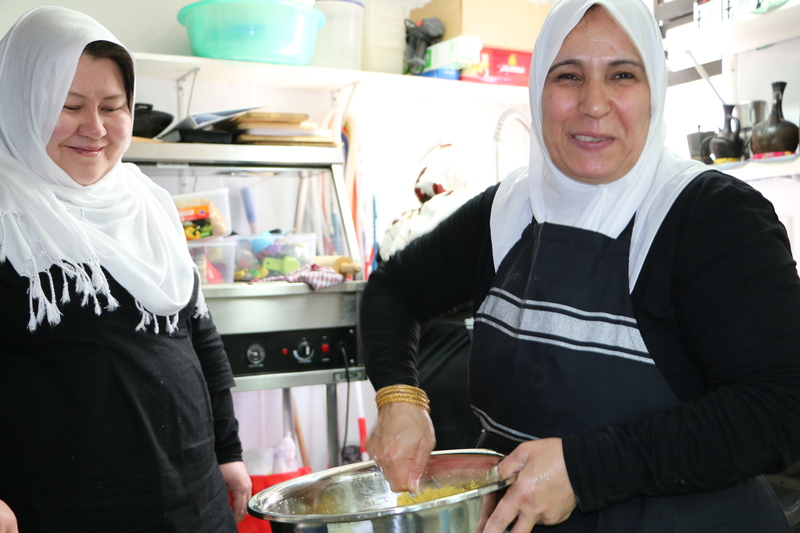 Fatima and Muna in the kitchen 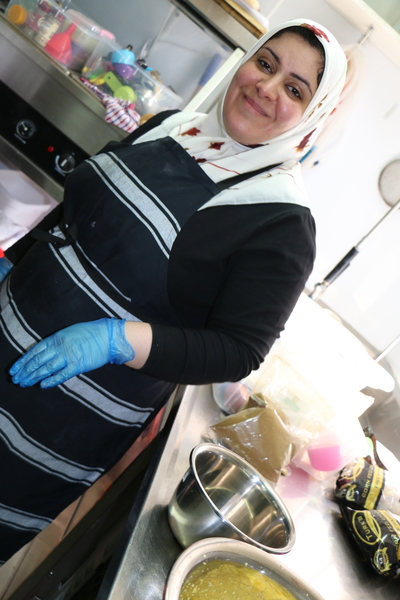 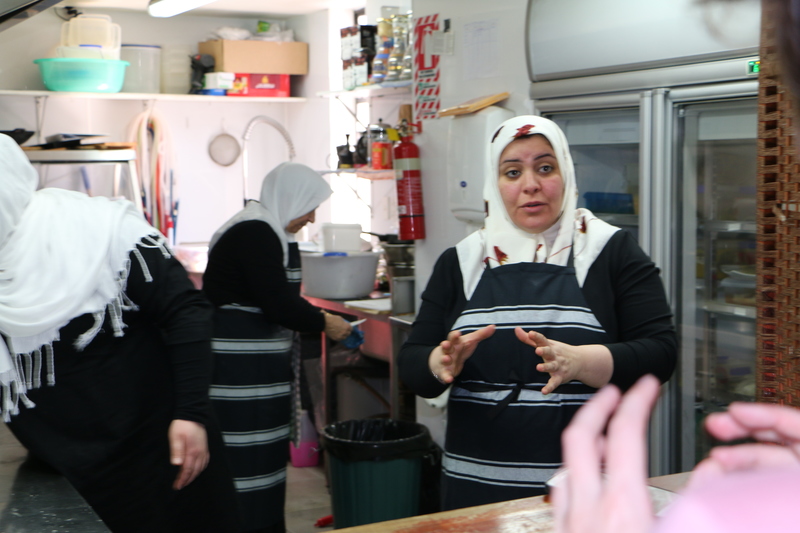 Communicating what is needed 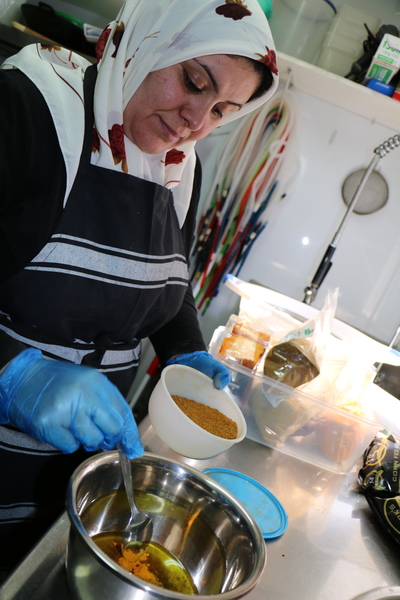 Requests to make it even more spicy 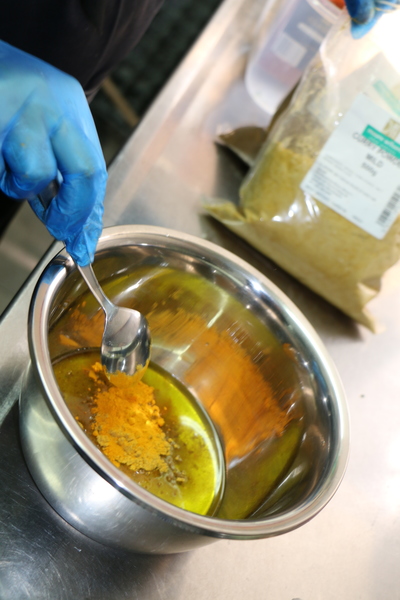 Tumeric and spices for the kofta (lamb meat balls) 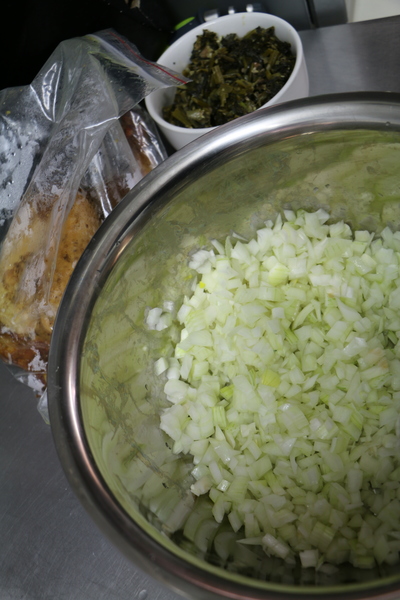 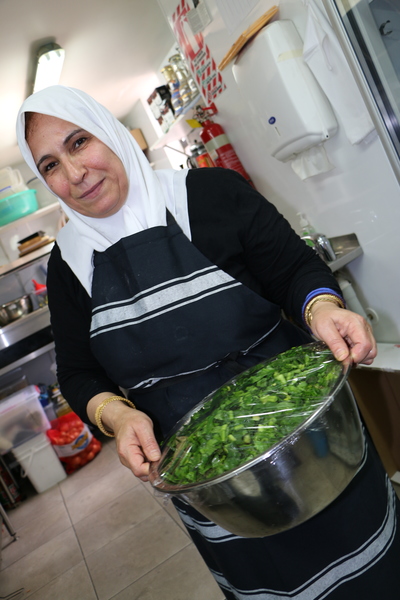 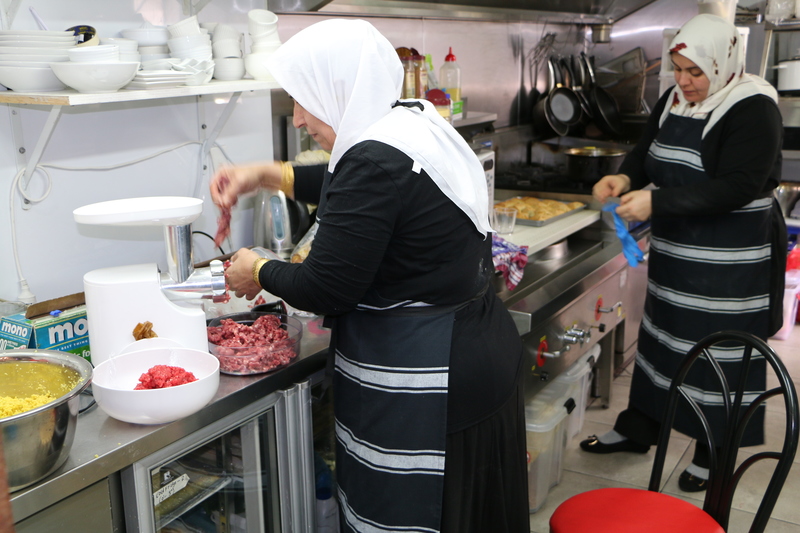 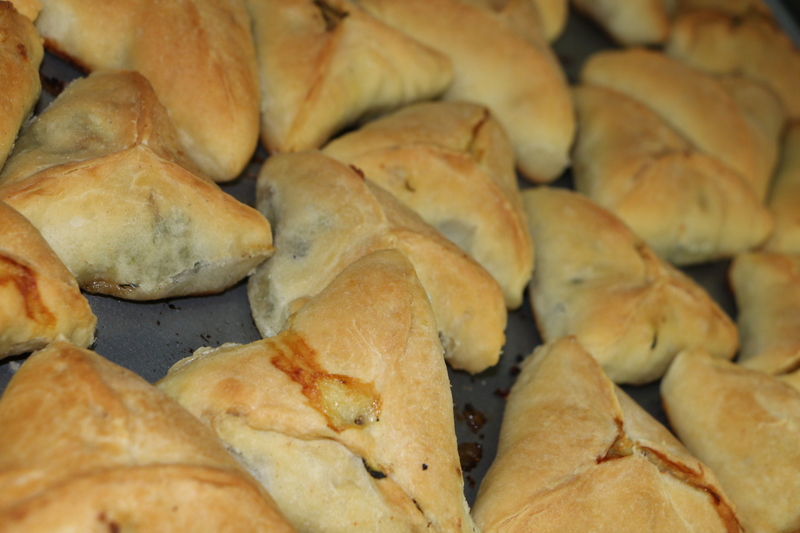 Most popular is fataiea (spinach and walnut pie) 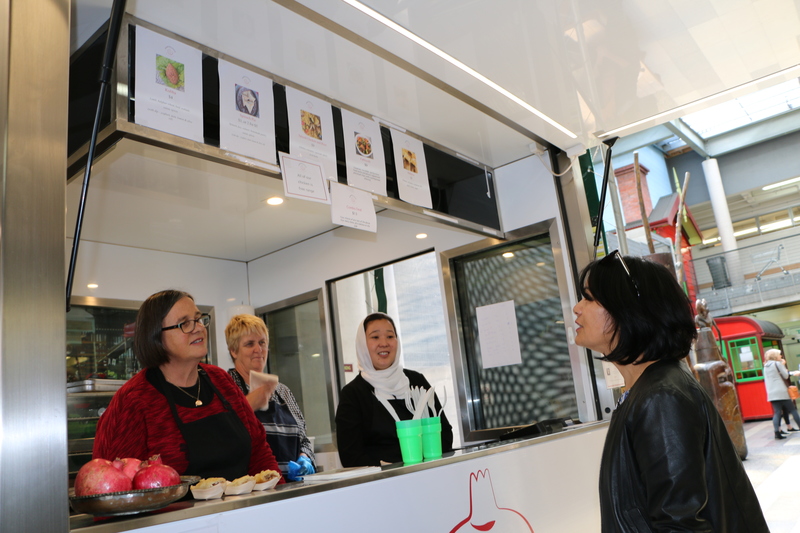 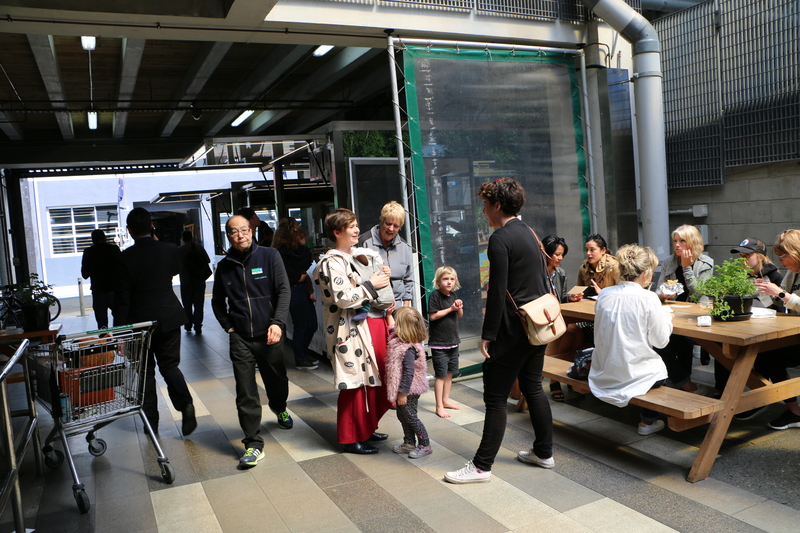 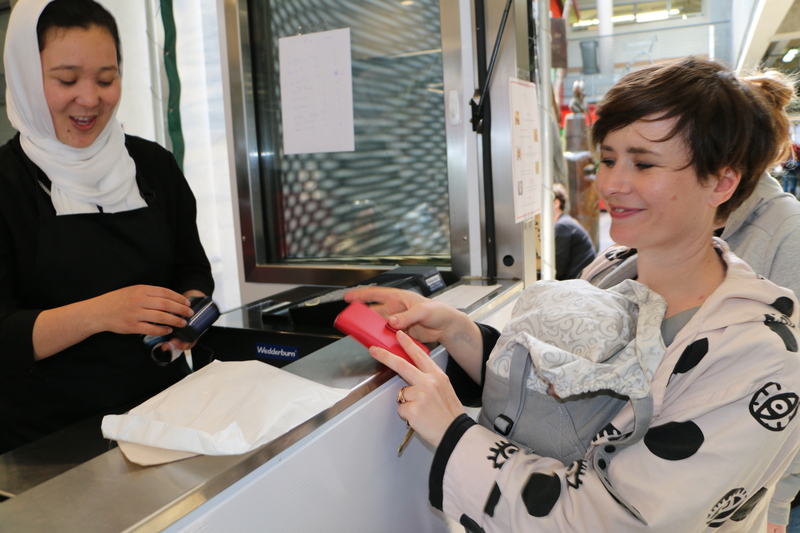 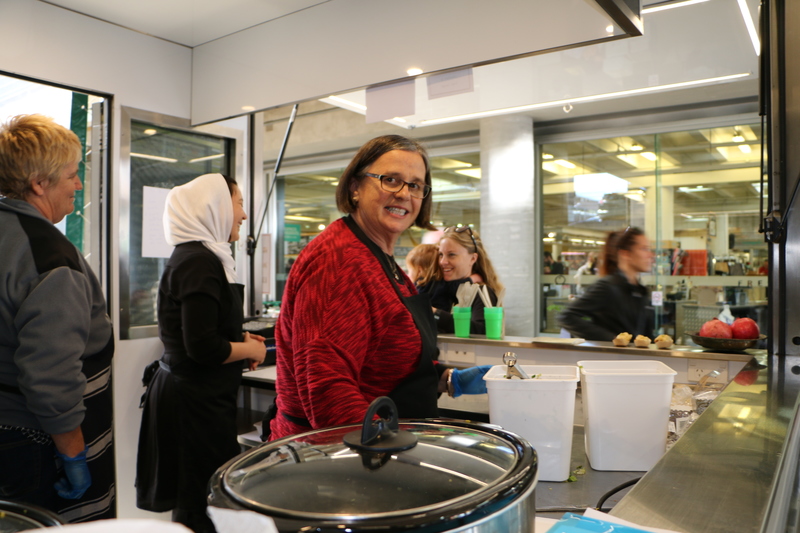 Volunteers serving at the pod 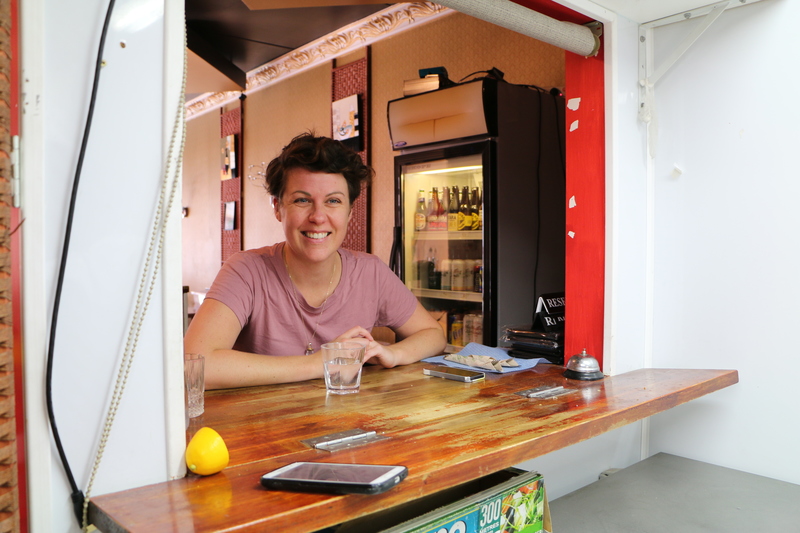 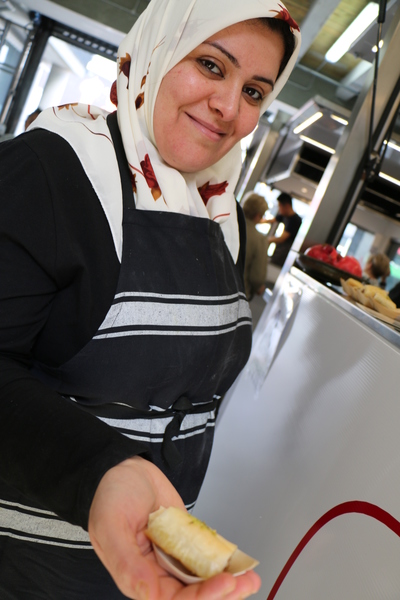 Hajar with their baklava "Afghan style" 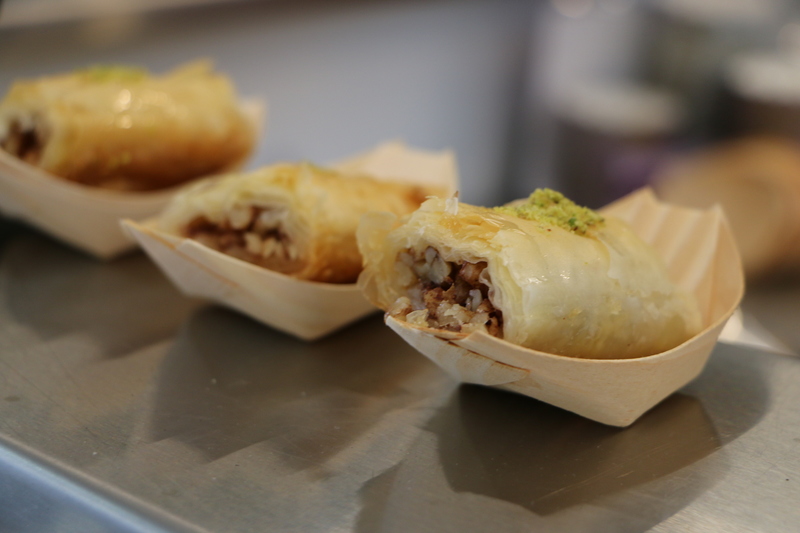 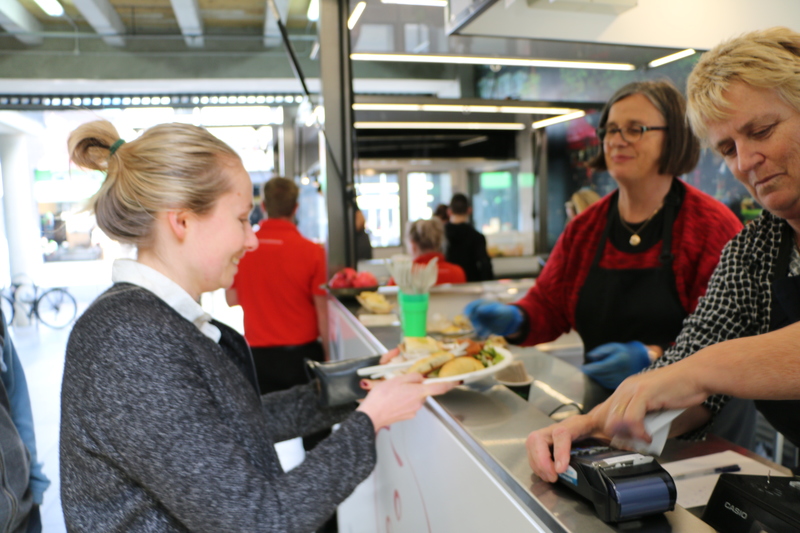 Maeve Jones is trying everything 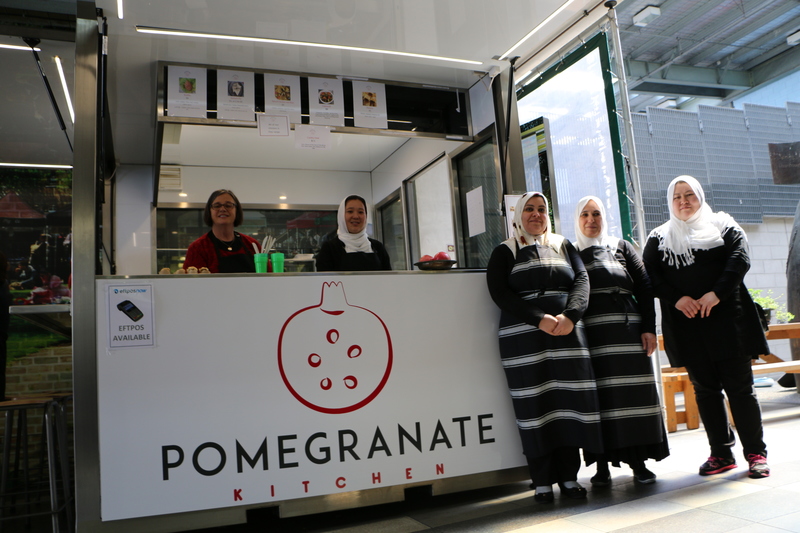 It’s mid-morning on Tory Street in Wellington’s CBD, and four former refugees are earning a living doing what they do best – making authentic dishes from their countries of origin as lunches for Wellington's workers.

Lynda Chanwai-Earle is invited into the Pomegranate Kitchen to learn more.

These women know what it is to make real sacrifices and to go through hell. As one cook, Fatima, wipes away tears, there's some comfort in the familiar action of using a mortar and pestle to blend garam masala, ginger, turmeric and cardamom. Fatima is creating pots of kabuli pulao (Afghan spicy chicken and rice) and finds the company of her fellow cooks in the team greatly reassuring.

The newly-launched Pomegranate Kitchen initiative unites women from Afghanistan, Syria, Iran and Africa and is based in Adulis Restaurant opposite Moore Wilson’s supermarket. They specialise in healing food for the soul, made by women who have a deep empathy for each others history. 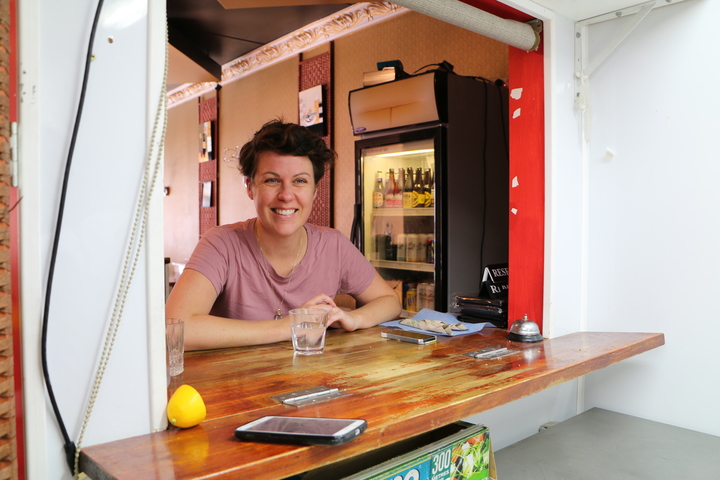 Co-founders Ange Wither and Rebecca Stewart are foodies and former New Zealand Red Cross workers. Rebecca says it was during her time with the charity that she recognised an opportunity to do more.

"I saw with the Pathways to Employment that there were a number of clients that were very capable but not being taken up by employers. My business partner Ange and I talked about the issues with refugee resettlement and how we might be able to contribute."

"Former refugees in New Zealand tell us they want to give back to this country and show they have more to offer than their 'refugee' label. We help this process by tapping their cooking skills to expand Wellington's taste buds."

The Pomegranate Kitchen is trialling their dishes at a two-week pop-up food pod at Moore Wilson's. All the food is cooked onsite at Adulis and Rebecca says the owner is happy to open up his kitchen each morning to the women because he can relate to their situation - "He comes from a former refugee background himself."

"This is a strength-based initiative. We listen to the women, we gather feedback. It's important that they feel they have a voice at every level. We facilitate training as this is sometimes a barrier for speakers of English as a second language. We provide commercial kitchen and food safety training for potential employees who need it. Through Pomegranate Kitchen, people with a refugee background can get local experience and transferable skills in order to continue their journey as New Zealand citizens."

"We're able to provide a place of employment that is flexible around language, child-care and hours in ways that some employers are not able to do."

How is Pomegranate Kitchen sustained financially?

"We are a social enterprise that is a charitable trust, governed by a Board. This means all profits go back into the business - we have no shareholders" Rebecca explains.

Fatima Qasim Ali was born in the Jaghori Zeba district in the central highlands of Afghanistan, populated by the Hazara, the minority Shia Muslims. Around 1997 the Taliban began to take control of Hazaristan. During this time Fatima was orphaned and fled to Pakistan with her aunt and uncle.

Between 2002 and 2008, over 12,000 Hazara refugees were repatriated through UNHCR.  Fatima was 15 when she arrived in Pakistan and soon after married a local man. Some years later her husband became seriously ill and died and their baby daughter was taken by his family. The rest, Fatima says, is a private history; too raw and painful to share. 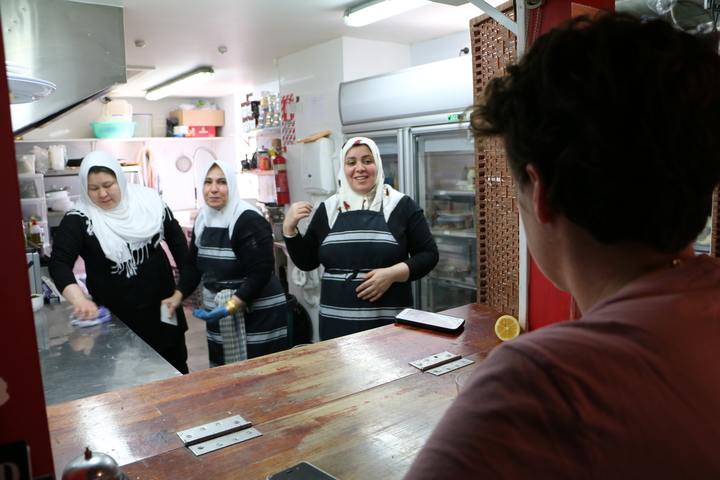 Rebecca checks in on Fatima, Muna and Hajar in the kitchen of Adulis Restaurant Photo: RNZ / Lynda Chanwai-Earle

Pomegranate Kitchen’s multilingual supervisor is Hajar Mazraeh, originally from Ahwaz, in Arabic-speaking Southern Iran. Her language skills are essential; Muna - is from Syria and can only speak Arabic, while Fatima speaks Dari Farsi. Hajar speaks Arabic, Farsi, even some Indonesian and her English is accomplished.

She knows all about managing people and food, having run a pita bread business as a refugee in Indonesia. Rebecca praises Hajar as a natural leader with a lovely way of dealing with the other women. 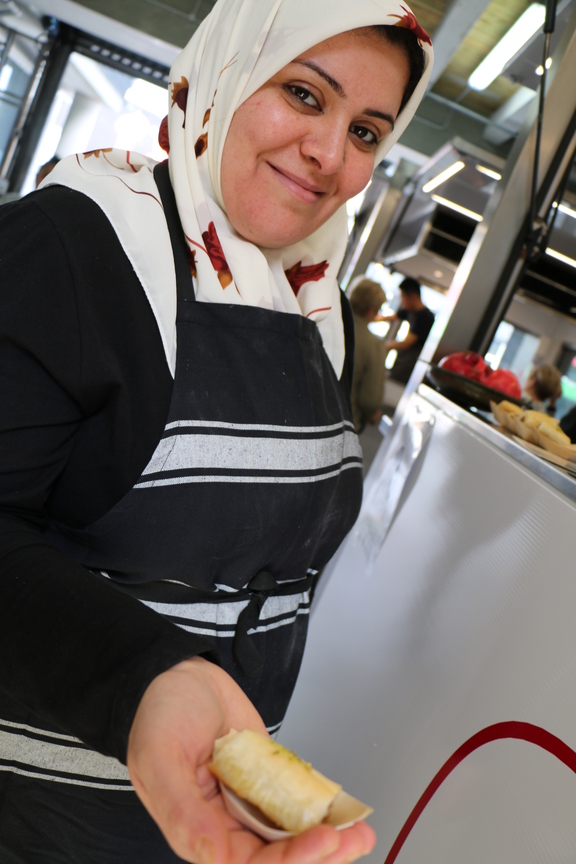 Hajar tells me that her husband and three children were forced to leave Iran six-and-a-half years ago and spent more than two years as refugees in Indonesia before finally arriving in Wellington in 2012.

"South of Iran is all Arab people, Arab people have problems, we need more independence but we can't find it. People are poor, have less rights. Most Ahwazian people left as refugees."

Hajar and her husband have four children. The youngest, who is only two, was born here and their eldest daughter is now preparing for university. Hajar is very proud of them all.

"They're studying and doing very well, they love New Zealand. They're multilingual, my son can speak some Māori. I'm very happy because they have not forgotten their culture or religion - they manage between both worlds."

And how is the supervising going? Hajar is enthusiastic.

It's lunchtime and volunteers including Rebecca's mother Deborah are serving behind the counter at the pop-up pod. The fataiea (spinach and walnut pie) is so popular it has already sold out.

"Very delicious, a combination of fresh, healthy (and) indulgent...!"

Maeve Jones is one satisfied customer. She's also Fatima's lawyer and has enjoyed being a guest at her home. She sees this kind of employment as a win-win for women like Fatima; utilising their existing skills while learning English on the job, "And now everyone in Wellington can try your delicious food!"

Fatima's smile says it all. She's found meaningful employment, surrounded by friends and meeting new people, all of them speaking the universal language of delicious, authentic food. 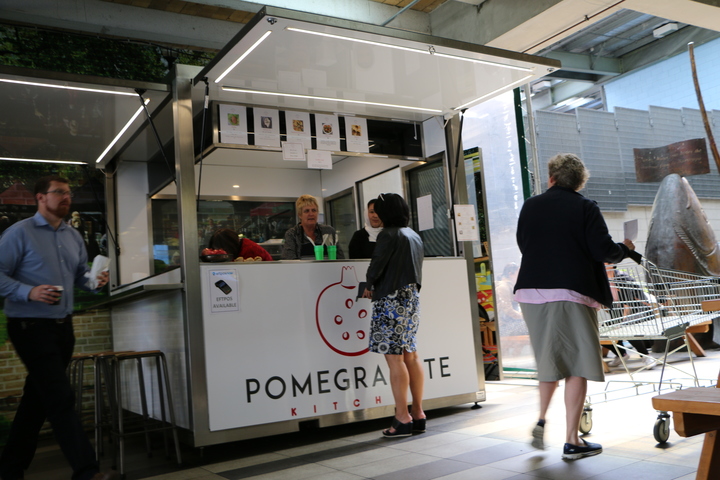