The Department of Corrections has been banned from this month's Auckland's Pride Parade as organisers say they have not followed through with promises to improve support for LGBTQI prisoners. 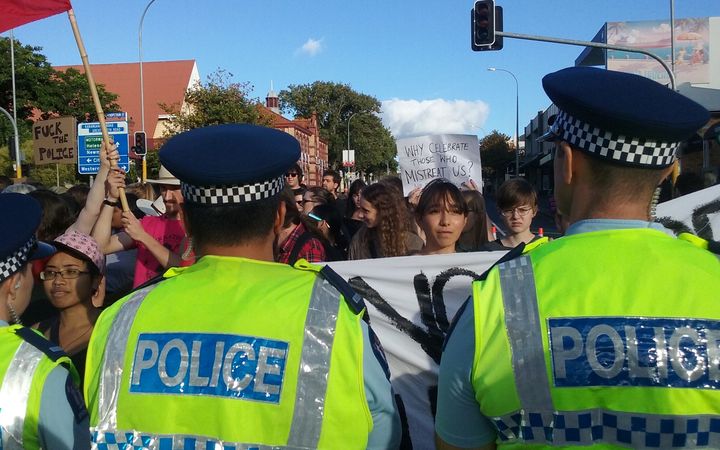 Corrections staff were able to march in uniform for the annual Auckland Pride Parade last year and in 2015.

However, the Auckland Pride Festival Board said they had failed to live up to promises made about improving the support for prisoners who are lesbian, gay, bisexual, intersex, queer, and particularly those who are transgender.

Correction's involvement with the parade has been marred in the last two years with protesters using it as a platform to challenge its treatment of LGBTQI prisoners.

Last year staff were allowed to march in uniform after the event's Board and Corrections agreed to come up with ways to support transgender prisoners through 2016.

Festival Board chair Kirsten Sibbit said they had not seen that happen.

"For us it was important to see that some of those policies they talked about last year had been implemented and that those changes were being seen at the coal face in prisons," she said.

"The information that they gave us didn't convince us that has been the case and that the commitments they made last year have been followed through."

Corrections was the only organisation to be refused participation, with around 55 groups - including police - set to parade on 25 February.

Ms Sibbit said she wanted the parade to be inclusive and the decision was about the organisation, not individuals.

"We recognise the work they do on a day-to-day basis in a very difficult environment and they do support and provide probably additional support for rainbow community people within prison facilities."

Staff would still be able to attend, but not in uniform, and had been offered the opportunity to march with other groups.

It was a move welcomed by activist group No Pride in Prisons, which protested against Corrections and the police being allowed to participate in the parade last year and in 2015.

Spokesperson Emilie Rakete said it was a symbolic victory but it needed to bring about actual change.

"It's taken us two years of very public, very bitter, drawn out critique of the Department of Corrections and they still haven't produced the transgender prisoner safety plan which they promised a year ago," Ms Rakete said.

"If two years of desperately poor PR for Corrections is not enough to get them to implement the barest measures to protect trans prisoners' safety and basic human rights nothing will do it. "

Corrections said it was disappointed with the decision.

About 15 staff marched last year after many were put off by protesters and the department had been hoping for a bigger representation this year, it said.

Acting Northern Region Commissioner Alastair Riach said over the past year the department had done "a lot" towards improving its policy around transgender prisoners and members of the rainbow community.

Trans prisoners would also be searched in accordance with their gender identity - for example, a transwoman would be searched by female staff.

Some of those changes were already underway, Mr Riach said.

However, the changes were yet to go into official operating manuals and staff had not been trained.

"Our next step is to roll this out with our staff but we've got over 3000 staff in prisons - it's quite an undertaking [and] we want to do it well."

He believed Pride Parade organisers were aware of that "but their view was that we've taken too long".

"I think running a big organisation like that, we're actually running at a good pace," he said.

At any one time, 12 to 20 prisoners out of the 10,000-strong prison population identified as transgender, Mr Riach said.

"Whilst they talk about training all of our staff, for some of them it's a rare event so that's why we just need to be careful to ensure our training is correct."