The leak in a crucial Wellington water pipe shows why residents should stockpile water in case of an emergency, says the company looking after the city's supply. 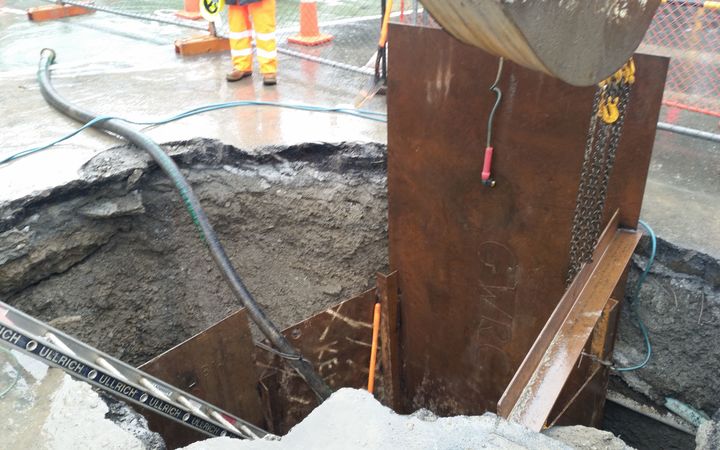 The access hole used to repair the crack in the pipe found by contractors. Photo: RNZ / Jacob McSweeny

Contractors worked through the weekend to fix the leak, which happened under a road next to Wellington's railway station and had threatened the city's water supply.

The issue was a break in a valve, near the point where it connected to the main supply and it had eroded a hole four metres deep and wide under the road.

Wellington Water acting chief executive Mark Kinvig said there was only one supply into the city and people should be prepared if it was compromised.

"We do live in an earthquake-prone part of the country, so therefore there is a responsibility for people to look after themselves. Our latest advice to consumers of water is to make sure they have got a 200 litre tank per two people in their property."

Wellington businesses have called for more emphasis on strengthening the city's water network after the incident.

Chamber of Commerce chief executive John Milford said losing water to the city would be disastrous for businesses, and would have closed the entire CBD.

"We are at risk, we need a more resilient city. We have to come up with a solution to find the money to make the city resilient. And I believe that will be a partnership between local government and central government to ensure that happens."