A group of people who rescued an Australian tourist from the bottom of an Otago rock pool deserve a medal, police and paramedics say. 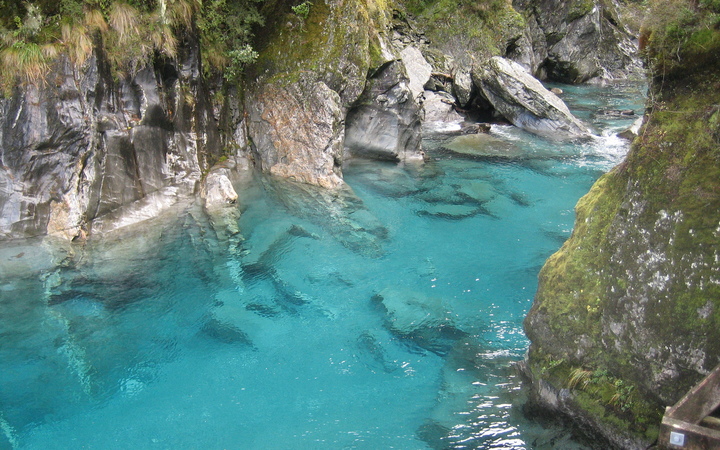 A swimmer who sunk to the bottom of the Blue Pools near Makarora yesterday was rescued by a group of people, including one believed to be a Dunedin lifeguard. Photo: Flickr.com / Stephen Colebourne

The police said the 24-year-old man was drowning in the Blue Pools near Makarora yesterday afternoon after diving into very cold water, when a person believed to be a Dunedin surf lifesaver and others went to his rescue.

Senior Sergeant Allan Grindell said the tourist was swimming in the pool when he got into difficulty. The man's friends swam out and tried to help him but had to retreat when he panicked and sank to the bottom, Mr Grindell said.

Other people who were there then dived in and retrieved the man, who by this time was unconscious and unresponsive, and gave him CPR and brought him back to life, he said.

The rescuers had done an amazing thing, and should be considered for a formal commendation for their actions, the officer said.

St John paramedic Dianne Payne reached the scene in a rescue helicopter shortly after the man was brought out of the pool.

Ms Payne said, as the paramedics arrived, they were told the patient was breathing again.

It was not clear how long the tourist had been at the bottom of the pool, but it could have been for a minute or two, she said.

The water was very cold, Ms Payne said, and seemed to have taken the Australian by surprise and caused him to seize up and sink.

He would have been dead if not for his rescuers, and especially their knowledge of good CPR technique, she said. She believed the main rescuer, who seemed to be a lifeguard, should get some kind of award for their actions.

The pools are 1.5km along a track off State Highway 6 in Mount Aspiring National Park.

The Southern District Health Board said the tourist was in a stable condition in Dunedin Hospital.