Kaikōura's mayor is hopeful the inland road in and out of the town will fully open next week. 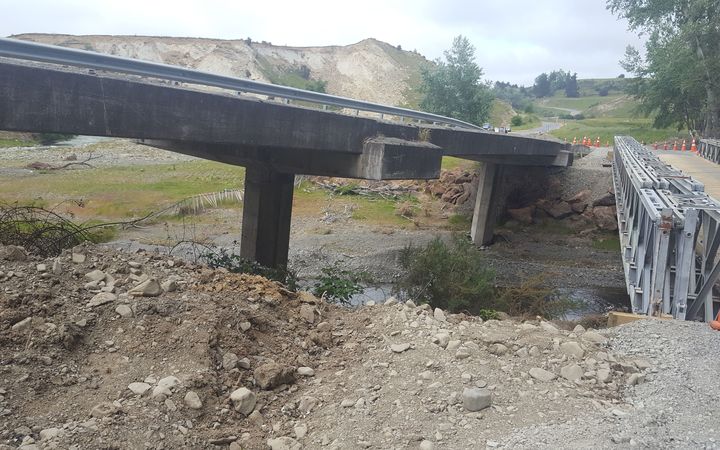 A damaged bridge and temporary replacement bridge on the road between Waiau and Mt Lyford. Photo: RNZ / Conan Young

The Transport Agency is planning for convoys along the route to continue next week.

Yesterday morning, a convoy of about 150 vehicles headed into Kaikōura, and some heavy truck and trailer units left in the afternoon.

Crews were expected to be working on the road over the weekend to create an alternate route around a particularly difficult rockfall area.

The mayor, Winston Gray, said that was the final task.

"The roads are definitely a priority - the inland route, getting that secured so we can get away from the convoy situation," he said.

Daily convoys have been travelling the inland route south of Kaikōura while the road is still under repair. Photo: RNZ / Rebekah Parsons-King

"There's an alternate route being developed, if that gets done by mid next week it will be a huge relief for everybody."

State Highway 1 both north and south of the town remain closed.

Meanwhile, the state of local emergency in Kaikōura was lifted and a new national recovery manager appointed to help the quake-hit town, along with the Hurunui and Marlborough districts.

The government announced a national transition period that would carry over many of its special powers, including the ability to prohibit people from entering certain areas.

"It can be used to bring in additional resources like the provision of transport, medical care, accommodation and the feeding of people who need it in an ongoing basis," she said.

"It makes sure that the things that allow a community to function on a day-to-day basis are in place."

Dave Brash, who recently worked for the New Zealand Transport Agency, was appointed to spearhead the transition period.