The driver of an excavating machine was critically injured by a passing train because he had not been briefed properly before his working day began, an inquiry has found.

Downer employee Paul Anderson was struck by a train near the Raurimu Spiral on the main trunk line in the central North Island, in June 2014.

He suffered multiple skull fractures, multiple brain haemorrhages, punctured lungs and was in an induced coma for three weeks.

The Transport Accident Investigation Commission (TAIC) said the machine was on the tracks to carry out maintenance and was hhit by a freight train that did not have time to stop.

Its report said the excavator was on the tracks without authorisation, probably because the driver had misinterpreted a thumbs-up signal to mean that work was about to begin, and because he was not aware of the day's work schedule.

The work did not conform with KiwiRail's standard operating procedures, it concluded.

The driver was not wearing the seatbelt fitted to the excavator. If this had happened, he would probably have been less severely injured.

The commission has also released its findings on the crashes of two trains in Lower Hutt, in April 2013 and May 2014. 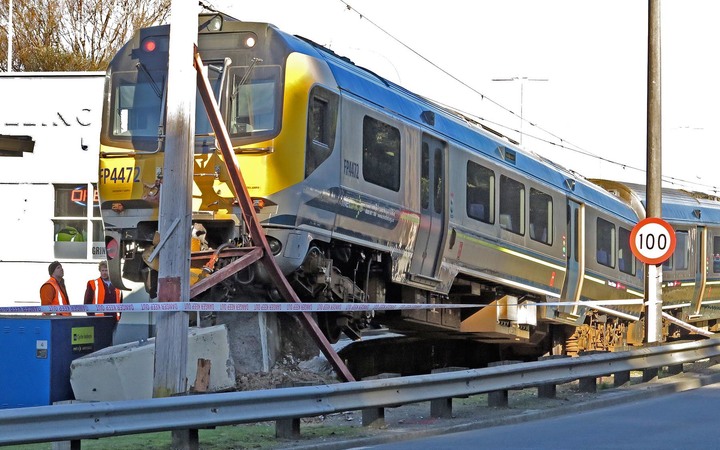 One of the trains that crashed at Melling, ploughing into a barrier (file photo) Photo: RNZ / Phil Reid

In both cases the trains failed to stop at Melling and ploughed into a special crash barrier at the end of the line.

The first one caused minor injuries to three passengers and the second to two passengers.

The commission said the crashes were caused by slippery conditions from dew on the railway tracks, and the braking systems not being optimised for these conditions.

The driver in the 2014 crash, which caused extensive damage to the train, was found to have cannabis in his system. But the report concluded this was not a factor in the crash.

"Both trains were being driven normally but the drivers were caught unaware by the slippery track conditions," the report said.

"Post-accident testing revealed that the braking systems had not been optimised for slippery tracks when the trains were first commissioned into service.

"The commission identified a safety issue whereby the current National Rail System Standards did not require new train types to have their train brake systems tested under slippery track conditions against an appropriate standard."

The commission also said the speed at which trains were allowed to enter terminating stations left little margin for error, and also found fault with the stop block at the end of the line which was rigid and had little give.

It made four urgent recommendations on braking systems under slippery conditions, and said KiwiRail had already taken action to remedy the problems.

It said KiwiRail had now tested its brakes and optimised them for slippery track conditions.

It had also reduced the speed permitted for trains approaching the station at Melling.

The stop block had been replaced with a shock absorbing buffer stop.