Passengers were told their train's brakes had failed and to brace for impact moments before it crashed into a concrete buffer near Wellington.

KiwiRail has launched an investigation into the derailment at the Melling station near Lower Hutt about 8.10am on Tuesday. The line transports more than 1000 passengers a day to the capital. 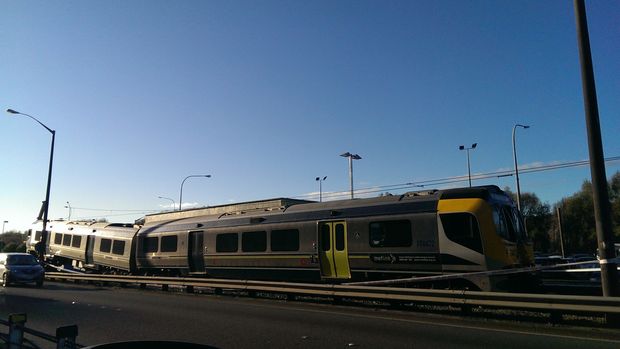 The derailed train at Melling in Lower Hutt. Photo: RNZ

Passenger Ross Moreland told Radio New Zealand's Checkpoint programme he had no idea that anything was wrong until the driver burst into his carriage.

"The driver came out of his cabin and said to brace yourselves, he had no brakes. It took a second to sink in because I actually thought he was joking to start with - and then realised he wasn't. It was quite a hard impact - it was just over in a split second."

Mr Moreland praised the driver's response, saying he was quick to check that passengers were safe and made sure they weren't in danger of being electrocuted by fallen powerlines.

Maggie Hedge was on the platform at the time and told Radio New Zealand's Morning Report programme the first unit of the train was off the rails and in the air. 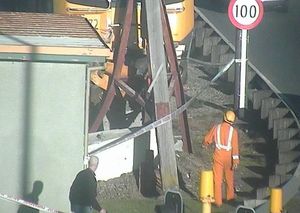 The train comes to a rest against buffers at the end of the line. Photo: NZTA

"It came into the station very, very quickly, Melling is the end of the line, it always comes in slowly, there would have been about 70 people waiting for the train and because the train was coming everybody was standing close to the edge of the platform waiting to get on the train. And It came roaring past, much, much faster, and you just knew it wasn't going to stop."

KiwiRail is reviewing data from the derailed train's black box recorder. Spokesperson Deborah Hume told Checkpoint the driver has told the company the brakes failed to work, but it is not being assumed that this caused the crash.

"You don't always know what's happening until you truly look into the details. Every train comes with a black box. We're downloading the black box and that tells us exactly what does happen - it shows us when the braking was applied, whether it worked correctly."

Ms Hume said a similar crash in April 2013 at the Melling station involved something other than driver error or brake failure, but refused to say what.

Both incidents involved one of the recently introduced and Korean-made Matangi trains.

In April last year, KiwiRail said extensive testing showed the brakes were working properly and did not believe there was a need to check the entire fleet. However on Tuesday, it said the remaining Matangi trains would be inspected, though it had no plans to take any others out of service.

The Transport Accident Investigation Commission said a report on the 2013 crash is due in August this year, but no urgent safety problems have been flagged. The commission has three staff investigating the latest crash.

Services on the Melling line have been replaced by buses between Petone and Wellington. The line may re-open on Wednesday. 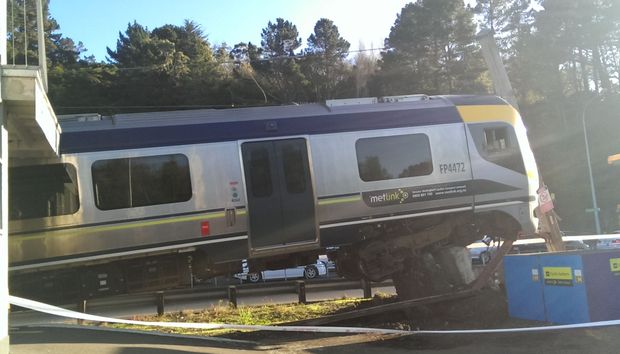 The train perched on the concrete buffer at Melling station. Photo: RNZ 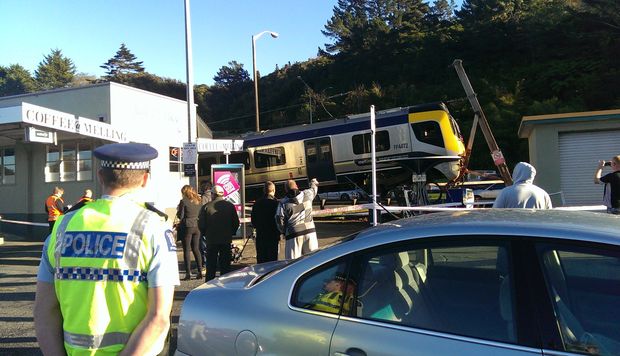