Today's convoy from Mount Lyford to Kaikōura has been cancelled after the road was closed this morning due to rain and low cloud. 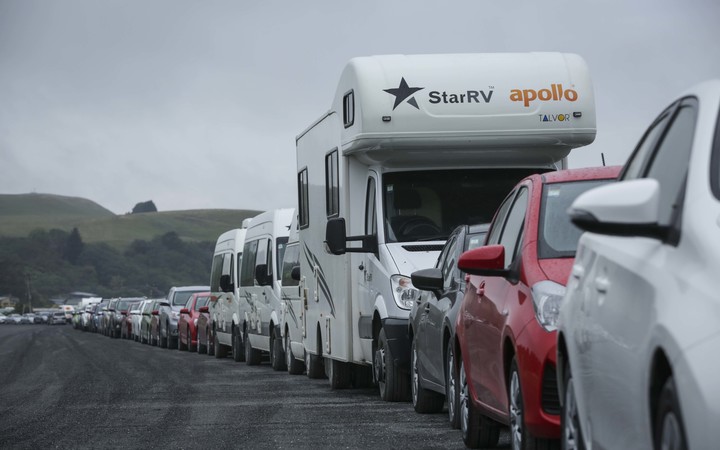 Vehicles line up waiting for the convoy to start. Photo: RNZ / Rebekah Parsons-King

A decision will be made later today on whether the convoy going the other way that was due to leave at 2pm will still go ahead.

The New Zealand Transport Agency (NZTA) is in charge of the road.

A spokesperson said the low cloud meant a helicopter had been unable to fly over the route to check the state of the road. Travel along it had therefore been cancelled as a precaution.

The announcement was bad news for a number of hire car companies still waiting to get their vehicles out of the town.

They were left there by tourists who were evacuated in the immediate aftermath of the quake.

NZTA said it was possible State Highway 1 south of Kaikōura would not be open to two lanes until well into the new year.

Contractors blasted a fifty tonne boulder out of the way yesterday, as work to clear the earthquake-damaged road continued.

The agency said about half the 25 major slips were now cleared or partially cleared.

An agency spokesman, Pete Connors, said they were aiming to get the highway open to one lane by mid-December.

But Mr Connors said getting a second lane open to the south would take longer, as parts of the highway had collapsed on the sea side and would need to be rebuilt.