The Wellington City Council has been given special powers to get information on earthquake-vulnerable buildings.

The earthquake risk of many buildings in the capital has been exposed by the recent 7.8-magnitude quake, which shook central New Zealand three weeks ago.

Mr Lester said he wanted to make sure the council had the legal power to make building owners reveal the earthquake status of a property.

Wellington City Council recovery manager Mike Mendonca has raised an alert about five properties whose owners were not revealing their earthquake assessments.

This afternoon, Mr Brownlee announced he had approved the request, as special powers were needed to manage the impacts of earthquakes on the capital's buildings.

He said the council generally had good co-operation from building owners, but a handful have been reluctant to obtain or provide their building assessments.

They can now be forced to divulge the information.

"Where we have got concerns around the future performance of the buildings, where we want more information, we'll be working to make sure we weed out any buildings that need further assessment or need structural repairs, to make sure Wellington is safe." 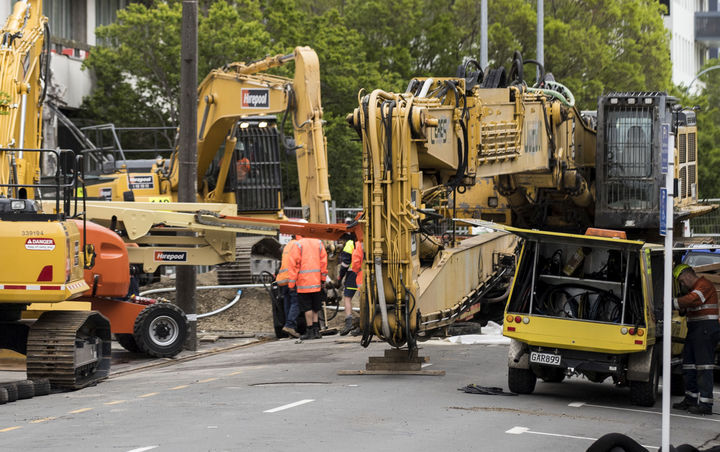 Heavy machinery at the site of a quake-damaged building being demolished in Wellington following the 14 November earthquake. Photo: RNZ / Aaron Smale

Research by a Wellington property company has indicated 11.1 percent of commercial office space in the central city is closed in the wake of last month's earthquakes.

That amounts to 167,300 square metres of floor area, and half of it is in what is classified as prime building stock.

Property company CBRE, which carried out the research, said the closures affected 50 different tenancies, ranging from small businesses with less than 100 sq/m of office space to the IRD which has just under 28,000 sq/m.

In the meantime, a large-scale game of musical chairs - and desks - was under way, with tenants opting for alternatives including telecommuting, subleasing, serviced offices, short-term and long-term leasing.

CBRE senior executive Matt Hince said tenants who worked out what to do within a day of the quakes secured the best solutions, and on better terms.

"With a lack of decent office space vacant prior to the shake, it took only one or two larger occupiers to essentially starve the market of large, contiguous space with strong seismic credentials," he said.