A flu expert is calling for health funding authorities to consider funding wider access to the free flu vaccine following research showing many people are carriers of the virus every winter without realising it. 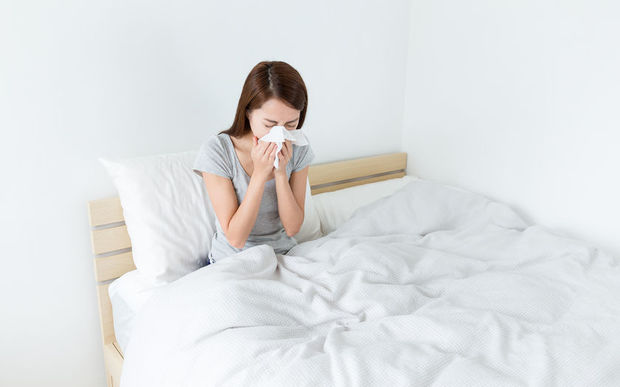 Many people are carrying flu and passing it on to others without even being aware they're sick, research shows. Photo: 123RF

New data from the Southern Hemisphere Influenza and Vaccine Effectiveness Research and Surveillance (Shivers) project shows 1 in 5 New Zealanders have influenza every year.

But two-thirds of those infected or exposed to the virus last year had no symptoms, the research found.

"You have the flu infection and you rub your nose which is the area where the flu virus replicates, and then you can have that virus passed along when you open the door, [and] shaking hands with people."

This winter, for reasons that are not yet clear, flu was at its lowest level for 24 years.

Dr Huang, also director of the WHO national influenza centres said, mild season or not, the fact that 1 in 5 contracted flu each year was a warning.

"It means we actually have to be very vigilant with flu infection during the winter time and to prevent passing the virus to other people, and also to protect ourselves."

Co-leader of the research, Immunisation Advisory Centre director Nikki Turner, said the signficiance of the finding was that there was a great deal of influenza in the community.

"Many people are carrying it and passing it on to others without even being aware they're sick, or actually only being mildly unwell."

This season 1.2 million people had the flu jab.

The vaccine is free for those over 65, pregnant women, those with long-term health conditions, children under five who have been hospitalised for a respiratory illness, and some others.

Last year in New Zealand, for every one million people there were five flu-related deaths, 14 admissions to intensive care, 382 hospitalisations and 6207 GP visits, the Shivers data showed.

Dr Turner said it was time to look at broader access to the free vaccine, moving away from just individual protection to think about national funding "for all of us who are in contact with people who may be at higher risk of severe flu."

Public hospital and aged residential care staff were able to have a free vaccine but those with babies or elderly people at home were not eligible, she said.

Virologist Lance Jennings said the current strategy was to protect the children at greatest risk from flu but, as could be seen in some years, it was otherwise healthy young children and adults who succumbed.

New Zealand should consider vaccinating all school children, as the UK is doing, to provide greater protection to those that are identified as being at risk and otherwise healthy

"And also because children are the spreaders of influenza in our community ... we are indirectly protecting other people."

Bryan Betty, assistant medical director at Pharmac, said the government drug-buying agency had received a number of applications to widen funded access to the flu vaccine and these were being considered by its clinical experts.

He said Pharmac had not seen the latest Shivers research and could not comment on it.