The last moments of Napier man Greg McPeake's life, captured on cameras inside police tasers as officers fired their weapons, were shown in court today. 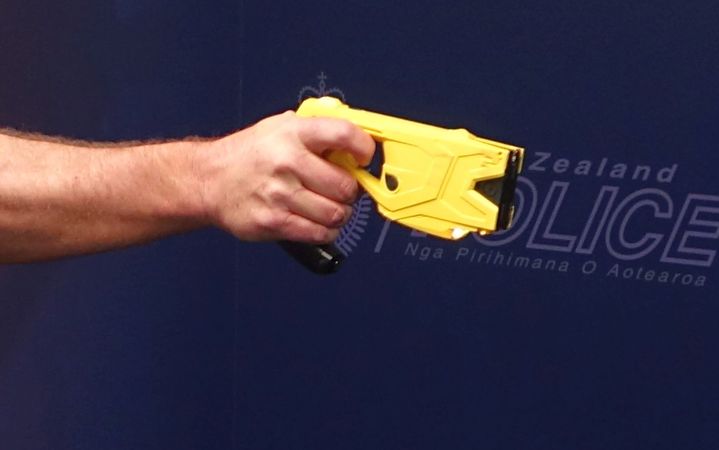 The footage was played in the Napier District Court, where four police officers with name suppression have denied assaulting Mr McPeake with weapons in March last year.

It showed officers repeatedly ordering Mr McPeake out of his car moments before two of them fired tasers and police dogs were let loose in his small Honda SUV.

Neighbours who heard the incident described hearing a calm voice repeatedly telling Mr McPeake he was under arrest and to get out of his vehicle.

It was 1am, and police had caught up with Mr McPeake, after he'd beaten his elderly father with a baton-like weapon.

When the 179kg man refused to get out of his car, two teams of officers approached from each side, smashed his windows and pepper-sprayed him, before firing tasers and setting dogs on him. With their voices raised, they repeatedly ordered him out of his car.

At one point in the three minutes of footage Mr McPeake could be seen with his hand over a dog's muzzle and he was later heard groaning.

Mr McPeake was pulled from his car and became unresponsive. He died a short time later, but the court has been told his death had nothing to do with the actions of the officers.

Earlier today, Mr McPeake's daughter Bianca said her father drank alcohol to deal with his problems. He had attended Alcoholics Anonymous meetings in the past, but had always returned to the bottle, she said.

He had a distant relationship with his parents, who he blamed for his problems.

Ms McPeake said her last contact with her father was via a text message, read by Crown prosecutor Ben Vanderkolk.

Ms McPeake said that was not the normal kind of message she would get from her father, and she needed a moment before carrying on with her evidence.

Ms McPeake said sometimes her father would talk of killing his father and brother. He would also say if his health got too much, he would park up near some water and take his own life, but she thought that was ranting.

She was also asked about her father owning a crossbow. Police officers have told the court that, on the night, they believed Mr McPeake could have been armed.

"He's always sort of had one, you know a hunter or whatever men do - so yeah, I knew he had owned one but I didn't know if he still had it or not."

She confirmed she had not seen him handling the weapon for years.

Jonathan Viljoen was working as a constable on the night, but has since left the police. He was first on the scene at Napier's Westshore, where Mr McPeake's car was parked up.

Mr Viljoen, who is not one of the four accused, said he called for back-up and then drove up the road to lay road spikes to ensure Mr McPeake didn't escape.

When he came back to the scene a short time later, Mr McPeake was out of his car.

"I saw a large Caucasian male on his side, he was barely clothed, his shirt was ripped and he had plastic cuffs on his wrist behind him."

He confirmed he saw one of the defendants giving Mr McPeake CPR, before ambulance officers arrived and took over.

Detective Damon Horrocks told the court police found at least 10 flares in a rubbish bag behind the passenger seat of Mr McPeake's car.

He confirmed the flares could have been used as a weapon.