A driver in the first convoy of private vehicles to make it out of Kaikōura since last week's earthquake says the drive this afternoon was a piece of cake. 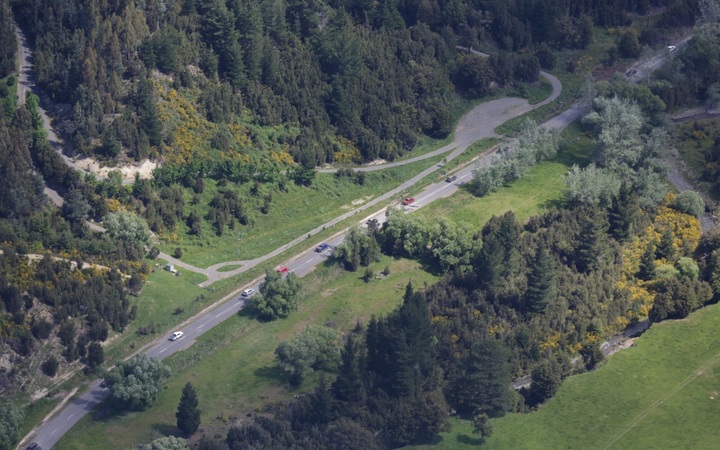 Cars and campervans were able to drive out of Kaikoura via the inland route today. Photo: RNZ / Rebekah Parsons-King

Gary and Janine Smith used their four-wheel-drive but said they could have made it in their 10m-long converted bus.

About 50 to 60 cars, 4WDs, trucks and campervans were allowed through after urgent repairs to State Highway 70, also known as the Inland Road. It was opened between 1pm and 3pm.

Civil Defence has confirmed all the vehicles in the convoy made it safely along the inland road.

Until now, army convoys were the only vehicles allowed on the road, which was badly damaged by the earthquake and still prone to landslips.

Mr Smith said the road repairs were excellent, though the slips alongside the road looked like they would be dangerous in a big aftershock or heavy rain.

"Piece of cake," he said, "put it this way - we've got a 10.5 metre bus motorhome and I wouldn't hesitate to take it through. I'd even let my grandmother drive through in a shopping basket.

"We didn't even think of putting this into four-wheel drive, nowhere near it."

Vehicles leaving after being given the green light by Civil Defence Photo: RNZ / Rebekah Parsons-King

The Smiths said they did 25-30kp/h through the risky spots and 70kp/h on the open road, led by a contractor's truck. They had made it to Waikari by 5pm and expected to be back in Christchurch by 6pm.

Civil Defence had allowed for the worst case of a very poor driver, which was frustrating as it meant they had been waiting longer to get out, Mr Smith said.

"It was very frustrating because we were hearing stories ... people coming out last week all saying that the road was good and yet we were being told, when we rung up last night, that we needed a rugged 4WD and I can tell you, you do not need a rugged 4WD to do that road.

"The slips, though, are dangerous and if there was a shake or heavy rain, I wouldn't like to be there."

Mrs Smith said the communication from Civil Defence had been poor, and if they hadn't been alerted by RNZ they wouldn't have known to assemble at the checkpoint at 1pm to get through.

The first thing they would do when they got home to Christchurch was hug their daughter, her partner said.

Civil Defence official Glenn Mitchell, who helped control the convoy at the Kaikōura end, said one vehicle broke down en route and another three got punctures, but were patched up and made it through to Culverden along with the others.

"It has run incredibly smoothly. A lot of planning has gone into today's operation and that has paid off."

The road itself appeared to have held up well, Mr Mitchell said.

Those in the convoy were "so happy" to be heading out, he said.

"They were so patient... They had to wait a long time for this opportunity. I could imagine some of them have been frustrated, but none of them were showing it today." 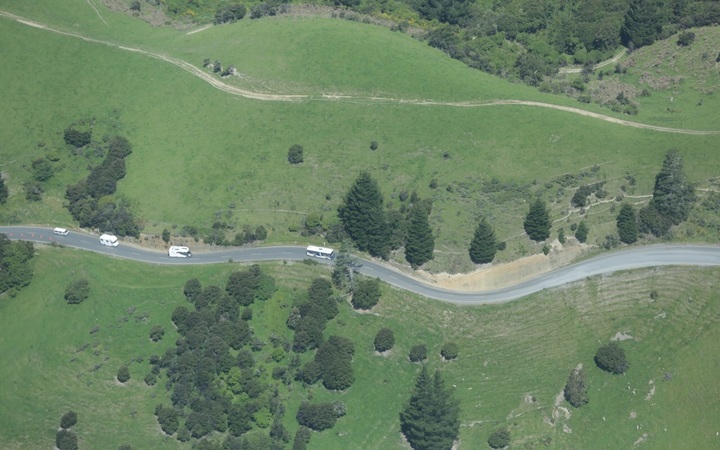 The inland route, pictured, was badly damaged in the earthquakes and the coastal route was cut off completely. Photo: RNZ / Rebekah Parsons-King

Also today, household toilets and showers were cleared for use in Kaikoura.

Civil Defence said showers should only be used every second day and kept short to help with water conservation.

Tap water should continue to be boiled for drinking.

About 100 drivers had confirmed to Civil Defence they wanted to leave today by road.

Nelson couple David and Barbara Collin made sure to get to the checkpoint, where drivers were congregating before leaving, early.

"We thought that if there was a massive queue they might get to the stage where they said there was too many," Mr Collin said.

Contractors had been keeping a close eye on about four slips which could give way because of rain overnight and again block the road, Civil Defence group controller Neville Riley said this morning.

Yellow chits allowing people to stock up with 40 litres of fuel were being issued from the emergency centre in the town.

Dozens of holidaymakers from overseas and other parts of the South Island have been pressuring officials to open the route for them, or allow them to follow an army convoy. The coastal road, State Highway 1, has been cut off since the 7.8 magnitude quake on 14 November.

People wait in their vehicles before being given the all-clear. Photo: RNZ / Rebekah Parsons-King

Tourists in campervans have had to choose whether to stay with their vehicles or find another way out, such as footing the bill for a helicopter ride to Christchurch.

Gary and Janine Smith registered with Civil Defence to drive out in their 4WD but had to leave their motorhome - a 10m converted bus - in Kaikōura.

They'd been in the town since the day before the 14 November earthquake.

Mr Smith told Morning Report he was hopeful of getting out this afternoon, but was not counting on it.

"I think it wouldn't take much to pull the pin on [allowing people to drive out]. Another small earthquake or if the rain gets any worse I think they would pull the pin sooner rather than later."

Yesterday, another army convoy arrived in Kaikōura - the fourth, and biggest, so far.

Mt Lyford residents have been able to use part of the Kaikōura inland road without an escort since a Civil Defence decision on Wednesday to allow them uncontrolled access to the route.

No further plans for vehicles to exit Kaikōura have been confirmed as yet. 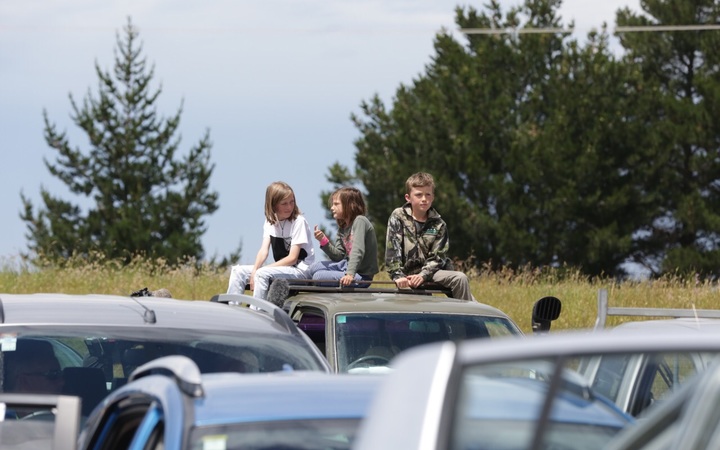 About 50 vehicles were lined up by the checkpoint by 1pm. Photo: RNZ / Rebekah Parsons-King