A prisoner who indecently assaulted a female guard - his third-strike offence - has avoided being sentenced to the maximum prison term without parole. 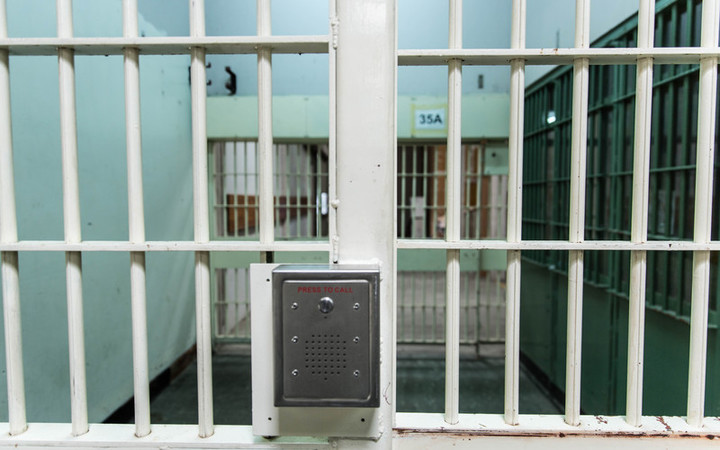 A file photo of prison bars: Raven Casey Campbell was sentenced to seven years in jail because he had committed a third-strike offence. Photo: RNZ / Claire Eastham-Farrelly

Raven Casey Campbell appeared in the Hamilton High Court today, where Justice Toogood ruled that to sentence him to the maximum seven years without parole would be manifestly unjust.

It is the first time an offender on a third strike has been sentenced under the controversial law known as the three-strikes legislation.

The 25-year-old had already received strike warnings for his first set of offending, which included receiving stolen property, possessing a knife, robbery and demanding to steal. He got a second-strike warning after committing aggravated robbery.

But while serving a sentence of three years and four months at Waikeria Prison, Campbell pinched the bottom of a prison guard.

Justice Toogood described the incident as "foolish and impulsive".

Campbell initially said he liked the prison guard and thought it was a bit of a joke but later said it was disrespectful, rude and immoral, and he was sorry for what he had done.

He was also willing to take part in a restorative justice meeting with the victim.

In a statement to the court, the victim said she felt angry and frustrated and returning to work had not been easy as she felt vulnerable.

But she also told the court that she hoped it would not impose a sentence without the possibility of parole, because she hoped Campbell would get the help he needed.

In sentencing, Justice Toogood said Campbell had limited support in the community and had spent most of his childhood in foster care. His main caregiver had recently passed away.

He had no option but to impose the maximum seven-year sentence because Campbell had committed a third-strike offence.

"I agree that is very harsh given that what you did was not the most serious assault of its type, but Parliament has determined that your history of violent offending requires a very stern response to protect the public from you and to act as a deterrent to you and others.

"It may seem very surprising that this consequence could be required by law for an offence of this kind, but that is the law and I have no option but to enforce it."

Under the law, the judge was also bound to impose a sentence of non-parole unless it was manifestly unjust.

Justice Toogood said Campbell had acted spontaneously and without malice. He said offenders who had committed similar offences had escaped prison sentences.

"But it was genuinely distressing for the victim and the court must regard as serious an assault on a prison officer acting in the course of her duty."

He said, had it not been for the three-strikes law, he would have sentenced Campbell to no more than a year in prison.

Justice Toogood took into account Campbell's relative youth, remorse and his early guilty plea. The judge said it would be "grossly disproportionate" to sentence Campbell without parole and that it would discourage him from getting help.

Campbell's case comes after the Crown appealed the sentences of two convicted murderers to the Court of Appeal.

Justin Vance Turner and Shane Pierre Harrison were sentenced to life with minimum non-parole periods of 15 and 13 years respectively for separate murders.

Both had histories of serious offending and the murders constituted second strikes under the three-strikes legislation.

The legislation states that someone who commits murder on their second strike should be sentenced to life without parole, unless that would be manifestly unjust.

Both sentencing judges found that to be the case, and the Court of Appeal confirmed that.

However, the court did increase Turner's minimum jail term from 15 years to 17 years.