Details have been provided about the extent of damage to the central Wellington office of the New Zealand Defence Force (NZDF). 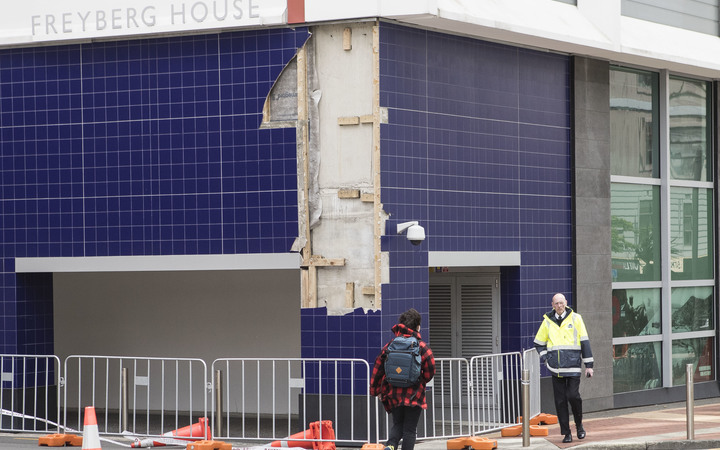 It was later taken off a list of buildings in the capital with serious structural damage, which was reduced to three: 61 Molesworth St, the Reading Cinema parking building and Statistics House.

However, Freyberg House's edifice was still badly hit and its owners, AMP Property, have described its condition in a statement this afternoon.

It said the building sustained broken windows and what it called floor disturbance.

This fits with unconfirmed reports from eyewitnesses that the quake hurled one of the building's floors into the air, after which it crashed back down on its supporting columns.

Structural engineers were still trying to get full access to the building to complete their assessment.

The statement said remediation would be required but a programme of works has not yet been established.

RNZ has kept a running list of all the buildings affected since the quake last Monday morning, and has marked them in the map below.

Last week's earthquake - and the immediate aftershocks - have caused the most extensive damage in Kaikōura, as well as in other parts of north Canterbury and Marlborough.

The Hutt City Council has closed two roads by the largest shopping mall in the southern North Island, following the recent series of earthquakes.

Remediation work is about to begin on one parking building at the Queensgate shopping mall, and as a safety precaution the footpath and road on the corners of Waterloo Road and Bloomfield Terrace have been blocked off.

The mall owners earlier reported damage to the structure of one building and said they feared it could be compromised further by any significant aftershock.

The engineers have recommended structural strengthening and managers have said this work has been ordered with urgency.

Until it is completed, the bulk of Queensgate Shopping Centre will remain closed, although some shops such as the BNZ, Post Bank and Countdown have opened.