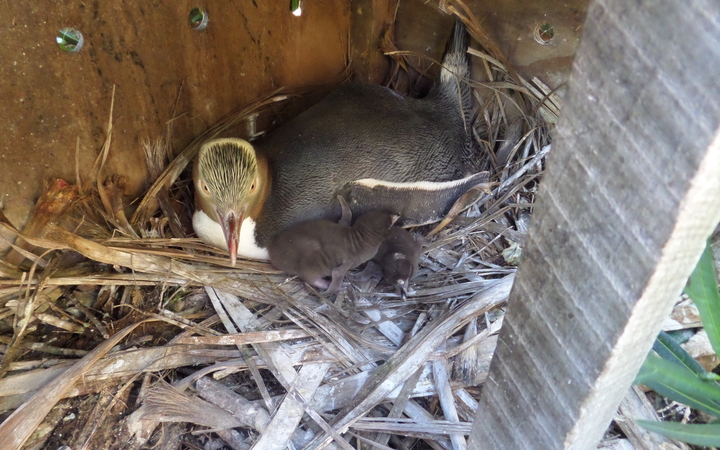 These two chicks were among the first to get sick, but were treated and are now doing well, Penguin Rescue manager Rosalie Goldsworthy says. Photo: Supplied

Outbreaks of the disease have been occuring every second season on average for at least the past 17 years and young chicks are particularly vulnerable to the disease.

Penguin Rescue manager Rosalie Goldsworthy, who looks after two colonies on the Moeraki Peninsula, said 31 out of 85 chicks hatched this year had died - many before they could be treated with antibiotics.

The disease first took hold in 1999, and at that point there were more than 600 breeding pairs on the mainland.

That population had declined to just 200 breeding pairs.

"In my view a population of only 200 breeding pairs is highly endangered," Ms Goldsworthy said.

"We believe that deaths at the chick stage from this disease has contributed to this decline."

More research needed to be done to develop a single-dose antibiotic, because a vaccine would take too long to develop, she said.

At the moment, chicks needed to be treated every day for five consecutive days, but by the fifth day of treatment, penguin parents were aggressive towards humans trying to handle their offspring.

"It's serious and needs to be attended to. The challenge is trying to find a less labour-intensive treatment regime for these little chicks," Ms Goldsworthy said.

The Department of Conservation (DOC) needed to put more resources towards managing the remaining yellow-eyed penguin population, she said.

"The gene pool is shrivelling fast and that's just so dangerous for a species."

Yellow Eyed Penguin Trust manager Sue Murray said she was concerned at the developments in the Moreraki colonies, and staff were checking on chicks in the trust's managed colonies on the Otago Peninsula.

So far there were no "out of the usual" signs that a high level of diphtheria was present but it was a waiting game to see if the disease had taken hold in those colonies as well, she said.

"We are treating it as a high-risk situation."

Department of Conservation Coastal Otago operations manager Annie Wallace said DOC and the trust were working together to understand the severity of the diphtheria problem.

"Once we all know more, we will then make any necessary interventions."