Taani Bradley says every adult relationship he has had has been marked by violence and aggression. 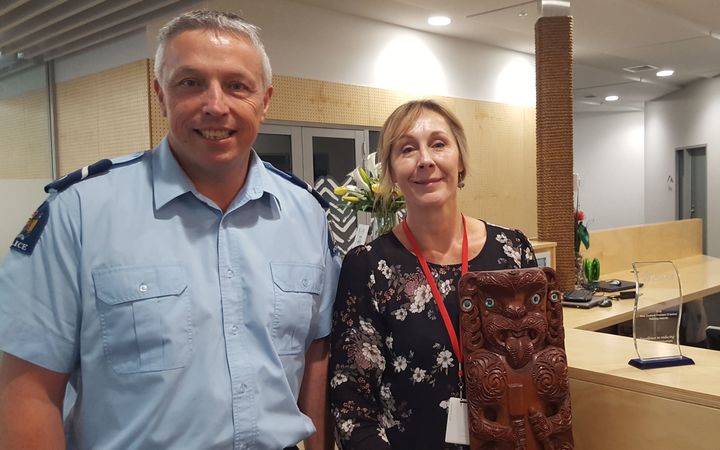 Now with the help of the ReachOut programme, the 36 year old feels he is once again in control of his emotions and happier than he has been in years.

ReachOut is operated by Aviva, formerly known as Christchurch Women's Refuge, and police and has been achieving an impressive reduction in repeat offending.

It is now also up for an international policing award, after receiving the New Zealand Problem-Orientated Policing award earlier this year.

The ReachOut programme was started in North Canterbury in 2012 after Family Protection officer Senior Constable Chris Hurring was struck by the lack of services for the perpetrators of domestic violence.

Mr Hurring said it was estimated that only about 20 - 25 percent of domestic violence is reported to police, and only about a quarter of those cases end up with charges.

Before the ReachOut programme was set up men were only able to access free counselling as part of a court order.

"The only way they could get help was if it was mandated," said Mr Hurring, "And, as we all know, if you are told you have to do something you aren't necessarily going to welcome it with open arms."

The programme is offered to anyone police come into contact with when they attend a family violence incident, but people can also refer themselves.

Mr Hurring said 37 percent of men offered the service had taken it up, which is high compared to the take up by women who have been abused, which is around 25 percent.

"What we are also finding is that they might not be taking it up the first time, or the second, or maybe even the third, but sometime in their lives there will be that spark moment and they make the decision that they do want to talk to someone. That they do need help."

The programme is starting to show results, with no one who took part in the first year reoffending.

In the following two years only 1.4 percent reoffended, compared with 18 percent before the programme was set up.

Aviva's chief executive Nicola Woodward said it was a very different from the standard approach by women's refuges and police.

She said in the past the attitude was that women needed to take action to be safe, but that didn't take into account how difficult it could be for women to seek help.

"Many women want to remain in their relationships, or feel unable to leave but want the violence to stop," Mrs Woodward said.

"What women have told us is that as result of ReachOut, they are now feeling more confident and comfortable about reaching out for help themselves. Perhaps accepting that offer of support because they know now that there are choices available for their partner. And if, now that choices are available for their partner, they see that their partner doesn't want help - that can provide women with some insight into whether this (relationship) is going to work."

Taani Bradley said in his previous relationships, he was always convinced that it was the women who were causing him to behave in the way he did.

His current partner suggested he contact ReachOut but initially he wasn't interested. After yet another blazing row he decided something had to change and contacted the service.

Mr Bradley said initially he had weekly one-on-one sessions with his support worker, where they talked about his behaviour and plans for making changes.

For example, he now has a plan to head off for a 20 minute walk any time he felt anger rising in him.

"I never used to do that. My 20 minutes walk (in the past) was probably 20 minutes of throwing stuff around the house and doing damage and yelling and screaming. But now it's a safer environment for my family and myself."

Mr Bradley said he had been worried about what he was in for with the sessions, but found a comfortable and non-judgemental environment.

"I could blurt my story out and get it all out. That was probably the best thing to get it all off my chest. Just having someone sit there listening, understanding, was a comfort for me. Cause I'd never had someone to talk to like that before."

He said he still had a way to go, but felt more in control and happier than he had in years.

In May the programme was awarded the national POP, or Problem-Orientated Policing award. Chris Hurring and Nicola Woodward were then invited to attended the international POP conference in Phoenix, Arizona in the United States, and the programme was selected as one of seven finalists for the supreme Herman Goldstein award for excellence in Problem-Orientated Policing.

The conference runs from 24 -26 November, with the supreme winner announced on the final day.