It could take months for hospitals to catch up with the backlog of planned surgeries after a strike by junior doctors, a senior doctor says. 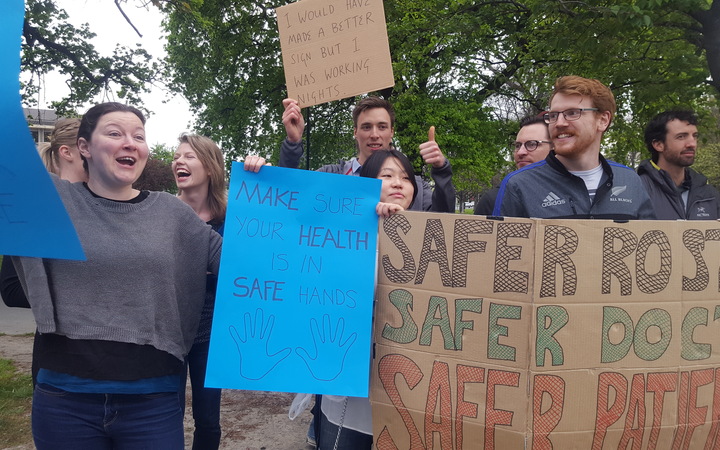 A strike by junior doctors around the country is heading into its final 12 hours and will end at 7am on Thursday. Photo: RNZ/ Maja Burry

About 2500 junior doctors are in their second day of a nationwide strike over rosters that they say are unsafe and must change.

Both junior doctors and district health boards say hospitals have run smoothly during the 48 hour strike with no safety worries for patients.

From 7am tomorrow morning it was back to business, but that would come with its own challenges, Southern District Health Board chief medical officer Nigel Millar said.

"We have a significant challenge now because we've lost a significant number of opportunities to provide planned surgery for people, Dr Millar said.

"And of course it's not just the two days [of the strike]. We had to cancel planned surgery in the days, in the weeks before and the days coming up to the strike because of course we wanted all the patients to be out of the hospital by the time the strike happened."

There was no national estimate available of the number of cases of planned or non-urgent surgery waiting for hospitals to deal with, but Auckland DHB said about 119 surgeries had been deferred, compared to 265 cases normally scheduled on a typical day.

Dr Millar said many hospitals worked at capacity anyway, so making inroads into that could take months.

"Hopefully we'll catch up faster than a few months but we've got to be realistic that if we're using all of our planned surgery capacity and there isn't an easy way to add extra, it's going to be hard to catch up back to where we were before the strike."

He said the situation would vary between DHBs, but it would take time to catch up and that would delay surgery for some people.

"Only a matter of a week or two but it's still important when it comes to some of the more important surgeries."

In Masterton, junior doctor Courtney Brown spent much of yesterday sleeping after having come off a night shift into the strike.

Today she did baking for a local hospice, and would be back at work at 7am tomorrow, then home again before returning for the night shift.

"None of us really wanted it to come to this so a lot of us are trying to do something productive with our strike days and trying to give back to the community that we look after."

Dr Brown said it was not easy for many doctors to strike, and they hoped it would be worthwhile.

"Hopefully the message that we're really serious about safer rosters is getting through and that the DHBs listen to what we're saying and take note of that. I'm hopeful."

She said they were prepared to go through it all again - including foregoing their salary - if they needed to.

"If there's no change in the DHBs' current position I think there will be a lot of support from the resident doctors to strike further if needed."

Hospitals quieter than normal during strike

The DHBs' national contingency planner for industrial action, Anne Aitcheson, said nationwide, fewer than 10 members of the junior doctors' union have turned up to work so far during the strike.

She would not comment on whether that was more or less than DHBs expected.

"I don't think there was an expectation anywhere at all. The plans were made that the staff were going on strike and we had to plan to manage in their absence."

Anne Aitcheson said it had been quieter than normal in hospitals during the strike, apart from some major hospitals that have dealt with a large number of orthopaedic cases.