Auckland's central city local board wants a plan to build a walkway 75 metres into Waitematā harbour stopped in its tracks, saying it's expensive and unnecessary.

Auckland Council development agency Panuku wants to build the walkway from the end of the wharf to a proposed mooring structure needed for giant cruise ships. 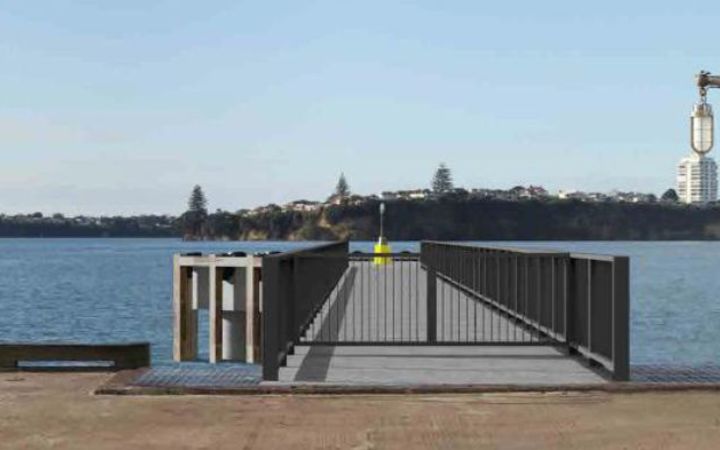 The proposed structure, known as a 'dolphin', is part of a short-term answer to berthing new-generation cruise ships too long for the wharves.

The mooring structure and walkway are estimated to cost ratepayers between $10 million and $12m.

Newly-elected Auckland mayor Phil Goff, who was unaware of the plan until contacted by RNZ, has already demanded a report from Panuku weighing up less intrusive alternatives.

Phil Goff said he accepted the need for the dolphin, but not for the 3.5m wide walkway, given the relatively few days in a year that cruise ships would need it.

"Just as the pilot going out to bring the ship in is carried by boat, I see no reason why a boat could not take those required to tie up the ship to the dolphin in the same way," he said.

Waitematā Local Board chair Shale Chambers said he had been briefed on the plan and hoped Mr Goff could stop it before it went to a resource consent hearing.

"It's a nice-to-have and it comes at a considerable cost, and my personal view, and the informal view of the board, was that it would be considered a wharf extension, and in the current environment was unnessary."

Last year thousands of people took part in protests against a planned 100m extension of Bledisloe Wharf into the harbour.

A Ports of Auckland spokesman said health and safety requirements meant taking lines staff by boat to the proposed mooring structure was unsuitable.

The port company said the walkway was needed as an escape route for staff tying up the ships.

Panuku executive Rod Marler said the original design was for a narrow functional accessway, but it was decided to widen it and open it to the public.

But Shale Chambers said he was not convinced by the port company's health and safety argument.

The resource consent application was lodged by the council agency on 30 September, eight days before the local body elections that brought Mr Goff to office.

"I've made it clear to council and to the council-controlled organisations that when any matter that may be controversial comes up, I need to be advised on that; I expect that to happen on each and every occasion," Mr Goff said.

He had asked Panuku to look at other options that did not require a permanent connection to the dolphin, he said.

It was not clear how many years the dolphin would be needed.

Captain Cook Wharf is intended as the long-term base for giant cruise ships, once major re-development work was completed.

Visual impact would be 'minor'

The new generation of larger cruise ships is the most immediate problem facing the port's capacity.

The economic benefit from the cruise industry in 2014-15 was estimated at $190 million.

The council-owned Ports of Auckland ruled out allowing the largest cruise ships to continue using general cargo wharves at Jellicoe, prompting the multi-agency approach to find a short-term answer.

The first cruise ship too long for available wharves in Auckland arrives this summer - the 384m Ovation of the Seas will have to anchor in the harbour and have its passengers ferried ashore, during three visits.

Ports of Auckland said two booked cruise ships would need the dolphin mooring structure in the 2017-18 season for four visits. 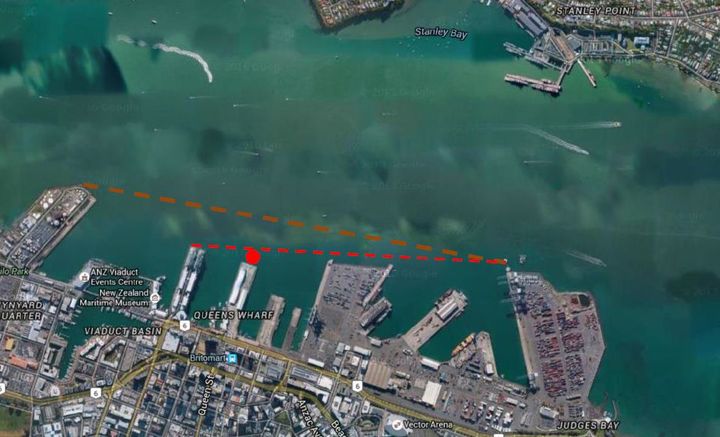 The location of the proposed mooring dolphin within the Auckland CBD waterfront area. Photo: Supplied

Two further large ships are tentatively booked for 10 visits, if the dolphin was finished in time for the next cruise season.

Panuku's resource consent application argues that the visual impact of the walkway and dolphin would be minor.

"Sensitivity to change in this location is relatively low given its City Centre and Working waterfront context and that the proposal would build upon the existing character of the surrounding port and waterfront environment despite the reduction in coastal waters," the consent application said.

The application will be formally notified on Tuesday and is open to public submissions which will be considered by independent commissioners.