Hundreds of people have been stranded by the cancellation of four Jetstar flights on the last day of the school holidays. 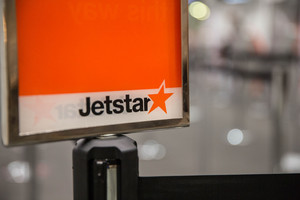 Jetstar has been unable to fully crew its services because staff are unwell Photo: RNZ / Claire Eastham-Farrelly

About 600 passengers were notified last night by text or email that the flights between Wellington and Auckland were grounded for reasons of illness.

Jetstar said it was unable to fully crew the flights because staff are unwell.

The airline has apologised to passengers and said it was finding them other flights to get them to their destination as quickly as possible.

The E Tū union's head of aviation, Kelvin Ellis, said it would be talking to Jetstar to see if it had its staffing levels right.

He said airlines ran on lean staffing and by the end of the school holidays flight attendants had been exposed to a lot of illness because of the high number of children travelling at that time.