The rain which caused floods and slips in Huntly this afternoon has stopped and the water is subsiding, says the Fire Service. 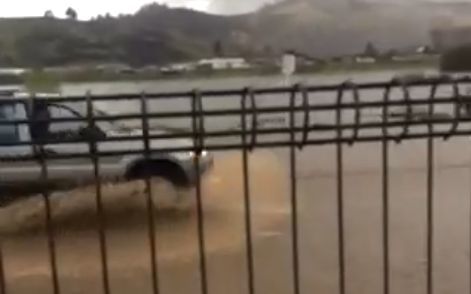 Huntly chief fire officer Craig Bush said most of the water had been pumped away.

"We still have one house that the people aren't staying in tonight cause there's been a slip come up against it, so we're just waiting for the authorities to confirm the safety of that.

"But basically just a whole lot of mud and water that we're just getting rid of now."

Earlier Great South Road in the Waikato town was under a foot of water and half the road was blocked by a major slip.

Diversions are in place on Riverview Road where another slip took out a laundry, carport and car. 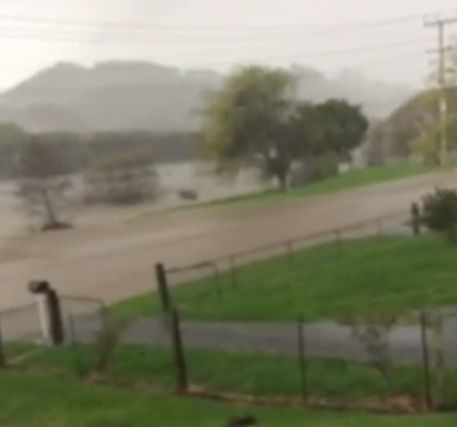 He said it had been dramatic but the water had not flooded houses near him.

"The guttering couldn't keep up with it, you see it overflowing, the neighbour's guttering and our guttering. And the little creek next to us, it couldn't keep up either and that flooded, and flooded the road and cars couldn't get through for awhile."

The Fire Service has three crews at the scene helping people to clean up.

If you are heading to Auckland via Huntly be patient. It's a shocker pic.twitter.com/jHVGq1nDJF

The Fire Service earlier tweeted that Riverview Road in Huntly was in danger and cars were at risk of being washed into the Waikato River.

There are several small slips along the western side of State Highway 25 between Thames and Coromandel, but the Transport Authority said they were all passable.

Are you impacted by the weather? Contact RNZ at iwitness@radionz.co.nz 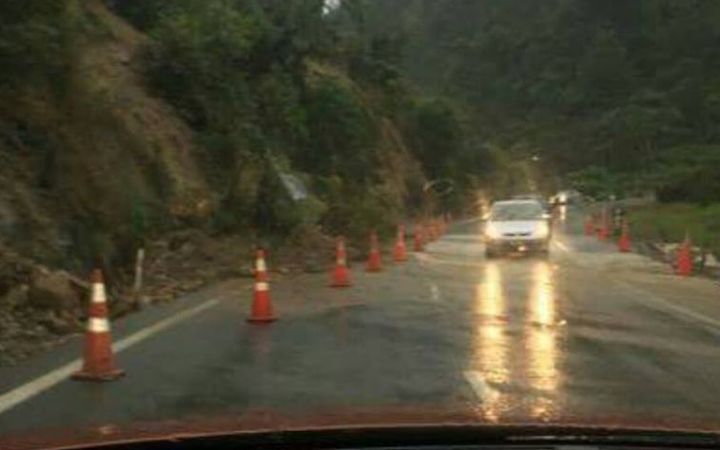 MetService said there had been significant rainfall over Auckland and Coromandel and there was still a risk of some flooding from localised showers.

"Anywhere in the north of the country there's saturated ground, and a localised heavy shower will cause problems maybe slips or surface flooding, so everyone just take care and keep up to date with the latest forecast."

Meanwhile North of Auckland, it tweeted that trees would be removed in Waiwera and one lane had now opened on Waiwera Road. The slip was expected to be cleared early this evening.

About 2500 houses in north Auckland lost power this morning due to a suspected lightening strike.

Lines provider Vector said power had since been restored to nearly all homes.

Warmer than average temperatures are expected across the country over the next three months, especially in the east of both main islands.

The National Institute of Water and Atmospheric Research (NIWA) outlook for October to December is for above average temperatures for the north and east of the South Island and the east of the North Island.

"It's been rather wet along eastern areas of both islands and that's because of an easterly type wind."

The recent weather patterns were expected to continue through spring and into summer, he said.

Although it was too soon to tell if temperatures would break records, it was likely they would in parts of the country, Mr Brandolino said.