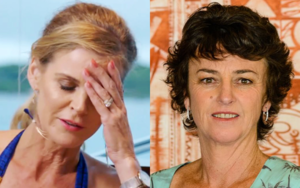 Ms Sloane was criticised by Dame Susan Devoy for using a racially offensive term on a reality TV show, The Real Housewives of Auckland.

The commission said in a statement that lawyers representing Ms Sloane had contacted it, accusing Dame Susan of defamation.

"We regularly comment on issues already in the public domain whether they be relating to a politician's speech, a rugby game or a reality TV show."

An episode broadcast on 20 September had shown the group of women at the centre of the show holidaying on a yacht in Port Douglas in Queensland.

Bravo, the channel behind the show, issued a statement ahead of the airing of the episode saying that the matter had been taken seriously.

The incident was described on the front page of the Herald on Sunday ahead of the broadcast.

That article reported that Ms Sloane and her husband had called in lawyers in an attempt to have the controversial moment removed from the broadcast, reasoning that the term was something the couple occasionally used in a tongue-in-cheek way and that it was never intended to be racist.

The Race Relations Commissioner sits under the Human Rights Commission.

The commission had no further comment at this point.