Children as young as five are among a growing number of people visiting optometrists with eye problems from excessive screen use.

A national survey of almost 50 optometrists by lense company Essilor found nine out of ten were concerned about the number of people coming to them with symptoms of dry eyes, eye strains and headaches caused by screens. 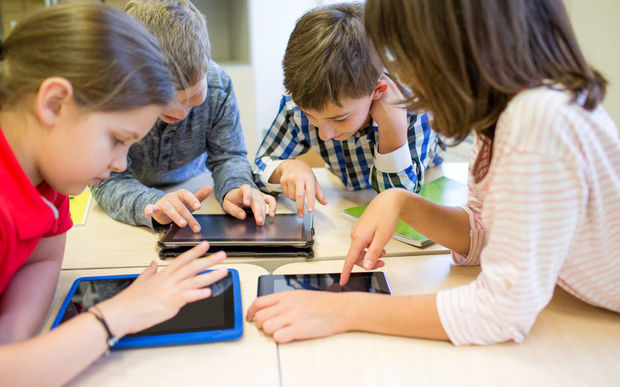 Primary school children are among patients coming to optometrists with symptoms of excessive screen use. Photo: 123rf

Optometrists who took part in the survey said those most affected were aged between 30 and 40, and one in five said in their experience, teenagers were also in the highest risk group.

Some also reported seeing primary school children, including five-year-olds, with symptoms of excessive screen use.

Auckland optometrist Bruce Nicholls said many people were looking at phone screens up to 150 times a day, along with additional exposure to computers and tablets.

The common symptoms were all linked to high-energy blue light, which he said could cause significant long-term damage like cataracts and long-term degeneration.

"What we are seeing now is that concentrated numbers of hours spent in intensive screen time while gaming and even long work days are causing noticeable symptoms in device users.

"Over-exposure to that blue light - which occurs on the light spectrum next to harmful invisible ultraviolet light - could cause significant, long term damage."

Focusing too close for too long placed stress on eyes and would lead to a dependency on prescription lenses, he said.

People needed to take breaks, turn brightness down, have screens further away from their face or use a blue light filter.

"The screen doesn't need to be as bright, and it's all about intensity and duration as well," Mr Nicholls said.